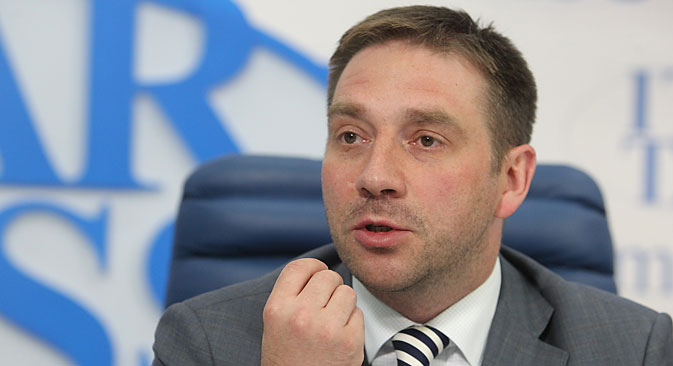 Deputy Minister of Economic Development Sergei Belyakov has been dismissed from his post for breaking a law banning government officials from making public statements on the work of their agencies. The minister had earlier apologized on his Facebook page for the government's decision to continue diverting money from state pension funds in 2015.

Deputy Minister of Economic Development Sergei Belyakov has been dismissed from his post after publically apologizing on his Facebook page for the government's decision to freeze the state pension fund in order to fill holes in the federal budget for a second year in a row.

According to the announcement of the firing on the Russian government website, the official was dismissed for breaking a law banning government officials from making public statements on the work of their agencies.

Belyakov opined that the decision to freeze the pension savings fund will damage the economy and apologized to everyone for "the foolishness committed by the government."

Pensions were frozen back in 2013, when officials decided to transfer all contributions to a distributive system in order to make payments to those currently drawing a pension. In return, Russians were promised special credits, which were to be taken into account when creating citizens' future pensions.

The Ministry of Finance remarks that the extension of the moratorium on the creation of a pension fund for 2015 may have negative macroeconomic consequences: a deceleration of GDP growth in 2015, a 2-3 percent increase in borrowing costs and even the impossibility of increasing pensions in the long term.

"The proclaimed decision essentially means refusing to use this money in the economy in general, not only in 2015. We promised everyone that this freeze would concern only 2014. I apologize to everyone for the foolishness we are committing and for not keeping our word," Belyakov wrote on his Facebook page.

Natalya Timakova, Prime Minister Dmitry Medvedev's press secretary, responded to Belyakov's announcement in the comments section, though her comments had been deleted by the evening.

"Sergei, government is a collective responsibility,” wrote Timakova. “If you are so ashamed, you know what to do. If it is tolerable, it means you did everything you could, but the political decision was made. Now it must be implemented."

The ex-deputy minister later stressed that the opinion he had expressed was exclusively his own.

In accordance with state service law

A statement on the Russian government’s official website says that Belyakov was dismissed for having "breached the law on state service."

"The decision to dismiss Belyakov S. Y. from his office was taken in connection with his breach of the requirements in paragraph 10, part 1, article 17 of the Federal Law No. 79-F3 of July 27, 2004, 'On government public service in the Russian Federation," reads the statement on the Russian government’s official site.

Freedom of speech or tightening of screws?

Nikolai Toporin, an expert on European Law at Moscow State Institute of Foreign Affairs told RBTH that the dismissal of officials for criticizing government decisions is a common practice in countries in which the government bears a collective responsibility for adopting laws.

"In countries where the government is elected by parliament with the party model, criticism made by separate members of the legislative branch can lead to their dismissal," said Toporin.

The expert made reference to the firing of Finance Minister Alexei Kudrin in 2011 after the minister publically expressed his disagreement with then-president Dmitry Medvedev and was dismissed with the words: "if he expresses an opinion that is contrary to the opinion of the government team, then obviously there is no place for him within the team."

Director of the FBK Institute of Strategic Analysis Igor Nikolayev, meanwhile, argues that this is simply the way Russian politics has always worked and it is pointless trying to fight it.

"Our system is historically built in this fashion,” said Nikolayev. “If you don't agree, you can just write your resignation and that's it. These rules of the game are actually clear to everyone… therefore demarches are certainly rare."

Read more: Russian parliamentarians to get their own social network