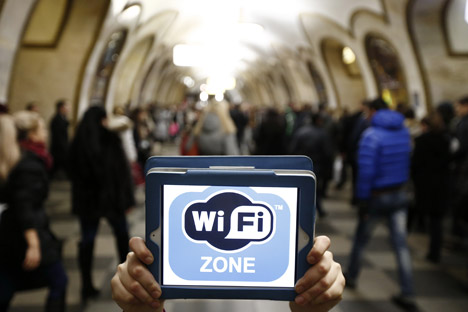 The Wi-Fi connection provider would have to collect the user’s full name and passport information, and would have to store the data for six months. Source: ITAR-TASS

A government decree demanding that Russians show their passports when accessing public Wi-Fi has agitated Russian society. A few hours after the decree was issued, the Moscow Mayor and the Ministry of Communications' press offices explained that the decision did not concern all networks.

Public Wi-Fi users in Russia will have to show operators their passports as an ID check, according to a new Russian government decree.

The decree, signed by Russian Prime Minister Dmitry Medvedev on August 8, was issued in connection with the law "On information, informational technologies and information protection," which went into effect in May 2014 as part of a bill strengthening anti-terrorist measures.

A few hours after the decree passed into law the Moscow Mayor's press office explained that the statute concerns only the specially equipped workers' stations in branches of the state monopoly Pochta Rossii (Russian Post).

"It does not concern the Wi-Fi points in parks, the metro, or universities, schools and hospitals in Moscow. Use the Wi-Fi and enjoy yourselves," Director of Moscow's Informational Technologies Department Artyom Yermolayev told the Itar-Tass news agency.

Several hours after the mayoral statement, the Russian Ministry of Communications issued an explanation, saying that operators will indeed have to ask for users' passports and will decide how to do so themselves, giving the example of “sending a request to the corresponding government organ."

The ministry confirmed that the user will also have to provide the operator with the necessary identification, such as his or her name, surname and patronymic, driving license number and so on.

According to the ministry's statement, the operator's technical request for ID will be sent to the user via text message or will appear on a special page when entering the network. If the Wi-Fi access point is set up by a private individual, they will not have any obligations concerning the changes, the ministry emphasizes.

However, it is not completely clear from the ministry's communiqué whether users who do not provide operators with their personal information will be given access to the networks or not.

In the hours that passed between the announcement of the decree and the explanations, internet users and social figures were quick to express their dissatisfaction with the news.

"In front of our eyes the Big Brother about which everyone joked for so long is being created: a system that knows who was writing, what they wrote, when, where and from which computer," wrote opposition activist Alexei Navalny in his blog under house arrest.

After the issuing of the refutation he wrote that the situation looked "rather odd." "Such a major announcement, then a few hours of silence, now a refutation. It looks like the classic general opinion test," Navalny wrote in his blog.

Some users reacted ironically to the situation and laughed at contemporary society's dependence on wireless technology. "I dreamt of a nuclear war. But I refused to go down to the bomb shelter because you don't get Wi-Fi there," wrote the Twitter user Interesno_Vsem on his feed.