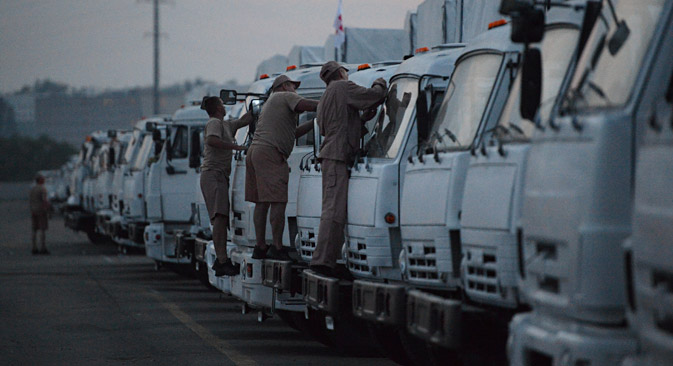 Moscow’s decision to send an aid convoy to eastern Ukraine has been received with mistrust by the U.S. and a number of European countries. RBTH interviewed a number of Russian experts on how the political scenario in relations between Russia and the West will further develop, and whether or not Moscow’s initiative is purely humanitarian.

Alexander Konovalov, Director of the Institute of Strategic Studies.

Volunteer without borders: How a Moscow expat is aiding Ukrainian refugees

Given that we’d be moving a column of several hundred Kamaz trucks, which can carry up to 1,000 tons of cargo, it is understandable why the United States and Ukraine would fear that there may be not only humanitarian goods involved. So Americans say that any non-consensual crossing into Ukrainian territory by Russia will be considered as aggression.

There is also the possibility that the trucks will go back empty. There is speculation that they may load people, including the leadership of these self-proclaimed republics, and smuggle them out of the southeast. And if that happened, I'd welcome it. Because if these people who only destabilize the situation are removed from the region, things will only get better.

The position of the U.S. and the EU is savage in nature. They want to impose new sanctions on Russia not for helping the separatists but for the provision of humanitarian aid to civilians who are being killed by the shelling of the military.

Sanctions and pressure from Washington to Brussels are destroying relations between Russia and Europe. For the EU to punish Moscow for having sent medicine and medical supplies to dying innocent civilians is a despicable act, and it will mean complete political dependence on the United States.

Also, in order to deliver weapons to the southeast, there is no need to fake a humanitarian convoy.

Regarding the speculation about the escape of the leadership from the self-proclaimed republics, I will say this: It is no problem to extract the political leadership should the need arise.

The Ukrainian army organized a powerful campaign to resume control on the border with Russia in the areas of the self-proclaimed republics, but ultimately failed. The Secretary of the National Security Council of Ukraine Andriy Paruby was forced to resign, as he was in charge of the operation to resume control of the border, which resulted in about 3,500 Ukrainian servicemen going missing.

Ukraine still has no control over large areas of the country, so speculation about the “removal of the political leadership of the republics under the guise of humanitarian support” has about the same credibility as writing on a bathroom wall. Today, too big a role is played by manipulative sources of information, non-professional bloggers, and the media.

Despite the fact that Russia is bearing serious economic and political losses, assisting the people of the Donbass, which is now under fire from the Ukrainian armed forces, is simply caring for your fellow human. Civilians are fired at with rocket launchers, which destroy their houses. They are deprived of clean drinking water and the ability to meet basic human needs. It is a human duty to save lives and to provide humanitarian assistance to the people.

Therefore, we accept refugees from Ukraine, which by various estimates, number from 500,000 to 700,000 in Russia [According to the UN Refugee Agency, however, the figure was 168,000 as of August 1 – RBTH]. And we must give aid in food and medicine to those who still remain in the conflict zone. It is our sacred duty, and we will do it, if we have the opportunity.

According to the Russian news agency ITAR-TASS, there are 280 trucks in the convoy that is delivering food, medicine, and drinking water to the needy in Ukraine. The vehicles are carrying a total of 2,000 tons of humanitarian aid.

The goods sent by the administration of the Moscow Region contain food, including 400 tons of cereals, 100 tons of sugar, 62 tons of baby food, 54 tons of medical equipment and medicines, 12 thousand sleeping bags, and 69 electrical generators of various capacities.