Beyond Moscow: Some federal units may be shifted to Siberia 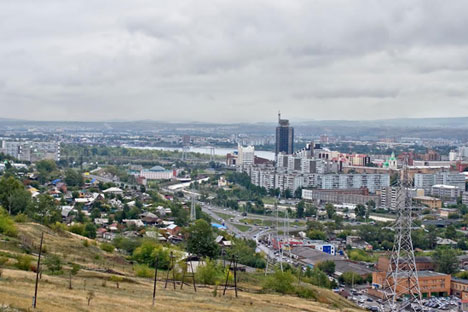 Some say that moving several federal authorities to Krasnoyarsk would be geographically convenient for the Siberian regions. Source: Lori / Legion Media

Vladimir Putin hinted at the possibility of transferring some government units to Siberia. Experts believe that such rhetoric might signify a desire by the country’s leadership to shift its orientation eastward and by regional powers to receive more money to develop the area.

Speaking at the Seliger-2014 youth forum recently, Russian President Vladimir Putin said that he “thinks it is possible and proper to move some federal and central government units to Siberia.”

One city has caught the attention of the president. “In my opinion, Krasnoyarsk (3,354 kilometres east of Moscow) is a good place for this,” Putin said, hinting that the idea of relocating to Siberia could also extend to some large state-owned companies. Dmitry Peskov, Putin’s spokesman, later clarified to Kommersant that the president’s administration has no concrete plans to move the capital. However, two regional leaders have already expressed support for some kinds of transfers: Viktor Tolokonsky (Krasnoyarsk Territory) and Vladimir Gorodetsky (Novosibirsk Region).

Gorodetsky, the acting governor of the Novosibirsk Region said that he feels that moving some federal authorities to Krasnoyarsk would be geographically convenient for the Siberian regions. According to Tolokonsky, such a step could spur the development of the region. “I hope that Krasnoyarsk will be such a centre of development of a Greater Russia, a centre of communication with the Eastern countries, where the vector of development and global politics and the global economy will be shifted,” he told Kommersant.

More autonomy on the cards for regions

Escaping from threats and evolving eastward

Pavel Salin, director of the Centre for Political Studies at the Financial University under the Government of the Russian Federation, told RIR that such ideas may be connected to a desire of a portion of the Russian elite to turn its orientation eastward. “Now, since the conflict with the West began, these ideas have taken on new momentum and meaning,” Salin said. “Moscow is widely seen as being opened toward Europe, and if the capital is a Siberian city in Russia’s geographic centre, this will imply that Russia is simultaneously like the image on its seal, the two-headed eagle: looking to both the East and the West.”

Igor Bunin, director of the Centre for Political Technologies, feels that transferring any of a capital’s functions usually signifies a desire to form a “new government” or to avoid likely threats. “For example, when Peter I wanted to get closer to Europe, he moved the capital to Petersburg. When there was a need to move away from Europe and create safer borders, the capital was shifted back to Moscow. It’s the same principle now: this solution is being proposed so that Moscow won’t be under threat,” Bunin told RIR. “In Russia this move will represent the creation of a completely different government—an Asian one. All of this suggests a desire to move farther away from Europe,” he added.

Alexey Skopin, a professor in the Department of Regional Economics and Economic Geography of the Higher School of Economics, sees only economic motives in the proposal. “Insofar as the government has substantial resources and Moscow is the primary centre of allocation, the main territories that receive them are consequently those that are closest to Moscow. If we move the capital beyond the Urals, all the budgetary resources will shift beyond the Urals and the territory close to the capital will grow, like Moscow,” he told RIR.

To transfer or divide

Skopin said that the idea of moving the capital at this stage of the country’s development is unfeasible because there is simply no other city like Moscow in Russia. “Moving a capital does not just mean transferring all the federal government entities; it also requires that you move housing for officials and the banking-services sector. Building an infrastructure from scratch is a formidable task, and it’s completely impossible for some types of activities,” he said.

However, he thinks it could be viable to move some federal functions to the provinces. “For instance, the fishing authority could be located in the Far East, or the Department of Industry could be partially moved to large industrial centres like Krasnoyarsk. The important thing is to withdraw the government authorities very carefully and only to regions that truly need these functions,” he said. He also voiced concern about disrupting connections between the officials of such ministries and their colleagues in Moscow, a situation that could complicate their work.

Salin anticipates that in 20 to 30 years, it will be entirely possible to divide the capital city’s functions. “In some countries, there’s a political capital, an economic centre and a cultural centre. Some of these capitals will probably move toward Russia’s eastern borders,” he said.

On the whole, the experts agree that it would be best to leave the capital in Moscow for now.

This is not the first step by the Russian authorities to redistribute governmental functions among Russia’s regions. In 2005 there was a decision made to move Russia’s Constitutional Court to St. Petersburg, and later to move other high courts—the Supreme Court and the Supreme Court of Arbitration—there. However, the infrastructure for them has not yet been put in place.