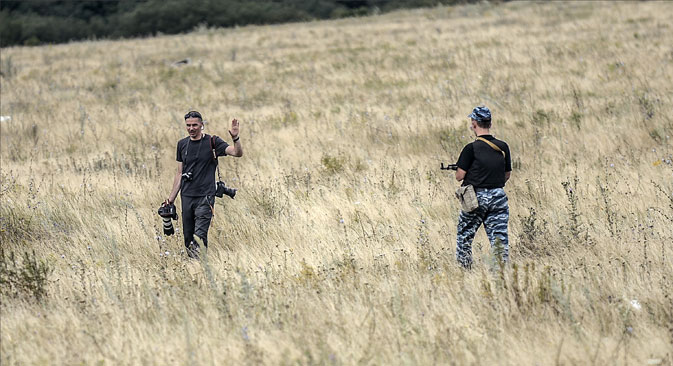 Often underrated, Russia’s official human rights watchdog can point to a number of successful actions over the course of its 21 year history.

The Presidential Council on Civil Society and Human Rights has submitted a new wave of bills to the Russian State Duma as a result of the conflict in Ukraine. One of the bills is related to the protection of journalists working in hot spots.

According to members of the council, unimpeded work by the media, both in peacetime and in war, is the starting point for the development of a civil society. The issue became a priority for the council following the death of Andrey Stenin, a photographer for state news agency Rossiya Segodnya.

The bill would obligate editors to provide equipment such as flak jackets and helmets for journalists in conflict zones along with life insurance.

This is not the first time the council has taken up the issue of freedom of the press. The council already counts among its achievements an article in the Russian Criminal Code that imposes penalties on those who forcible attempting to interfere with the work of journalists.

What is the council?

Council Chairman Mikhail Fedotov, who is also an advisor to President Vladimir Putin, said that any success the council has comes mostly through perseverance. The council is tasked with monitoring systemic problems in legislation and keeping track of individual human rights cases, developing proposals to submit to the president and relevant government departments, and monitoring their implementation.

“All problems need to be addressed very carefully, and our legislators often do not understand this. Therefore, laws adopted in a hurry are not exact. And laws that are not exact are weapons of mass destruction. We have many such laws. The council’s job is to introduce an element of reason in each case,” Fedotov said.

The council, which was originally called the Commission on Human Rights, was established on September 26, 1993. It was born during Russia’s constitutional crisis of 1993, during which then-President Boris Yeltsin dissolved the legislature and ordered an attack on lawmakers who were opposed to his policies and had barricaded themselves inside the building known as the Russian White House.

“When the ‘great sit-in’ began in the White House, we created a task force that met in the Kremlin. We gathered there every day and developed proposals for the president regarding what needed to be done. Part of this task force became the new Commission, which was headed by prominent human rights activist Sergei Kovalev,” Fedotov said.

The council, which has 61 members, includes experts from fields ranging from domestic violence prevention to fighting forest fires. According to Fedotov, the atmosphere in the council can be very tense given the range of political views. He added, however, that this diversity works to the council’s advantage, as members have to learn to respect, if not appreciate, opposing viewpoints.

Some critics of the council suggest that the body has a tendency to spend its time working on high-profile cases rather than more mundane, ongoing problems. Fedotov denies this, noting that the council cannot simply ignore single flagrant violations.

“We need to understand them and draw conclusions, to understand what the problem is: whether it’s corruption or bias in the courts, or a lack of legal regulation. Then we develop proposals, as, for example, was done following the Magnitsky case,” Fedotov said, referring to lawyer Sergei Magnitsky who died in 2009 while in police custody.

At a recent press conference, Fedotov highlighted two amendments to Russia’s Criminal Procedure Code, both initiated and adopted following Magnitsky’s death, as one of the council’s three most notable achievements. The first amendment states that all individuals under investigation may demand an independent medical examination.

The second states that the court cannot apply preventive measures such as detention to individuals accused of crimes in the area of entrepreneurship. According to Fedotov, following the amendment, prosecutions in this category dropped by 70 percent.

The council’s other two major achievements are the enactment of a law on public control over state agencies and the 2013 creation of Russian public television.

The council was also active in the December 2013 decision by the State Duma to grant amnesty to Nadezhda Tolokonnikova and Maria Alekhina of Pussy Riot, the 13 defendants in arrested in the 2012 Bolotnaya Square protests against election fraud, and the 30 Greenpeace activist arrested near the Prirazlomnaya oil platform in the Arctic Sea.

Nevertheless, according to Vladislav Grib, deputy secretary of the Russian Public Chamber, an organization that monitors the work of government bodies, it is impossible to objectively evaluate the effectiveness of the council, as it largely depends on the decisions of government agencies. “The work is done on a voluntary basis. Of course, one can note problems with the implementation of council initiatives,” he said.