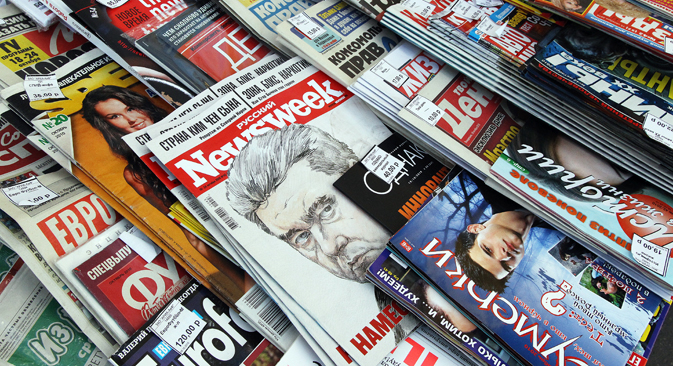 Foreign ownership is currently restricted in the media to no more than 50 percent for live television and radio stations that broadcast on Russian territory. Source: RIA Novosti

A bill in Russian State Duma would cap foreign investment in media at 20 percent of total capital.

On Sept. 23, the Russian State Duma adopted a bill on the first reading that restricts foreign ownership in the media to 20 percent of total capital. The bill was written on the initiative of the presidential administration.

The administration, however, refrained from commenting on the bill, saying it would do so only after it had officially received the document from the State Duma. The general consensus is that the bill will result in greater state control over the media.

Konstantin von Eggert, a columnist for Kommersant-FM radio said that many countries, including the United States and China, have restrictions on foreign capital in the media, but that this bill reflects the Russian government’s particular view on how journalism functions in society. “That function is propaganda, and not the fourth branch of government and independent means of control over the government’s activities. This bill is a continuation of the attack on freedom of speech and independent media in Russia,” Von Eggert said.

Ivan Pankeev, a professor in the journalism faculty of Moscow State University and the director of the university’s Center for Media Rights agreed that this law needed to be seen in the Russian context. “If there is pressure on the government, it is forced to respond in some way. Russia is responding,” Pankeev said.

Dmitry Evstafiev, a professor at the Higher School of Economics, does not think that anything dramatic will happen after the law is adopted.

“There are not and never were foreign portfolio investors in the political media in Russia,” Evstafiev said. “There were and there still are target investors who are trying to influence the situation in the country. But whereas it is now clear who these people are, transparency will decline after the law is adopted.”

According to Evstafiev, what foreign investors there are in Russia’s media market will not withdraw, but rather will “create shadowy, illegal schemes for foreign management in Russian media. The law will bring about a redistribution of ownership on the media market, and most importantly, corruption.”

In contrast, Von Eggert thinks that the law will have serious consequences for the Russian media market. “The bill will affect all publications, regardless of their genre and format. Even culinary and homemaking magazines fall under the law’s purview. The law does not add to any democracy in Russia,” Von Eggert said.

Pankeev is of still another opinion. According to him, the quality of journalism is not affected by who owns a media outlet. “The media is
primarily the people who create it. Journalistic professionalism does not depend on who pays them money – the government, business, or foreign investors,” he said.

Foreign ownership is currently restricted in the media to no more than 50 percent for live television and radio stations that broadcast on Russian territory, as well as for newspapers and magazines with a circulation of 1 million or more. According to calculations by the newspaper Vedomosti, over half of Russian media outlets will be affected by the restriction on foreign participation in the media.

The bill must pass through two more readings in the Duma, during which time technical corrections can be made. If it is adopted, it will enter into force on Jan. 1, 2017.