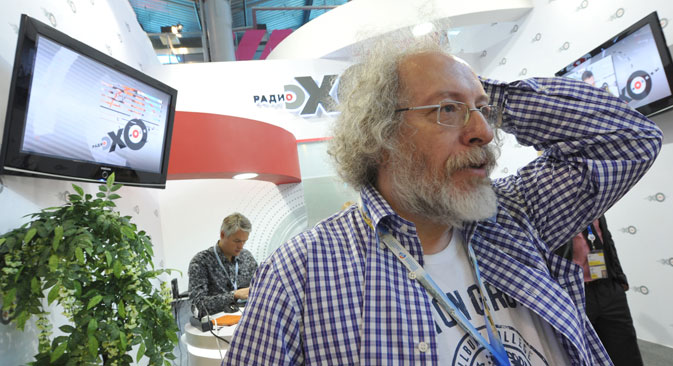 In recent months, newspapers, radio stations and websites have lost staff while new laws put restrictions on media ownership and advertising. Meanwhile, billions of rubles are being plowed into Kremlin-backed media outlets such as RT and new kid on the block Sputnik.

On Nov. 10, the Russian press was full of news announcing the launch of Sputnik, a new website with a modern, Buzzfeed-like style intended to “combat the aggressive propaganda being fed to the world,” according to Dmitry Kiselyov, the head of Sputnik’s parent organization, state news agency Rossiya Segodnya.

The launch of the website was just the latest in a series of well-funded expansions of Kremlin-backed media even as Russia’s economy staggers under falling oil prices, capital flight and rising inflation. RT, the state-run international broadcaster formerly known as Russia Today, saw its 2015 budget unexpectedly upped by 41 percent in September to $400 million, Russian news agency RBK reported. Rossiya Segodnya’s 2015 budget, meanwhile, has tripled past original plans to 6.48 billion rubles ($170 million).

But as some state-owned media aimed at a foreign audience have gained a larger bullhorn, many well-respected independent media outlets within the country have found themselves increasingly up against the ropes.

In October, a bill banning foreigners from owning more than 20 percent of any Russian media company was signed into law by Russian President Vladimir Putin. The legislation, which went from proposal to law in less than a month, will come into effect in February 2017.

The law will lead to the “lowering of editorial standards and a cutback in the pluralism of opinions,” said Andrei Richter, a journalism professor at Moscow State University. Foreign media companies, by virtue of their position outside Russia, are typically less vulnerable to state pressure.

Many independent analysts believe the ruling is targeted at business newspaper Vedomosti, which is jointly owned by U.S. company Dow Jones, British firm the Financial Times Group, and Finnish media conglomerate Sanoma. According to a report by news agency Bloomberg, Putin allies plan on buying the paper once its foreign owners are forced to sell.

No matter the reason, Richter notes that such laws are simply “the general policy of the last three years” — a period that has seen increasing restrictions on the internet and civil rights after demonstrations against election fraud erupted in December 2011.

The experience of news organizations without foreign backers, meanwhile, has shown what may be in store for Vedomosti’s reporters should the Kremlin or Kremlin-friendly owners come in.

In November, state media holding Gazprom Media dismissed a journalist at opposition-minded radio station Ekho Moskvy over a tweet. When venerable editor-in-chief Alexei Venidiktov protested, arguing that staff members could only be fired with his consent, Gazprom Media head Mikhail Lesin threatened to fire the long-time editor if he did not agree to the decision, Lesin told news agency RBK. While Venidiktov has yet to be fired, he has not discounted the possibility.

Ownership by Kremlin allies, meanwhile, may be just as bad. Also in November, the editor-in-chief of business daily Kommersant, which is now owned by Kremlin-friendly billionaire Alisher Usmanov, announced his departure shortly after the publication of an article alleging that Igor Sechin, head of oil major Rosneft, had secretly pitched counter-sanction ideas to the Kremlin.

While Kommersant's editor called the rumors surrounding his exit “conspiracy theories,” in 2011 the editor of the paper's Vlast magazine, Maxim Kovalsky, was fired for a picture that was deemed disrespectful towards Putin.

All of this, according to media researcher Vasily Gatov, fits into a clear pattern in which the Kremlin seeks to control public opinion by exerting leverage on the media companies it owns.

And if Kremlin cannot buy a media outlet, then it “creates the conditions that will bust it,” Gatov said.

A host of other Russian news outlets that are not owned by foreigners but still independent from Kremlin-friendly oligarchs have seen themselves targeted, chiefly on charges of “extremism.”

In March, the editor-in-chief of liberal leaning news website Lenta.ru was fired shortly after publishing a link to an interview with Ukrainian nationalist leader Dmitry Yarosh. Many of the outlet’s journalists subsequently left in protest over the decision, writing in a mass letter of resignation that “in the last several years the space for free journalism in Russia has dramatically diminished.” The staff has since launched a new site, Meduza, from offices in Riga.

Dozhd TV, a cable station often critical of the Kremlin, saw its advertising pulled after broadcasting a poll on whether the Soviet Union was right to defend Leningrad during World War II given the millions of Russian lives lost in the siege. Following a hastily put-together law that bans paid advertising on cable television starting in 2015, the slick cable channel now looks to have few options left.

The increasing pressure piled on independent media within Russia is coupled with a forceful campaign to bring Kremlin-funded news to viewers and internet users worldwide.

Putin suggested the logic of the move in a recent speech at a meeting of the Valdai club, in which he heaped criticism on the U.S.’s stance on the Ukraine crisis and its dominant role in the post-Cold War world: “Total control of the global mass media has made it possible, when desired, to portray white as black and black as white.”

But according to Robert Ortung, assistant director of the Institute for European, Russian, and Eurasian Studies at the Elliot School of International Affairs at George Washington University, the Kremlin's aims may be more cynical than correcting what is, in its view, a skewed media landscape.

By “eliminating the discussion of all possible alternatives” to the government line, the Kremlin can thus ensure most Russians’ passivity, Ortung said.