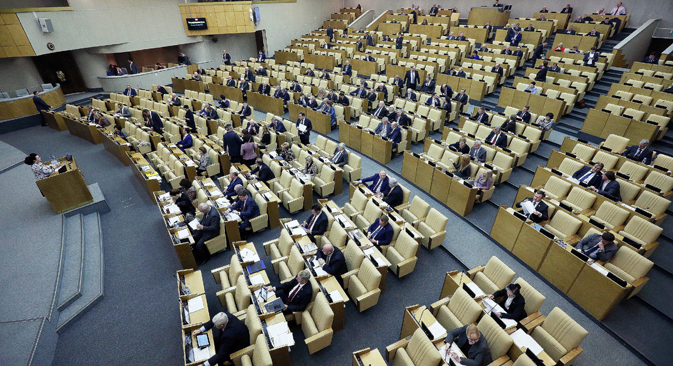 The law will allow the government to practically ban any organization, including a private commercial company. Source: Sergey Fedeichev / TASS

A bill that has passed its first reading the Russian State Duma would give the government the right to fine or ban foreign organizations it deems a security threat.

The bill specifies that the ban will apply to those who, according to the government, present a "threat to the defensibility and security of the country or to its social order or to the health of the population."

Such organizations can be subjected to administrative fines or face criminal penalties. They can also be asked to leave the country. The Prosecutor-General’s office, the ForeignMinistry and the FSB will decide which organizations are “harmful” to the country.  According to some Duma deputies, the law can be applied not only to NGOs, but also to international companies and transnational corporations.

One of the initiative's authors, Anton Ischenko, a State Duma deputy from the Liberal-Democratic Party of Russia (LDPR), said that the bill was a preemptive measure. "For now perhaps there is no need for the ban, but in the near future a time may come when the country will need to take extraordinary measures," Ischenko said.

He stressed that one of the bill’s objectives is to strengthen the capacities of Russian law enforcement agencies. According to Ischenko, the crisis in Ukraine and the recent events in France confirm that the Russian government must have the capacity "to prevent the country's destabilization."

At the same time, Ischenko says that there will not by any list of concrete criteria to determine if an organization is “harmful.” "We did not even try to create it because such a list can become too extensive. What the bill talks about is already regulated by legislation," Ischenko said.

Ischenko also believes that there is no need for a judicial procedure to determine if an organization should be fined or banned, since the three organizations responsible for carrying out the law – the prosecutor-general’s office, the FSB and ForeignMinistry – will provide their own “triple key” system of checks and balances.

"There are three agencies here that are the pillars of our stability for what concerns following the law," said Ischenko. "Professionals working in these agencies will be able to understand which organizations are dangerous for our values and for our country."

The law will allow the government to practically ban any organization, including a private commercial company. However, Alexander Kalinin, president of the Opora Rossiyi Association of Small-and Medium-Sized Enterprises, does not see any reason for concern at the moment. "I am 100 percent sure that the law is not aimed at private business. On the contrary, businesses are now running after investors."

Denis Primakov, the head lawyer of the Russian branch of Transparency International believes that the "absurd" bill is most likely another attempt to get rid of NGOs that Russia’s government finds objectionable. According to him, the bill is likely to affect organizations such as Open Russia, established by former YUKOS president Mikhail Khodorkovsky, or media holdings that have foreign beneficiaries.

However, Yury Nikolaev of the law firm Nikolaev and Partners thinks that the Russian government is doing what any other country’s government would do if it believed that some organizations were threatening its sovereignty. "A country has the right to create any form of regulation on its territory that would stop the activity of such organizations," said Nikolaev. "This is normal, everyone does it. We do not insist that other countries carry out our demands, like, by the way, some nations try to do."