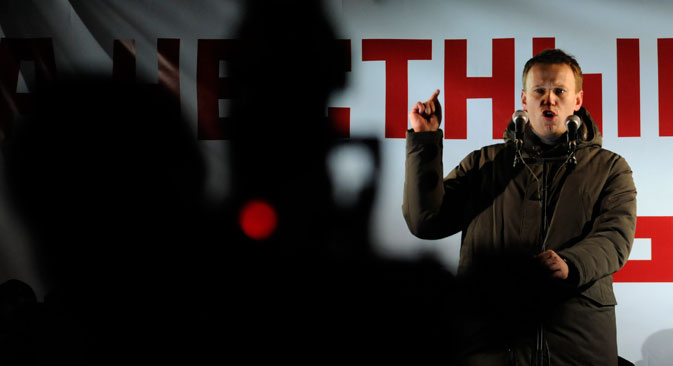 Opposition figurehead Alexei Navalny addresses an opposition protest on March 4, 2012 at Pushkin Square against alleged fraud in the presidential election. This year he will be unable to join an anti-crisis march in Moscow on March 1. Source: ITAR-TASS / Sergei Karpov

Russia’s opposition figurehead, political activist Alexei Navalny, will be unable to join an anti-crisis march in Moscow on March 1 after a court jailed him for 15 days. Besides political demands, the protesters are calling on the Kremlin to revise some of its economic decisions. However, observers say the current economic woes are not yet compelling enough to bring people out onto the streets.

An anti-crisis march in Moscow scheduled for March 1 will take place without Alexei Navalny, after the opposition figurehead and anti-corruption campaigner was sentenced to 15 days in prison on Feb. 19 for "a repeat violation of the procedure for holding assemblies, rallies, demonstrations and processions," reported Russian news agency Interfax.

Navalny was detained in the Moscow metro on Feb. 15 as he handed out leaflets to publicize the upcoming demonstration, dubbed ‘Spring.’

“The idea behind the march is simple,” Navalny, who chairs the Progress Party, had earlier written on his website. “The people sitting in the Kremlin haven’t been able to manage and won’t be able to manage. They had 15 years and $3 trillion from sales of natural resources.”

Now that “time has run out and the money has been eaten away,” and now that “the downgrade of Russia's [credit] rating to junk has taken the country back to 2005,” the leader of Russia’s fragmented opposition movement is calling on Muscovites to attend the anti-crisis protest.

‘We support Russia's policy and we are willing to be patient’

According to Mikhail Vinogradov, president of the St. Petersburg Policy Foundation, the economic agenda is gradually beginning to supplant the problems the opposition is accustomed to discussing. Rising inflation and an uncertain future are distracting society from the internal political struggle, so the opposition is trying to improvise, says Vinogradov.

Navalny to fight for political rights through street protests

Entrepreneur Alexei Gisak: ‘You have to work much harder now’

“If they are successful, they will unite both politically and socially disaffected citizens,” he explains, adding that last year’s mayoral elections, in which the opposition leader took 27 percent of the vote, putting him in second place, mean Navalny has not been rejected by Russians as a political figure.

Discomfort with Russia’s economic turbulence has not yet reached a point where ordinary citizens are ready to take to the streets, says Olga Kryshtanovskaya, a senior research fellow on socio-political processes at the Institute of Sociology at the Russian Academy of Sciences.

“There are economic reasons for a protest, but people aren’t complaining,” says Kryshtanovskaya. “They are saying, ‘We support Russia’s policy, and we are willing to be patient; we haven’t suffered that much yet.’ Desperation may come later, if and when state-owned companies go bankrupt and if there is a sharp increase in unemployment,” she continues.

However, Kryshtanovskaya claims that Navalny’s recent conviction for fraud (Navalny was handed a suspended sentence of three and a half years in a case widely seen to have been based on trumped-up charges) has undermined his reputation. “In order to expand a support base, the supporters need to trust their leader. How can they trust him if he was under investigation and convicted?”

The crisis as an excuse

Among the opposition’s socio-economic demands are the cancelation of the counter-sanctions against Western food imports, the reduction of “bloated military and political spending,” and reversing “the decision to confiscate people’s pension savings” [a reference to the government’s decision to freeze the portion of pension contributions allocated for investment for the last two years - RBTH]

However, unlike its political demands, the opposition’s economic requests are extremely vague, says Alexander Pozhalov, research director at the Institute for Socio-Economic and Political Studies, which is close to the Kremlin.

Many people are worried by rising prices, “but a cancelation of the counter-sanctions won’t influence the situation. Even if we start importing food again, prices still won’t go back to where they were,” he says.

Nonetheless, the opposition is trying to create a broad coalition of support around the protest, with representatives of liberal parties with differing ideologies figuring among its organizers. On his website, Navalny himself has urged everyone who shares the demands of the anti-crisis march to participate.

However, according to the sources interviewed by RBTH, a consolidation is unlikely and only possible if an overall sense of negativity comes to the fore. In that case, “the participants in the protest might forget about their differences,” Vinogradov said. But that won’t happen if Russia does not see another sharp decline in its economic circumstances before March 1, he added.