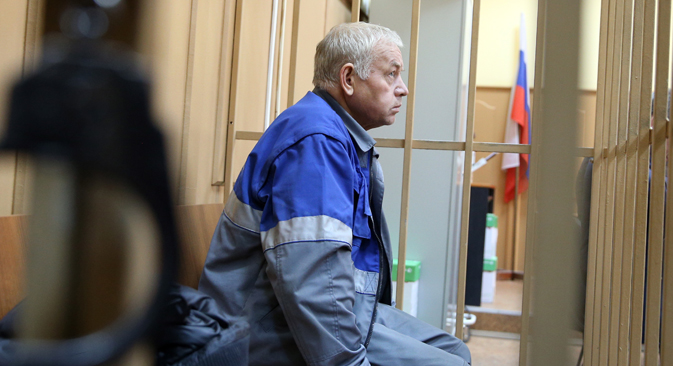 A technical commission has established the preliminary causes of the crash of a French Falcon 50 airplane at Moscow’s Vnukovo Airport in October 2014 in which Total CEO Christophe de Margerie was killed. The report outlines a number of procedural violations that took place in the run-up to the disaster, in which the Frenchman’s jet collided with a snowplow operated by an apparently intoxicated driver.

A technical commission has established the preliminary causes of the crash of a French Falcon 50 airplane at Moscow’s Vnukovo Airport last fall in which Total CEO Christophe de Margerie died after his jet collided with a snowplow during take-off.

According to the report by an avaiation subcommission, the events that led to the crash began to develop even before de Margerie embarked on the Falcon on October 20, 2014.

While the crew were waiting for their only passenger, three snowplows – accompanied by Vladimir Ledenyov, chief engineer of Vnukovo’s airport service – arrived for duty at the airfield.

According to regulations, the snowplow drivers were obligated to pass a medical examination before going out onto the airfield. Normally a doctor checks their heart rate and blood pressure, but on this occasion the procedure was canceled due to the concern that the tests could lead to delays in departures.

It is possible, according to the report, that Ledenyov and the operator of one of the snowplows, Vladimir Martynenko, were already intoxicated at the time.

The experts established that by 7 p.m. intensive traffic was moving in the vicinity of the so-called central crossing, where the airport's runways intersect.

In addition to the two snowplows and their escort truck, the traffic included a GAZelle van being driven by electricians, a tow tractor, which had pulled the Falcon onto the runway, and a construction workers' vehicle.

The drivers of these vehicles were in constant communication with air traffic controllers in order to obtain permission to cross one of the two runways. The driver of the GAZelle was the last of the vehicles to cross. However, at this point the snowplow operated by Martynenko suddenly followed the van onto the runway.

According to experts, the experienced driver "lost his spatial orientation."

It is most likely that Martynenko, who was apparently intoxicated, took the taillights of the GAZelle for the parking lights of the snowplow that he was to follow.

When he entered the crossing and suspected a mistake, the driver became confused and began performing "acts contrary to all logic" – he stopped, moved backwards, tried to turn around.

"I thought I could find and catch up with my colleagues, because I know the airport well," Martynenko said during questioning after the incident.

Throughout this time engineer Ledenyov had made no effort to find the lost snowplow or report the incident to the air traffic controller.

The crew of the Falcon, which had received permission to take off from air traffic controller trainee Svetlana Krivsun, commenced a take-off run on the runway. "What’s this car crossing the runway?" one of the pilots reportedly asked a colleague in the cockpit on seeing the snowplow, but by then it was too late to abort the take-off since the pilots had already passed the so-called point of no return.

As a result, the jet clipped the upper part of the snowplow with its right-side landing gear, spun and crashed on the airfield. Due to the bounce and resulting fire, the three crew members of the aircraft and the sole passenger were killed.

Air traffic controller Krivsun explained that she had given permission to take off only after she had surveyed the runway from the tower and checked the airfield surveillance equipment. According to the commission, an obstacle in the form of a snowplow appeared suddenly on the "crossing" and she was unable to see the maneuvers of the vehicle clearly.

However, Krivsun has still found herself among the accused. Apart from her, charges were also brought against her supervisor, Alexander Kruglov, and flight director Roman Dunayev, as well as Ledenyov and Martynenko. According to investigators, the air traffic controllers violated a number of regulations.

The defendants’ legal representatives later told the Kommersant business daily that they believe the experts’ conclusions merely demonstrate the innocence of the air traffic controllers.

However, the technical commission’s findings represent only the preliminary results of the investigation, which apparently will form the basis of the Interstate Aviation Committee's final report on the causes of the catastrophe.

The officers of the Investigative Committee will pay close attention to the experts’ conclusions when they press the final charges in the case.

RBTH tries to catch the most important Russia-related quotes of this week.