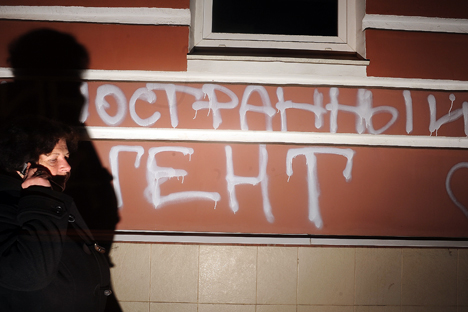 The building housing the Memorial human rights center on Maly Karetny Pereyulok in Moscow, where someone painted the inscription "Foreign agent" on the facade. Source: ITAR-TASS/Sergei Karpov

Non-governmental organizations that were forced to register as “foreign agents” under controversial legislation will soon be able to lift that status – but only if they meet certain conditions that some NGOs say are unrealistic. Meanwhile, the Constitutional Court has taken action to free NGOs from unscheduled inspections from the Prosecutor’s Office.

The State Duma is amending its legislation on non-governmental organizations, following widespread criticism of the current law, which obligates NGOs that receive funding from abroad to register under the politically sensitive designation of “foreign agent” – yet does not permit them to remove themselves from this list.

On Feb. 27, during the third and final reading, deputies accepted a bill introducing the procedure for NGOs to remove themselves from the register of "foreign agents," a list of organizations that receive at least part of their funding from abroad. The bill is now awaiting ratification by the Federation Council.

The Duma notes that the bill has been developed together with public participation (the current legislation has been widely criticized by mass media and NGOs) and is a compromise between NGOs registered as "foreign agents" and the government.

The Civic Chamber of the Russian Federation believes that the decision to remove the NGOs from the register should be made as soon as possible (not in the course of three months, but in 40 days), while the NGOs in this case are obliged to return all the money they received from the foreign sponsors (not only the money that was not used).

According to the current law on "foreign agents," a non-governmental organization is one that carries out political activity in Russia and receives financing from abroad. But while the conditions for being included in the register are known, the law still does not explain the procedure by which an organization can remove itself from the list.

Debate on NGOs as foreign agents continues in Russia

In the end, "agents" that have declined foreign funding can neither leave the register nor receive state grants. Therefore NGOs are welcoming the legislators' initiative to finally create a procedure on how to leave the register.

Under the new legislation, in order to be granted an exception from the list of foreign agents, an NGO should submit a corresponding statement to the authorized federal executive authority, in this case the Ministry of Justice.

"This removes the obvious mistake: Organizations could be placed on the list, but could not leave it," says President of the Memorial Civic Rights Organization Alexander Cherkasov. "But which money is required to be returned? Non-governmental organizations do not earn money. If it has already been spent on a project, where can the money be found?"

According to Civic Chamber member Iosif Diskin, the requirement to return the entire amount eliminates the possibilities of misuse, otherwise "they will spend $999,000, return $1,000 and leave the register, which is dishonest. If they wish to leave, they must return everything, or remain as foreign agents for another year."

According to Cherkasov, the problem with the new legislation is that in their version of the amendments the Civic Chamber members "did not say the most important thing": “The law (on foreign agents) is not subject to implementation because at its heart it contains misleading concepts."

View the infographic: What does the term "foreign agent" mean to Russians?

According to Yaroslav Nilov, President of the Duma Committee on Social Cohesion and Religious Organizations, the Duma will not clarify the concept of "political activity" in the law's amendments. For now the Duma states that for an NGO to leave the register it must not receive money or property from foreign sources and/or not carry out any political activities.

Court rules in favour of NGOs over inspection

Another problem with the existing legislation, according to civil rights defenders, was that the prosecutor’s office could inspect everything it wanted and whenever it wanted, without prior warning of the inspection or communicating the aim of the visit.

However, after several NGOs united and made claims, the Constitutional Court ruled on Feb. 19 that such inspections were unconstitutional, meaning prosecutors are now no longer allowed to demand that the organization provide them with documents that other state organs or other open sources already possess, as well as documents that do not concern the objective of the inspection.

The Constitutional Court's decision does not only regard NGOs. It includes all non-governmental organizations, such as religious institutions that receive funding from abroad.

"This is a very useful decision," said Yaroslav Sivulsky, representative of the Jehovah's Witness of Russia Administrative Center. "We had also filed a similar lawsuit against the prosecutor’s office and we partly won the case.

“The prosecutor’s office had carried out frequent, groundless inspections that just obstructed regular activity. I don't know who initiates these inspections but usually religious organizations are harmless. They exist on donations and do not carry out any kind of political activity. What is there to inspect?"

Read more: Media, education the next victims in the U.S.-Russian political face-off