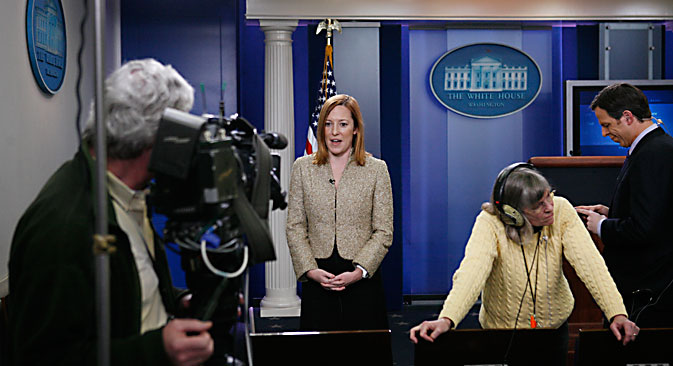 Putin’s press secretary responds to comments by Jen Psaki and Federica Mogherini on the status of the peninsula.

Russian President Vladimir Putin’s press secretary, Dmitry Peskov, has responded to comments by foreign officials about Crimea by saying that any situation worth discussing regarding the peninsula is a Russian domestic issue and not the business of other countries.

"There is no occupation of Crimea. Crimea is a region of the Russian Federation," Peskov told reporters on Tuesday, commenting on remarks made by U.S. Department of State Spokeswoman Jen Psaki.

Foreign countries have no right to discuss the situation in Russian regions, Peskov said.

On March 16, Psaki said that Washington would maintain economic sanctions related to Crimea “as long as the occupation continues.”

“The Russian Federation attempted to annex sovereign Ukrainian territory, disrupting 70 years of international order and drawing the condemnation of free, democratic societies across the globe,” Psaki said in a report posted on the official website of the U.S. Department of State. “The United States continues to support Ukraine’s sovereignty, territorial integrity, and right to self-determination.”

EU foreign policy chief Federica Mogherini also said the 28-nation bloc would stick to its policy of not recognizing the annexation, including through sanctions.

Commenting on Psaki’s statements to Russian news site Snob.ru, Viktor Supyan, deputy director of the Institute for US and Canada Studies of the Russian Academy of Sciences said: “The American and European sanctions towards Russia are synchronized, but the Americans have a more rigid position compared with the EU. After all, European economic sanctions have some bite as Europe has closer economic relations with our country.

“For the U.S., trade with Russia has a little meaning; Russia accounts for only 1 percent of U.S. trade turnover, so the States can prolong sanctions as long as necessary.”

The point of no return?

Russian President Vladimir Putin commented extensively on the circumstances surrounding the absorption of Crimea by Russia in a documentary entitled “Crimea: Return to the Motherland,” which aired on state TV channel Rossiya 1 on March 15.

Putin said that the idea of taking Crimea away from Ukraine did not develop until after Yanukovich was ousted.

“We never thought of separating Crimea from Ukraine, never. But when the developments related to the coup, the armed and unconstitutional seizure of power began, and these people found themselves in danger of being humiliated by nationalists, then of course we, I immediately thought of that,” Putin said.

According to the Russian State Duma Speaker Sergei Naryshkin, "Crimea was essentially separated from Russia illegally and against the people's will in 1991, and its return home took place in accordance with the will of the people of Crimea and in full accordance with the norms of national and international law.”

Naryshkin made his comments while opening a plenary session of the State Duma on March 17, the one-year anniversary of the day the Supreme Council of Crimea declared independence from Ukraine and asked to join Russia.

The declaration followed a referendum held on the status of Crimea on March 16, 2014, in which more than 95 percent of voters opted to join Russia. The referendum is regarded as illegal by most countries, including the entire EU and the United States because it was held on very short notice and while Russian soldiers were on the territory of Crimea, among other reasons. There are also many questions about the size of the turnout and legal status of those voting. The OSCE did not monitor the referendum, although observers from 23 countries invited by Russia did oversee the voting.

Russian Defense Minister Sergei Shoigu, speaking at the National Defense Center during a TV linkup between Moscow and Sevastopol, home of Russia’s Black Sea Fleet, called the absorption of Crimea by Russia “an act of restoring historical justice.”

"There was a brief, although complicated and bitter interval, when Crimea was outside our country - legally, perhaps, but not spiritually," Shoigu said.

Russia's parliament approved the request of Crimea to join Russia on March 21. Moscow has said repeatedly it will not return Crimea to Ukraine.

Viktor Supyan does not find the situation completely hopeless, despite the rhetoric.

“The U.S. is unlikely to soften its position concerning the Crimea, at least, in the nearest future,” Supyan said. “But I assume that America can be softened if the conflict in the Donbass stops. Then we can repeat in some ways the situation with the Baltic States after the war. The U.S. and Western Europe considered the three Baltic countries occupied by the Soviet Union as of 1940. Trade and political relations developed, but the conflict was frozen.

View from Crimea: Residents speak out on the switch from Ukraine to Russia>>>

What do local people think about their lives at present and in the future?