Lenin lives, but EU foods are dead in Russia 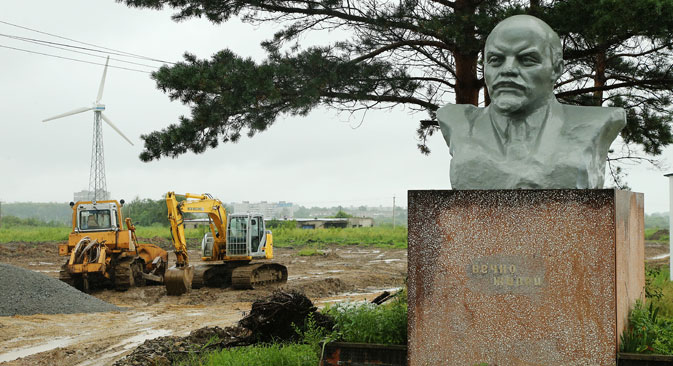 Last week saw the theatrical destruction of banned EU food, the re-birth of #LeninLives hashtag, and the appointment of an Orthodox priest over a UNESCO world heritage site in Russia.

Heavy-duty bulldozers and excavators were employed in a widely televised act of destruction of hundreds of tons of suspected European food - cheese, meat and fruit. The decree signed by president Vladimir Putin was a brutal though telegenic way of enforcing an embargo on Western food imports introduced last year.

Responses to the act of the biggest deliberate food waste the world has yet seen were varied. Simon Hewitt, a prominent art critic and Russian Art expert posted an ironic comment in his blog suggesting Putin was celebrating the 41st anniversary of Bulldozer Exhibition - when the KGB destroyed an unofficial dissident open-air art show in Moscow in 1974.

”In a bravura example of Performance Art yesterday, Russia bulldozed 650 tons of confiscated cheese and meat in homage to the KGB's brave 1974 dismantling of the seditious Bulldozer Exhibition at Belyaevo”, Hewitt satirised.

1974 or 2015, Lenin lives – this slogan has been around since dedushka (grandfather) Lenin died in 1924 and is getting a new spin these days thanks to social media. Russia's communist youth organisation has launched a competition encouraging young people to share photographs of themselves with statues of the former leader, reports the Guardian. In fact, the Lenin selfie initiative has been in action for the past six months - it was launched on 21 January this year to commemorate the death of Ilyich but received a new momentum last week after activists from the northern republic of Komi appealed to communist party of Russia leader Gennady Zyuganov. The activists stressed the competition would help to popularise the image of the leader of the world’s proletariat and shed light on the state of the Lenin statues scattered across the country, many destroyed or removed in the 90s.

Lenin, born Vladimir Ilyich Ulyanov, lives on, yet his political powers are rather limited these days even in his hometown of Ulyanovsk. According to Russian newspaper reports, a man named Vladimir Ilyich Ulyanov was prevented from participating in local parliamentary elections in Ulyanovsk – despite the affiliation to the leader of the world’s workers’ revolution that his name suggests. The candidate from the local communist party simply did not collect enough signatures to allow him to participate in the elections. The unemployed 38-year old submitted 96 signatures, 44 of which proved to be faked when checked by the authorities, explains Kommersant.

Lenin lives in the hearts of Russian people, particularly those who grew up in the Soviet Union, however some of the ideologies have turned around 180 degrees, particularly when it comes to religious sentiments and practices – which were banned in communist times. Lenin for example would hardly approve of the appointment of an Orthodox priest to run an important archaeological site, such as Tauric Chersonesos in Sevastopol that became the centre of media due to the appointment of priest Sergy Khalyuta to run the national preserve. Neither did Putin: the president ordered the site put on a list of national cultural heritage and transferred to federal control from Sept. 1.

Sevastopol’s new governor, Sergey Menyailo, appointed the cleric director of the archaeological site as there was a need to develop the site’s religious function, explains the Guardian, however the decision was met with indignation and concerns that the appointment might present a threat to the educational and archeological work at the UNESCO world heritage site.

The church distanced itself from the appointment, with a spokesman for Russian Orthodox Patriarch Kirill saying it was a decision for local authorities. Khalyuta said it was a “heavy cross” for him to bear.

What the Guardian article does not go into is that the story of the priest’s appointment is merely a part of an ongoing battle between corrupt local authorities (state and religious) and the opposition. In a report called The Battle of Sevastopol, RBK reveals how the state authorities headed by Moscow-appointed governor Menyailo, Orthodox church priests, and bikers who promise to build a military patriotic park, are struggling to divide the lucrative site between them, each aiming for the bigger slice of the cake in the newly-Russian Crimea.