Battle for control of the Arctic 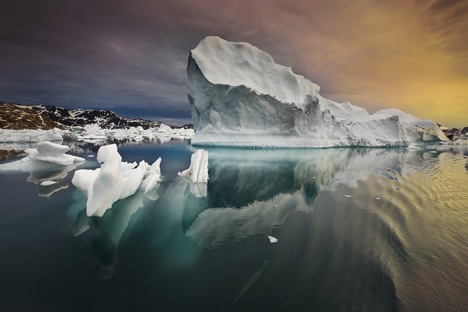 The Arctic shelf is believed to hold approximately 30 percent of the world's undiscovered natural gas and 15 percent of its oil, with the majority of these resources remaining offshore. Source: Sergey Anisimov/courtesy MAMM

Research in Russia supports Moscow’s territorial claims in the region. Russian scientists say their new model for the Arctic's tectonic evolution shows that the underwater Lomonosov and Mendeleev Ridges are part of the Eurasian mainland. This apparently substantiates Russia's claim to 1.2 million square kilometers of the Arctic sea shelf. At stake is control over vast natural resources, while opposition from western nations is a certainty.

Scientists from the Shirshov Oceanology Institute at the Russian Academy of Sciences have developed a new model for the Arctic's tectonic evolution that could help Russia, and several other countries, to support their territorial claims in the region.

The model claims that both the Mendeleev and the Lomonosov underwater ridges in the Arctic Ocean are, in fact, extensions of the Russian shelf, while the North Pole belongs to Denmark.

Russia submitted these claims over the vast Arctic area to the UN Commission on the Limits of the Continental Shelf earlier this month. If these claims are deemed valid, then access to significant parts of the Arctic region could be off-limits to other nations.

Scientists claim their model is the most accurate since it describes the actual tectonic plate movements in the Arctic and explains the origin of the basic tectonic structures of the seabed. These scientists say their model represents a huge step forward, paving the way to a completely new field of research; the study and reconstruction of mechanisms behind the movement of the Arctic’s crustal blocks.

The Russian scientific data could also supports shelf extension claims made by other countries, with some of them potentially extending their borders all the way to the North Pole. “Our colleagues from Norway, Canada, the United States and Denmark are quite interested in the model and are studying it with enthusiasm,” said Leopold Lobkovsky, deputy director of the Shirshov Institute.

“We know now that the Gakkel Ridge, which Russia had previously claimed, is not an extension of the country’s shelf, but merely a part of the seabed,'' said Yuri Sychev, head of the Zubkov State Institute of Oceanography. “The North Pole; according to the equi-distance principle; should belong to Denmark, but this issue is still a subject of discussion between Copenhagen, Ottawa and Moscow. As for the Lomonosov and the Mendeleev Ridges, these are undoubtedly part of the Russian shelf,” Sychev said.

The researchers have gathered unique cartographical and geophysical data that they expect will satisfy the UN commission. Russian scientific data shows that the ridges started moving away from the Eurasian continent 120 million years ago, but have never broken off from it.

A decade of research

Russia first submitted a similar territorial claim in 2001, but it was rejected because it failed to provide convincing evidence. Establishing the new model took over 10 years of geological and geophysical studies and large-scale marine expeditions involving ice-breakers and scientific research ships. During one such expedition, drilling rigs deployed near the Mendeleev Ridge reached rock formations that could date back almost 300 million years.

“At the moment, the Arctic Ocean beyond the exclusive economic zone is open to ships from all nations”, said Lobkovsky. “If the Russian claim is approved by the UN Commission, then a large part of the Arctic will no longer be considered international waters.''

Professor Vladimir Pavlenko, head of Russia’s Arctic Research Institute, believes the UN will approve Russia’s claims this time. “The rejection of the 2001 claim made sense; we had almost no accurate data at that point,'' said Pavlenko. ``It was hard to expect any other outcome, but now we have every reason to expect an approval.”

Despite the new evidence however, Russia's claim will continue to meet strong opposition from other countries like the USA and Canada, because at stake is a very resource-rich area of the Arctic.

The US House Foreign Affairs Committee Chairman Ed Royce said the U.S. and its allies should stand up to Russia. “Russia has been aggressively pushing its claims to the Arctic, especially the resource-rich continental shelf. It now has an Arctic Command to strengthen its military presence in the region. The U.S. and others bordering the Arctic must maintain a united front against Moscow’s aggressive ambitions toward this vital region,” said Royce.