Elections in Donbass: What they mean for the Ukrainian conflict 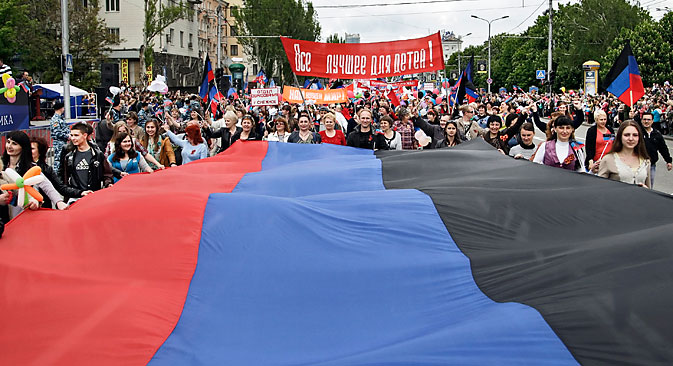 Local citizens carry a giant flag of the self-proclaimed Donetsk People's Republic during their march marking the first anniversary of the referendum in downtown Donetsk, May 11. Source: EPA

EPA
The decision by the Donetsk and Lugansk “people’s republics” in eastern Ukraine to hold local elections on dates that contravene the Minsk peace agreements is placing the whole future of the region in doubt, with experts saying that holding elections in the southeast could lead to a freezing of the conflict and the extension of sanctions against Russia.

Negotiations on the resolution of the 18-month-old conflict between government forces and pro-Russian rebels in eastern Ukraine, currently at a dead end, are to face their stiffest test yet in October – a test that threatens the very survival of the agreements signed in Minsk in February on a political settlement of the conflict.

The heads of the self-proclaimed republics in the south-east of Ukraine have issued decrees to hold local elections in territories under their control, regardless of the vote in the rest of Ukraine.

The problem is that the leaders of the breakaway Donetsk and Lugansk “people's republics” (DNR and LNR) in the Donbass region of eastern Ukraine have signed decrees to hold local elections on Nov. 1 and Oct. 18, respectively, while the rest of the country goes to the polls on Oct. 25.

The organization of elections in the rebel-held region is a key element of the Minsk agreements, which stipulate that elections in the Donbass must be held on the same day as those in Kiev and elsewhere in Ukraine.

However, while the elections must be held in accordance with Ukrainian legislation, the Minsk agreements also call for them to be held under the provisions of a special law on special status for the Donbass as part of the federalization of Ukraine. They also call for dialogue between Kiev and the breakaway regions, which so far has not happened.

Yet Kiev has proclaimed that the law on special status, which has already been approved by Ukrainian President Petro Poroshenko, will not come into force before the elections, as the Minsk agreements outline, but only after they are held. This categorically does not suit representatives of the DNR and LNR, which effectively have no place in Kiev's scenario.

The DNR and LNR, meanwhile, are claiming that the organization of the elections does not violate the Minsk ceasefire agreements.

According to Russian news daily RBK, they insist on the sequence of political steps reflected in the Minsk agreements – the authorization and adoption of a new electoral law by Kiev, the entry into force of the law on the special status of the Donbass, constitutional reform and amnesty.

This is the platform on which they are willing to discuss the possibility of a compromise – the holding of elections in such a way as to also meet the position of Kiev.

‘The foundation of the state’

Commenting on the decision of the heads of the self-proclaimed republics, Poroshenko called for strengthening sanctions against Russia, which officially denies providing the two republics with military support despite mounting evidence.

Poroshenko compared the upcoming vote to the elections of the heads of the republics on Nov. 2 last year, which he sees as the reason for last year's escalation of the fighting and the failure of the first Minsk agreements of September 2014.

Speaking about the importance of the elections, Alexander Zakharchenko, the head of the DNR, said that "they are important for the state in general."

"...With these elections, we conclude the construction phase of the state itself. This is the stone that we laid in the foundation, and now we will build the walls and roof. After holding the elections, we will show that we are an accomplished, self-sufficient state," said Zakharchenko, stressing that the elections will be fair and democratic, with the invitation of observers.

Despite the announcement of the election dates, experts believe that a compromise between the Donbass and Kiev on the issue is still possible. In their view, much depends on the upcoming meeting in Paris between the leaders of Russia, Germany, France and Ukraine, to be held on Oct. 2.

However, failure to make headway on the issue in recent negotiations does not bode well, and Russia could find itself facing further sanctions unless it can convince the leadership of the DNR and LNR to back down and follow the election procedure set out in the Minsk agreements.

According to Ukrainian political analyst Vadim Karasyov, director of the Ukrainian Institute of Global Strategies, a "hypothetical possibility to ensure that these elections are held under Ukrainian legislation" still remains. He also ties this to the meeting of Oct. 2.

Otherwise, he predicts a repeat of the "Transnistrian scenario" – a reference to the breakaway sliver of Moldova where, in the absence of a political solution between ethnic Russians and the authorities in the Moldovan capital Chisinau, an unrecognized state entity has existed de facto for more than 20 years.

"If the elections are held on their own, the Minsk agreements will be torn down, and the conflict will be frozen," said Karasyov.

"What does the failure of the Minsk agreements mean? It means the extension of economic sanctions [of the Western countries against Russia] in late January, Ukraine will not get back control of the border, while a notional border will be drawn along the line of contact. In general, everything will be modeled after Transnistria," he said.

According to Andrei Suzdaltsev, Deputy Dean of the Faculty of World Economy and International Affairs of the Higher School of Economics, the elections are the "subject of bargaining” given the importance of this issue for Kiev as well as claims that the vote could lead to new sanctions against Russia.

If agreement is not reached on the election, it could lead to a long-term freezing of the conflict as in Transnistria and, he claims, a withdrawal of troops.

However, even if this does not happen, a resumption of hostilities is unlikely, he said, as an "escalation of the conflict will cause great harm to both Ukraine and Russia." 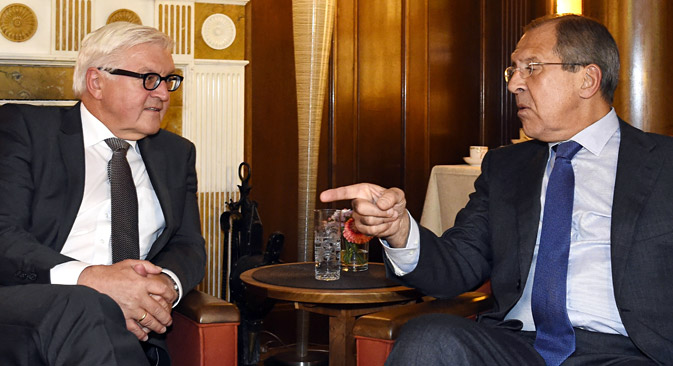 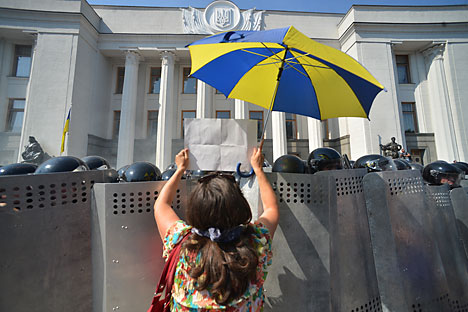