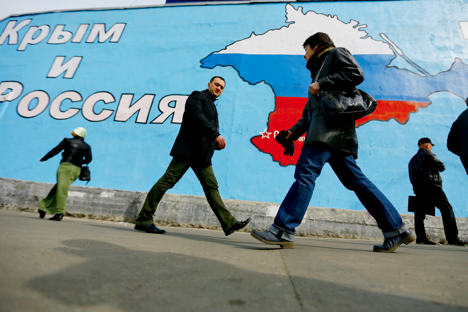 A mural showing the Crimean peninsula in Russian national colours on the wall of a building in Moscow's Taganskaya Square. The message reads: Crimea and Russia are united forever! March 31, 2014.

TASS / Zurab Dzhavakhadze
Crimea is Russian territory in full conformity with the expression of will of Crimea’s peoples, Russian ForMin Sergey Lavrov said.

Russia is in talks with no one on Crimea’s returning back to Ukraine as Crimea is a Russian territory, Russian Foreign Minister Sergey Lavrov said on Tuesday.

"There is nothing to return, we are in talks with no one on Crimea’s return. Crimea is Russian territory in full conformity with the expression of will of Crimea’s peoples," he said at a news conference dedicated to the results of 2015. "[It was the expression of will of] all of them, including those who had had no rights under the Ukrainian authorities and who had been granted their rights, including the state language, when Crime reunified with Russia after a referendum, the results of which are well-known."

"Of course, you can follow the logic of our Ukrainian colleagues who keep on saying they will recapture Donbas this year and get back Crimea next year but, as a matter of fact, it would be better to speak about the implementation of the Minsk agreements," Lavrov went on to say.

He drew attention to the fact that the Minsk agreements "envisage Donbas staying a part of Ukraine but with obligatory elements of decentralization." "And the Verkhovna Rada [Ukrainian parliament] is failing to do what was agreed by the president of Ukraine," he noted.

"And as for Crimea, probably it will be better not to judge the situation based on hearsay but to go there to see," the Russian foreign minister said, adding that many journalists and a number of European politician had already visited Crimea. "It’s better to see everything with your own eyes."

Despite the absolutely convincing results of the referendum, Ukraine, the United States and the European Union have been refusing to recognize Crimea as a part of Russia.