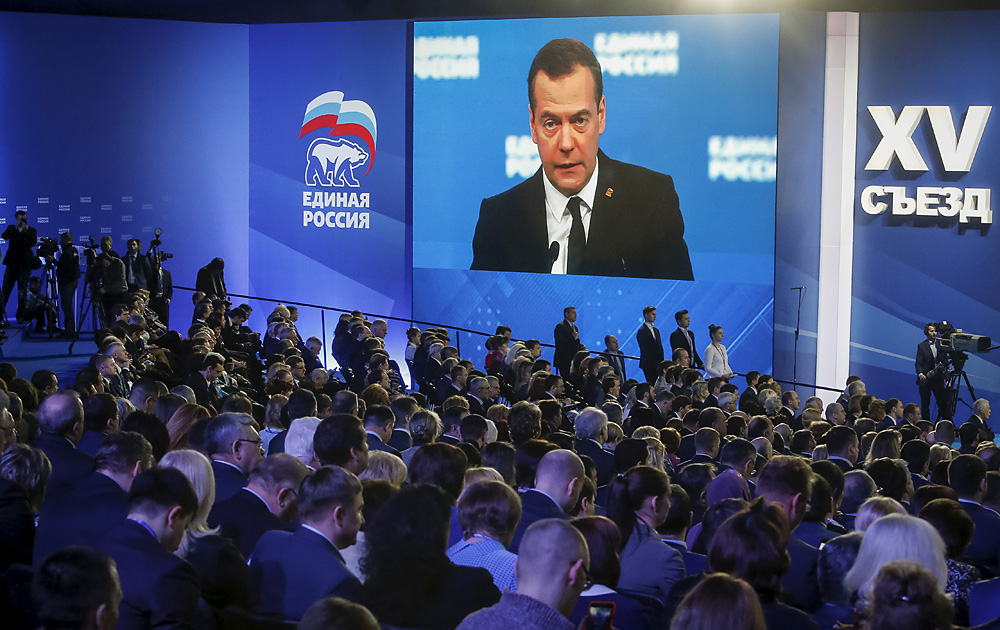 Russian Prime Minister Dmitry Medvedev is seen on a screen as he speaks at a United Russia party congress in Moscow, Russia, February 6, 2016

Reuters
Russia’s federal election campaign of 2011 was the least successful ever for the ruling United Russia Party, and saw its reputation tarnished by accusations of vote-rigging and fraud. How is the party preparing for the forthcoming elections in 2016, and can it repair its tainted image among Russian voters?

Russia’s ruling party United Russia; the party with the highest voter rating in Russia; is heading toward the forthcoming parliamentary elections in the backdrop of a downward economic trend for the first time. Elections are due in September 2016, but the party leadership is concerned about the results.

United Russia controls a majority in the State Duma and regional parliaments. The last elections to the State Duma, in 2011, found the party at a crossroads, with allegations of fraud, street protests after results were announced and a popular slogan describing United Russia as “the party of crooks and thieves," successfully promoted by the opposition, hurting its reputation.

The United Russia began a party congress on February 5 to look at the forthcoming elections. The main idea proclaimed at the congress was national solidarity. The country regained its strength not at a time when all was well with the economy, "but when we were in agreement," party chairman and Russian Prime Minister Dmitry Medvedev said.

A brand to unite regional elites

The image that United Russia created for itself, formed over several years and which later let the party down in the protest years of 2011 and 2012, was that it was seen by many as inseparable from the Kremlin.

Having emerged in 2001 from the merger of two political movements, Unity and Fatherland – All Russia, the United Russia was largely the party of regional elites. The electoral bloc Unity was created in 1999 under the banner of supporting then Prime Minister Vladimir Putin, and brought together a large number of regional heavyweights.

According to analysts, the brand "United Russia" was to bring the positions of different regional elite groups closer to the policy of the federal centre. At the same time, it did not imply unity in ideology.

"Historically, there are several ideological currents within the party [United Russia]. The party has patriotic (conservative) and social (centre-left) platforms. It is something like internal party factions," said Alexander Pozhalov, director of research at the Kremlin-linked Institute of Social and Economic and Political Studies (ISEPS), in an interview.

Given the extreme weakness of liberal parties in Russia over the past 15 years, United Russia also appealed to the centre-right wing of Russian politics. "This is the part of the middle class which emerged in the 2000s and considers itself supporters of the president," explained Pozhalov. 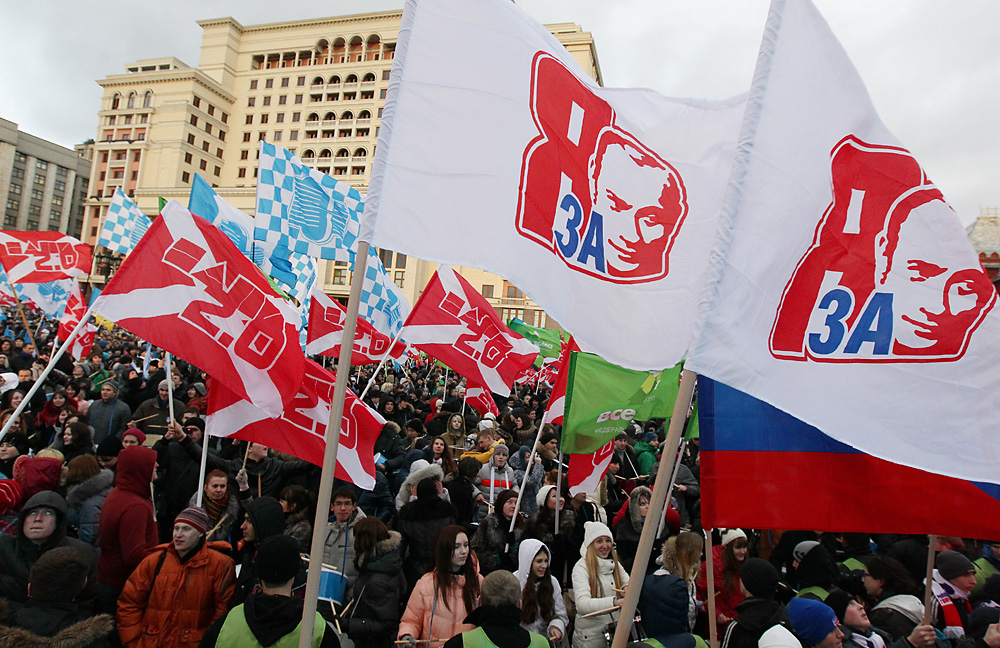 Activists of the youth movement Nashi (Ours) hold flags with portraits of Vladimir Putin celebrating the victory of the 'United Russia' in the parliamentary elections at a rally in the center of Moscow, Dec. 12, 2011. Source: EPA

In this sense, United Russia is hardly a typical party with a single ideological line. According to Dmitry Orlov, head of the Agency for Political and Economic Communications, it could be compared to the Liberal Democratic Party of Japan or the CDU/CSU party in Germany.

The fact that the vast majority of United Russia's lists in the regions were headed by governors or regional ministers over the years has meant that many have labelled it the party of bureaucrats, executives and officials; a tag that did it no favours when suspicions of electoral irregularities later sprang up.

However, the key to its success; its closeness to Russian President Vladimir Putin (who is no longer related to it legally after distancing himself from it in the wake of the 2011-2012 protests), and its administrative resources; means it has crucial advantages over its rivals.

In 2007, Putin led the federal list for parliamentary elections and United Russia won a record high of 64.3 percent and 315 of 450 seats.

The point is not in a majority

The party’s access to administrative resources and accusations of abusing those resources resulted in the situation where, during the controversial 2011 parliamentary campaign, United Russia (and by extension, the government, since the party wielded a two-thirds constitutional majority) was accused of vote-rigging, resulting in large-scale demonstrations in Moscow and other Russian cities.

The protest vote ("Vote for any party but United Russia") allowed the Communists and others in the parliamentary opposition to gain a substantial percentage. However, protest voting is unlikely during the 2016 campaign.

First, the current opposition in the Duma has been identified with a large number of prohibitive initiatives their deputies have put forward. The Communists, for example, have proposed banning organizations that help young Russians to find word abroad, and introducing exit visas for Russian citizens. 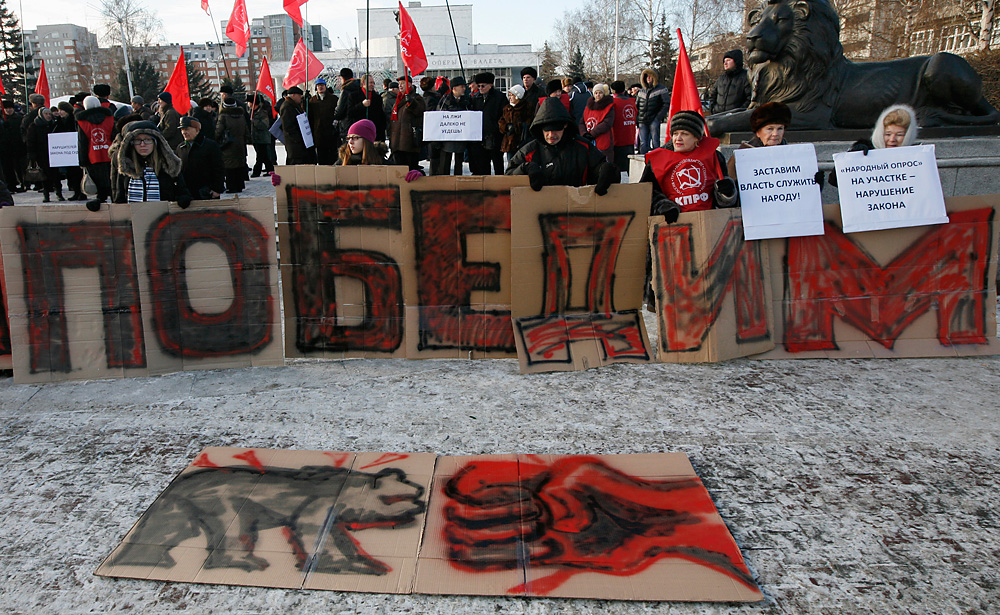 Supporters of Russian communist party hold a rally to protest against violations at the parliamentary elections in the center of Russia's Siberian city of Krasnoyarsk, Dec. 9, 2011. Source: Reuters

As a result, the difference between United Russia and its formal opponents has largely worn off in the minds of many voters, and studies record people saying "It's all the same party of power," said Yevgeny Minchenko, director of the Moscow-based International Institute for Political Expertise.

Secondly, none of the parliamentary opposition is, in reality, seeking to obtain a majority; they act in their electoral niches.

"In Russia today, there is a one-and-a-half party system," said Orlov. "There is the main ruling party, and the public support rating of the rest is below the ruling party."

The point of their political struggle is not in obtaining a majority, but in expanding their niche.

"Relatively speaking, Pepsi-Cola cannot defeat Coca-Cola. Having 20 percent of the market, it can win another one percent at best," said Orlov.

This is not to say that the parliament is fully devoid of opposition sentiment. The Communist Party, for example, has never voted for the budget.

"The budget determines the essence of the policy that will be carried out over the coming year. And the refusal to vote for it is the main criterion of the opposition in any political system," said Orlov.

It is unlikely that United Russia will resort to large-scale rigging in 2016; the result is important, but not crucial for the Kremlin during this campaign.

"What is essential is to preserve the current configuration: so that the parties which are within the patriotic consensus win the elections," said Yevgeny Minchenko.

In this respect, the open primaries (preliminary selection of party candidates among ordinary voters) at the federal level that United Russia will hold for the first time are a demonstration of openness instead of the backroom agreements that characterized former practice.

The February 5 United Russia congress also saw a decision being taken to replace almost a third of the members of the party’s supreme council. This is an attempt to replace the party's "heavyweights" with opinion shapers (doctors, actors, authors and philanthropists), which will effectively “reset” the ruling elite.

"This is a constructive process in United Russia's evolution," said Pozhalov of the ISEPS. "This will relieve it of its current image of the bureaucracy's party."

The popularity rating of United Russia is a reflection of the electorate’s confidence in the president, but Vladimir Putin has not seen the current socio-economic situation affect his own popularity. Around 82 percent of Russians declared themselves satisfied with Putin’s performance as president in a poll conducted on January 24.

"But you can take your irritation out on the ruling party," said Yekaterina Shulman, associate professor of the Institute of Social Sciences at the Russian Presidential Academy of National Economy and Public Administration. "And these are risks for the electoral campaign."

In this situation, the Kremlin needs independent or self-nominated candidates who will be supported by the All-Russia People's Front (a non-partisan public organization established by Putin in 2011). They are not associated with the ruling party, but are considered sufficiently loyal to form the necessary pro-government majority upon being elected to the State Duma.

At the same time, the party’s current rating is around 50 percent and, according to Orlov, United Russia has a chance to raise its representation in the Duma. 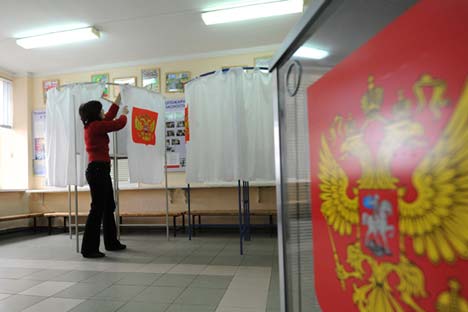