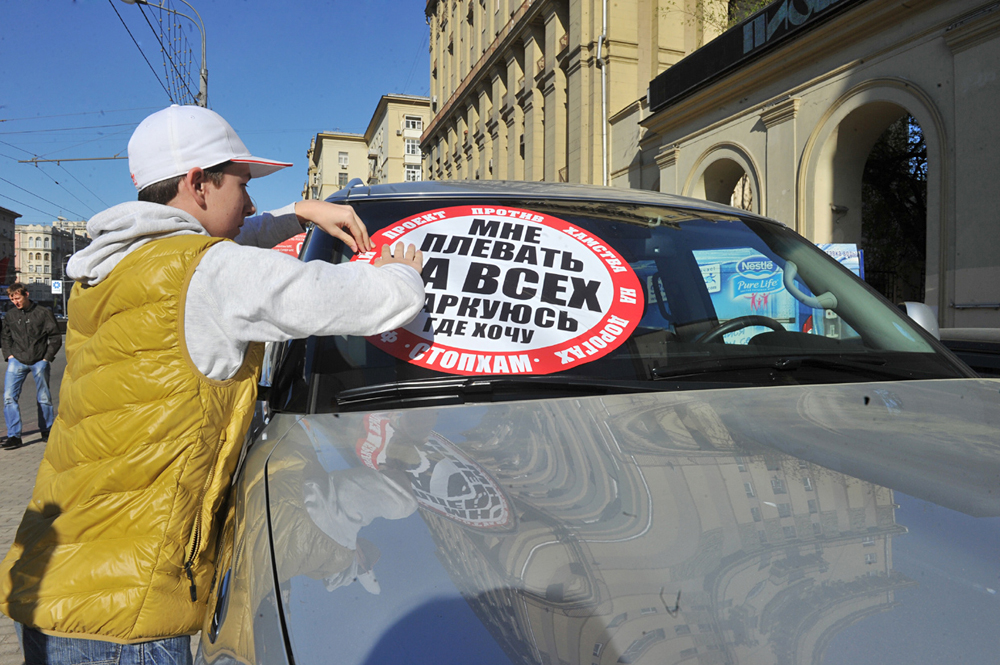 "I don't care about anyone, I park wherever I want." Source: PhotoXPress

A popular activist movement against drivers who think they are above the law, StopHam has been recently shut down by authorities who decided the organization had accomplished its stated mission. RIR reports on why the movement was founded, why it succeeded and why it was abolished.

A typical weekday evening: There is a traffic jam on a small street in the centre of Moscow. The reason: A white Mercedes is parked in front of a restaurant in the middle of the street, with its hazard lights on.

When the owner of the car, a young woman, emerges from the restaurant and approaches her car, she finds an enormous sticker on her windshield stating, "I don't care about anyone, I park wherever I want."

"What's this?" says the woman angrily, ripping off the sticker.

A group of young people from the StopHam activist movement approach her. One of them tells her: "Because of you there's a traffic jam. We've taken measures."

After an argument, which the activists record on video, the woman drives off. This time there was no physical violence. Often, furious drivers break the camera and beat up the activists.

Ordinary citizens are not, however, the main target of StopHam. The group name is based on the Russian word for “boor,” ham.

The traffic activists are accompanied by a video crew and all offences are recorded on camera. The most scandalous videos are then posted on their YouTube channel, where they receive a lot of public attention.

StopHam started as a protest and fight against the arbitrariness of high-ranking officials or the well-to-do part of Russian society, who behaved as if they owned the roads and the law did not exist for them, disrespecting parking and traffic regulations.

The police would not usually react to such violations and ordinary citizens were increasingly frustrated about such lawless situations. The StopHam public movement was effective in at least voicing the general public’s dissatisfaction, and also in creating difficulties and embarrassment for high-handed drivers who considered themselves above the law.

On March 30, the Moscow City Court announced liquidation of the movement. The court's press office said that in accordance with a demand from the Justice Ministry, the court had decided to wind up the ‘vigilante’ movement.

In the five years that StopHam has existed, the situation on Russian roads has changed significantly and the government has started doing its job better. Parking rules have been made stricter and the police have finally begun carrying out their functions.

In Moscow (and in other cities) hundreds of incorrectly parked cars are ticketed daily and towed to special parking lots, where the offender has to pay a fine to get the car back (together the fine and the special parking cost a steep $120). The green tow trucks that remove cars from the streets already have a nickname: “vultures.”

In fact, drivers these days are more afraid of the green “vultures” than of StopHam, which is why news of StopHam's exclusion from the list of government-subsidized organizations would mean that the authorities see its mission as having been accomplished.

The war against antisocial parking

"We carry out raids in Moscow every day," said StopHam director Dmitry Chugunov, explaining how the organization worked. "Usually we have 2-3 raids a day, but sometimes more."

The movement has its own network, covering between 30 and 50 Russian cities.

"People from various cities have turned to us. They say they want to open a StopHam branch. We are happy to help them," said Chugunov.

Yuri Geiko, editor-in-chief of the Avtolikbez car magazine, approves of StopHam's activity. "This is a correct movement. They do a lot of good. This says that elements of a civil society are sprouting in our country," said Geiko.

Chugunov is of the same opinion, and believes that the movement has achieved an important outcome: "Our project is gradually beginning to change the way people think," he said.

StopHam vs. the Main Directorate for Road Traffic Safety

StopHam also has numerous critics, who believe the movement exists on "protection from above" and for "self-promotion," for which the activists vigorously use YouTube resources.

YouTube also brings in some revenue. The SocialBlade revenue estimator calculated that the activists can earn $192,000 a year on their channel.

Representatives of Russia’s Main Directorate for Road Traffic Safety (GIBDD) do not have a particularly high opinion of the activities of the movement.

"We do not recognize the StopHam organization, they just get in the way," said Andrei Chervochkin, head of the GIBDD branch in Karelia, north of St. Petersburg.

"The most important thing for them is to make a video and show up the person. Yes, he violated the law and must be punished, but we have the judiciary and the rule of law. No one can judge him, neither I nor anyone else."

Several years ago the most vehement opponents of StopHam even created their own public movement called StopStopHam, which called for "ending the wrongful actions" of the StopHam activists.

The StopHam movement was established in 2010 as one of the federal programs of the Nashi pro-Kremlin Youth Movement. In July 2010 the project was presented at the Seliger forum and verbally approved by the then Interior Minister Rashid Nurgaliev.

The director of the movement is Dmitry Chugunov, who in the past was an active participant of the Nashi pro-Kremlin Youth Movement. He stopped working with Nashi in 2012. From that moment StopHam was formally independent.

The decision to liquidate the movement was not appealed. When RBTH asked Chugunov if StopHam will continue its activity, he replied "of course." For now he still has not explained how.