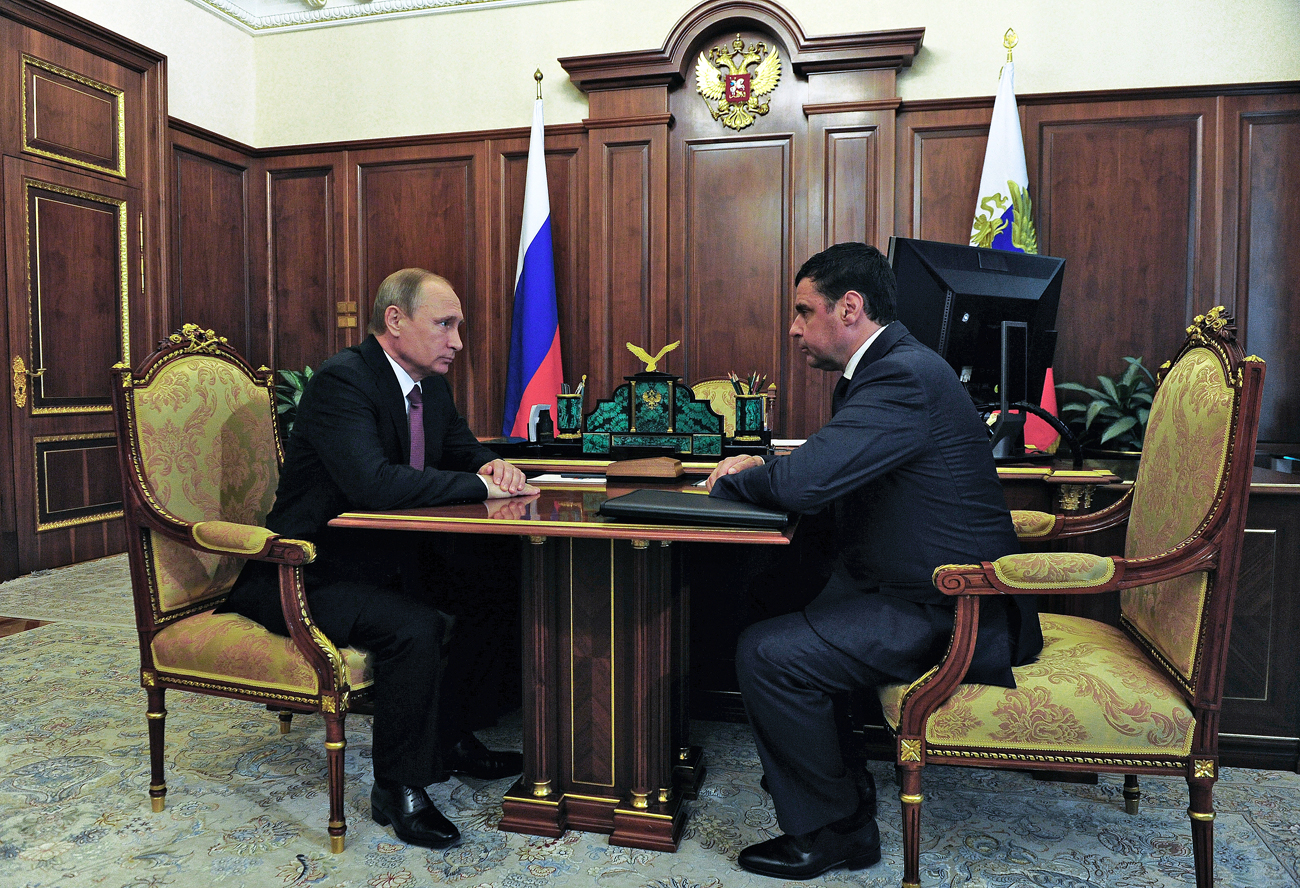 Russian President Vladimir Putin, left, and Deputy Minister of the Interior Dmitry Mironov meet at the Kremlin. Mironov has been appointed Acting Governor of the Yaroslavl Region.

Michael Klimentyev / RIA Novosti
A wave of dismissals, of senior officials, envoys and Governors, many on charges of corruption, shook the Russian administration last week. Security officials assumed many key positions in the large scale reshuffle.

Russian authorities were rocked last week by a wave of dismissals. Several envoys in federal districts, governors in the Federal districts and government officials were transferred or removed or changed, in one day.

Four governors, Sergey Menyailo of Sevastopol, Nikolay Tsukanov of Kaliningrad, Sergei Yastrebov of Yaroslavl and Nikita Belykh, Governor of Kirov accused of corruption, also lost their positions, "due to the loss of trust."

Mikhail Zurabov, the Russian Ambassador to Ukraine, was also removed from his position.

Belianinov, head of the FCS, is a witness in a high-profile criminal case of alcohol smuggling. Photographs of FSB officers searching his home was a central topic in the national media last week. Vladimir Bulavin, former presidential envoy to the Northwest Federal District (NWFD) was appointed in his place. He comes from the KGB and used to be deputy director of the FSB, chief of staff of the NAC and first deputy secretary of the Security Council.

Sergei Melikov, envoy to the North Caucasus Federal District, has been promoted to become deputy director of Rosgvardiya. According to a "Gazeta.Ru" source, this change was previously known and was interpreted to indicate the need to strengthen and balance the powers of Viktor Zolotov, the head of Rosgvardiya and former chief of the presidential security service.

Rosgvardiya was created this year as a "super agency" of security services, with people from internal troops, Special Police Squad, Rapid Response Police Squad, private security, and including aircraft parts and licensing and permit authority in the Ministry of Internal Affairs.

Two of the four dismissed governors; Menyailo from Sevastopol and Tsukanov from Kaliningrad; emerged winners from the reshuffle, becoming the President’s ambassadors; Menyailo in the Siberian District, and Tsukanov in the Northwestern Federal District. Only Yastrebov, ex-Governor of Yaroslavl, was left out. He was replaced by Dmitry Mironov, a former KGB and Federal Security Service officer. Former deputy Interior Minister Menyailo was replaced by Dmitry Ovsyannikov, deputy Minister of Industry and Trade. Tsukanov was replaced in Kaliningrad by Eugene Zinichev, chief of the regional FSB.

Rumours about Menyailo’s resignation as governor of Sevastopol started in April. The public conflict between Menyailo and the "people's mayor" Alexei Chalyi lasted almost a year and disturbed the federal government.

"This is an attempt to resolve the frontal conflict between Menyailo and Chalyi in Sevastopol: Belaventsev (presidential envoy in Crimea, who is now ambassador to the North Caucasus Federal District) was on Menyailo’s side, and now it will be irrelevant, since Crimea is now part of the SFD,” said political analyst Alexei Makarkin. “The conflict between Menyailo and Chalyi is not only one of a personal nature: it was a debate about the paradigm for further development of Crimea; either as the Ministry of Defence outpost in the south or as a modern innovation cluster," Makarkin said.

That the Crimean District has been merged with the South district is a good sign, say experts. "From a geopolitical point of view, Crimea has become part of continental Russia, and it is no longer possible to accept it as a single piece,” said Igor Ryabov. “Secondly, all the integration processes will move faster. And Crimea should fit into the strategy of the development of the south of Russia," he said.

Eyes on the security forces

The appointment of Mironov, former deputy head of the Interior Ministry, as Governor of the Yaroslavl region confirmed the trend of the appointment of the security forces in troubled regions. This pattern emerged when Alexei Dyumin, Deputy Defence Minister, became the head of the Tula region.

"People from the law enforcement agencies are closer to Putin, they are easier to contact for the federal government, and they better understand the concept of a hierarchy and the vertical of power. Civilian officers often express their discontent with the centre, trying to create their own patrimony. Promoting the role of the security forces officers is associated with the strengthening of the internal security, a new configuration of power is being prepared," said political analyst Nikolai Mironov.

Political analyst Stanislav Belkovsky is associating the appointment of security forces officers who are personally loyal to the president, with the Kremlin’s fears before a "palace coup".

Alexander Pozhalov, the Director of research close to the Kremlin ISEPI Fund, believes that the reshuffle package was accumulating. "There was an accumulated potential of urgent staffing decisions that led to the other personnel decisions. Our president makes package decisions, not just looking at certain personalities, but also taking into account the increase of efficiency of the management vertical," he said.

However, Makarkin believes that the changes are related to very serious processes in the power elite.

"The rearrangement is associated with the FSO and the FSB: the people of the FSO, who have worked in other federal departments, are leaving for the regions, like Mironov and like Dyumin before him. And Melikov is being transferred to Zolotov from SKFO. This appointment was expected for a long time, there is another powerful general in Rosgvardiya, but not Zolotov’s contender. Representatives of the FSO and the FSB receive representation in other power structures, which leads to a strengthening of the "wing" power. Nikolai Patrushev is one of the main winners: it was his protégé in the Security Council Bulavin who was appointed as the head of the Federal Customs Service," Makarkin explained.

This would indicate a trend to strengthen the FSB and FSO. Earlier, Viktor Ivanov’s Federal Drug Control Service became the "loser" among the law enforcement agencies, and the recent arrests of high-ranking leaders of the Investigative Committee revealed that this agency lags behind the FSB in terms of staffing points. The recent reshuffles have further increased this imbalance.