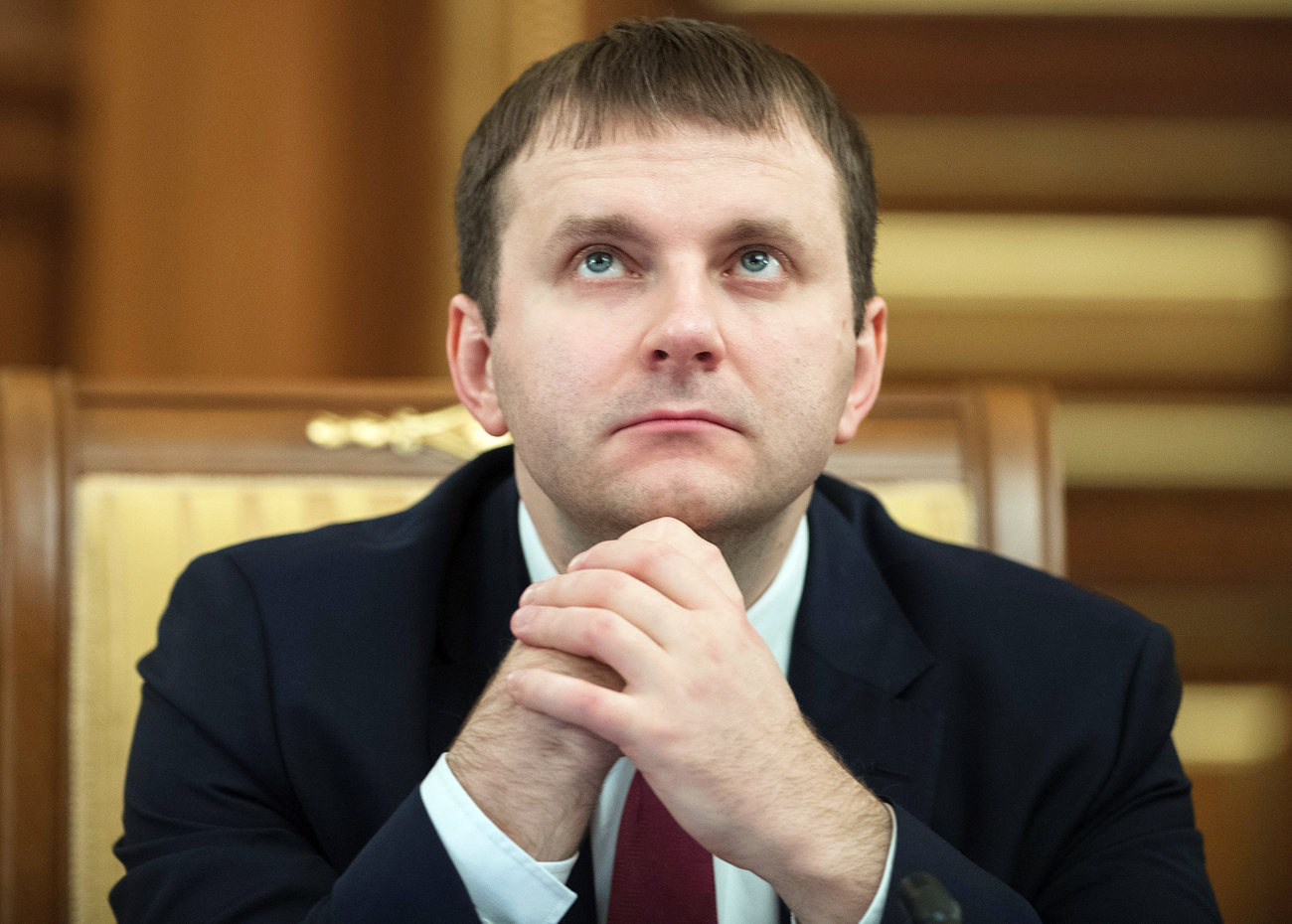 Economic Development Minister Maksim Oreshkin at a meeting of the Cabinet in the Government house.

The appointment of Maxim Oreshkin, former department head in the Ministry of Finance, to replace Alexey Ulyukayev could transform the Economic Development Ministry into a copy of the former. The two government agencies, earlier opposing each other, will now follow one line. This means the government will find it easier to implement planned measures like tax reform, tight monetary policy and the weaker ruble in coming years to replenish the state budget.

After the scandalous firing of Alexey Ulyukayev, who was accused of extorting bribes from state company Rosneft, a variety of rumors surrounded the candidacy of the new minister. Some saw this step as a change of course, and a 180-degree reversal of economic policy. Some even considered that Sergey Glazyev, “an apologist of the printing press”, was a potential candidate. However, this government agency will now be headed by a proponent of the market economy, not a proponent of strong central government control.

What is known about the Economic Development Minister Maxim Oreshkin

“He is even too much oriented towards the free market,” says RuslanGrinberg, Director of the Institute of Economics at the Russian Academy of Sciences. “He is quite young, and was brought up in an atmosphere of adoration of free market self-regulating forces. At the same time, I think that he is very reasonable. Over a period of several months, he attended our Institute of Economics as a graduate student.”

The chasm is growing between Russia’s rich and poor

The expert believes that the new minister is a man that is “very decent, responsible and hard-working – a liberal without fanaticism, not a libertarian, but an independent thinker.”

“We need to revive our economy, which is in very poor condition. Its activity is currently at zero. The new minister will have to rebuild everything,” says Mr. Grinberg. He believes that the new head of the Ministry of Economic Development will be, at the very least, no worse than his predecessor.

However, the expert had one reservation – before the elections in 2018, we should not see any changes. “Much will depend on the general government line, on the philosophy of economic policy, which is now configured solely on survival and stability. Some characterize this policy as one of stagnation. I think that the overall tone of the economic policy will be set by the president,” predicts the Director of the Institute of Economics.

Resetting of the Ministry of Economic Development

The president set the tone during his address to the Federal Assembly. The basic principles of economic policy, as outlined by the head of state in his address to the State Duma, were based on the spirit of Alexey Kudrin, who left his post as finance minister back in 2011, but has not lost his influence.

The new minister, just like Mr. Ulyukayev before him, comes from the Ministry of Finance. Sitting down in his ministerial chair, he announced that that ministry needed to be reset, and changes made to the way it worked. The Ministry of Economic Development should actively cooperate with the Ministry of Finance, the Central Bank and sectoral ministries, said Mr. Oreshkin.

Sergey Belyakov, Head of the Association of Private Pension Funds and former Deputy Minister of Economic Development, noted that although the basic parameters of economic policy are obvious, it seems that the new leader will be guided by the government agency from which he hails.

“In general, it is clear what needs to be done, and what should not be done, in order to stimulate economic development. The key measures are – further development of the free market, deregulation of the economy, improving its competitiveness, reducing the dependence of economic entities on the state, and implementation of privatization programs. I think that the new minister will increasingly focus on fiscal capacity,” Mr. Belyakov told Lenta.ru.

In his previous post, Maxim Oreshkin is remembered for some statements he made and actions he took, on the basis of which we can, more or less, understand what the new minister’s economic program will be.

Is Russia’s economic crisis over?

As the Deputy Finance Minister, Mr. Oreshkin endeavored to protect retirement savings from yet another freeze, explaining that this would not help to save the Reserve Fund, but rather due to a reduction of long-term money in the economy, the state budget would face a shortfall in revenues.

To refill the Reserve Fund, he proposed the privatization of Rosneft. In August of this year, Mr. Oreshkin warned that if state assets were not sold off, the fund would quickly dry up.

He is also remembered for the fact that, in 2015, he recommended changing the formula for calculating taxes on mineral extraction, to remove “excess” profits from the oil companies, caused by the devaluation of the ruble. Back then, Mr. Ulyukayev managed to defend the interests of the oil producers. It is unclear what Mr. Oreshkin’s position, in his new capacity, will be in the area of ​​taxation.

Another important point. The main friction between the Ministry of Finance and Ministry of Economic Development was due to different approaches in making forecasts. Mr. Ulyukayev’s team prepared them with an eye on growth, seeking rapid growth in the GDP. This, in particular, meant high inflation, something that was contrary to the position of the Central Bank and Mr. Siluanov’s team.

The Central Bank and the Ministry of Finance, in their forecasts, set goals for low inflation, low economic growth and a weak ruble. The fall of the national currency helps to fill the state budget, for which the Ministry of Finance, of course, is responsible. “Now, the most important thing that we see happening – is the marriage of ideologies,” Mr. Siluanov commented on the promotion of his mentee. According to him, now the government agencies will be able to quickly “find joint solutions that will benefit the economy and the organization of the work of the government.” By 2019, the Ministry of Finance has forecast the US dollar to trade at 71 rubles. Therefore, most likely, the Ministry of Economic Development will also be placing its bets on a weak ruble.

“The worst is behind us, but the growth rate is certainly insufficient. Therefore, the main task for the coming year – is to prepare the key measures that should remove structural obstacles to the growth of the Russian economy,” said the new minister, during a meeting with President Putin on November 30.

In fact, the statement that “the worst is behind us” – means that under Mr. Ulyukayev “the economy had reached the bottom”. That is, it cannot get any worse, so the only way now is up. Moreover, the fact that the new minister prefers not to be looking for the bottom, but seeking drivers of economic growth, looks like a more optimistic attitude.

“The only place where we can find the accelerator pedal, is outside the state, in the private economy,” Mr. Oreshkin said in early November. This sounds heartening, against the background of the famous statement made by his predecessor, that “we have a Minister of Economic Development, but we have no development to speak of.”

Yakov Mirkin, Head of the International Capital Markets Department at the Institute of World Economy and International Relations, RAS, said that every economic minister must first and foremost have the desire to create the right conditions for growth.

“We need a very active position, not just statements of what is happening with the Russian economy, remaining dependent on the developments in foreign raw materials markets, and on the dollar. This we expect from any new appointment,” he said in an interview with Lenta.ru.

On principle, the expert refuses to make personal evaluations. “The post, title and responsibilities may change a person’s positions. When a person moves from the Ministry of Finance to the Ministry of Economic development, he talks about stimulating growth. And vice versa – when he passes from the Ministry of Economic Development to the Central Bank, he starts talking about stability, and curbing inflation. However, what is truly important here is that, irrespective of the transitions from one post to another, the officials remain committed to economic growth, modernization and improving the quality of life,” he explains.

Business Ombudsman Boris Titov spoke more bluntly on his page in Facebook: “Maxim Oreshkin is a bright representative of the monetarist school. His appointment is an indication that the government is not going to change the course set by the monetary authorities, and will continue with its tight monetary policy, and financial contraction.” According to him, the appointment of Mr. Oreshkin means a significant strengthening of the position of the Ministry of Finance.