Russian parliamentarians to get their own social network 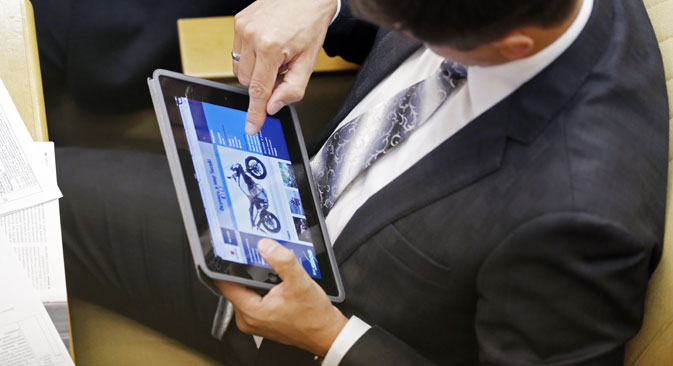 Russian parliamentary deputies will soon be able to hold free-form discussions on legislation using a special online social network. The portal’s founders hope that the network will strengthen links with regional deputies in distant parts of the country and serve as a platform for dialogue.

The Russian government is to introduce a professional social network for deputies of all levels called Parliament Portal. The portal's development is being overseen by a special working group and will be located at the address portal.parlament.gov.ru (the site is currently inaccessible).

Besides the people's representatives themselves, various experts - lawyers, political scientists and economists - can be invited to register accounts and take part. Everyday, visitors to the site will be able to read about initiatives and publicize the information via existing social media for further discussion.

A new mode of legislative activity

The new social network fulfils a need to bring Parliamentary deputies together, its founders believe. As head of the working group for the project, Vice Speaker of the State Duma Igor Lebedev, told Izvestiya, Russia has 245,000 deputies at various federal levels, and they are insufficiently consolidated.

Lebedev considers the network to be “a tool for finding workable solutions to serious problems. “The new platform not only enables us to organize discussion of any deputy's initiative in real time, but allows that deputy to attract compatriots from the most distant and distinct regions of Russia,” said Lebedev.

The site contains features to ward off the fake accounts that are often found on ordinary social media sites. Before receiving an account, each legislator must verify his or her credentials with the moderation team by sending a scanned copy of their official deputy certificate.

The portal's founders believe that with the resources at their disposal, they will be able to open a dialogue with regional deputies and provide them with a platform for communicating their views, since federal deputies already have enough access to the mass media in order to air their opinions. Through such interactions, State Duma deputies hope to receive support from regional legislators for significant and pressing projects.

Regional legislators consider the initiative useful. Moscow's Regional Duma is already preparing to introduce the new social network. One of its deputies, Alexander Dvoinikh of the Committee for Transportation Infrastructure, noted the importance of exchanging views in the professional sphere.

Transparency of the legislative process

Having taken part in discussions on the parliament e-project, media expert Anton Korobkov-Zemlyansky told RBTH that the network has a different function than most social media sites.

Who is Mizulina, and how can the majority be confronted?

“Deputies can interact without any specialized platform,” he said. “In this case, we simply have the format of a social media site, with a registered user and his identity, and people can exchange information about their work. There won't be any games or pictures from your vacation,” he explained.

According to the expert, the idea for such a project appeared several years ago. Originally, there was a proposal in the State Duma to create a resource based on the existing Russian social network VK (VKontakte), but eventually a separate platform with additional protections and features was chosen instead.

Korobkov-Zemlyansky notes that professional networks of this type are not uncommon and are entirely effective. “People can easily share expert information amongst themselves,” the specialist said. “At the moment, there is nothing of this sort for the upper chamber of the Russian parliament, the Federation Council, and the 'Open Government' project is aimed at fulfilling this need.

He went on to point out that the basic purpose of these social platforms is to make the governmental process more transparent.

“Such new platforms will allow anyone so inclined to observe the processes of lawmaking. At the same time, the network will be connected with ordinary Russians through VKontakte and Facebook, attracting society's attention to proposed bills and allowing deputies to discuss relevant issues with their constituents,” said Korobkov-Zemlyansky.

According to Margarita Zobnina, the Internet-Initiative Development Fund's research director, the usefulness of the social network idea will be determined by its realization.

“The majority of deputies already use Facebook and VKontakte, where one can create open or closed groups and discussions. So these features partly overlap with the functions of the planned social network, if it is to be analogous,” she explained.

But even so, a social network for deputies could increase the transparency of decisions and explain their logic. This is an important thing, given the prevailing public incomprehension of many new laws, said Zobnina.

In her opinion, social networks devoted to private companies improve the inner communications of those companies. They can assist in effectively resolving problems and involve more employees of different levels in the decision-making process.

“Much of this may prove useful for governmental bodies,” Zobnina explained. By media estimates, the project has cost taxpayers $5-$6 million. Anton Korobkov-Zemlyansky is convinced that the cost could have been three times less.