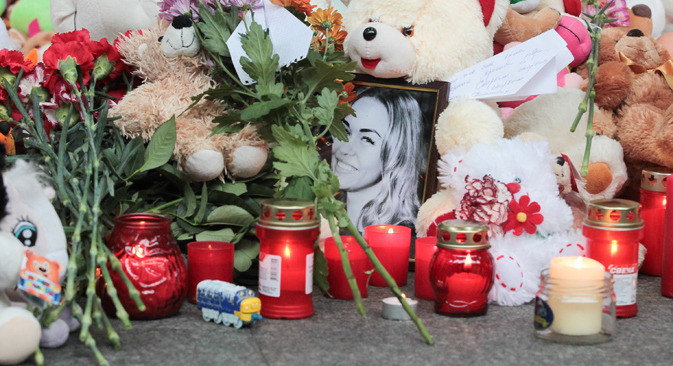 The plane crash in the sky over Egypt claimed the lives of 224 people.

Anatoly Medved / RG
The plane crash in the sky over Egypt claimed the lives of 224 people. Among them, there were many families with children, young couples in love and those for whom time by the sea was a welcome holiday. RBTH here examines the personal stories of some of the people that were on the flight from Sharm el-Sheikh to St. Petersburg.

The Kogalymavia Airbus A321 from Sharm el-Sheikh was supposed to land at Pulkovo Airport in St. Petersburg at 12:20 p.m. local time on Saturday, October 31. It had 224 people onboard, including 25 children and seven crewmembers. This charter flight from the Egyptian resort was carrying tourists from 13 Russian regions, as well as citizens of Ukraine and Belarus.

Their pages on social networks feature photos against the backdrop of the exotic eastern fauna and the sea with such cheerful comments as, "Hurrah! We are flying to warm up," "Flight delayed, but thoughts are already there" and "I never thought that #egypt would cause so many positive emotions."

By 11 o’ clock on the morning of the crash, the area for greeters at Pulkovo Airport began to be filled with the relatives and friends of passengers that were on this flight from Egypt. Not everybody was immediately aware of what happened. Those that had already heard the news stood aside near the information stands and did not know what to do or where to go.

Those that had arrived to greet their relatives and friends were crying and looking with hope at the arrivals board. It initially said that the plane was delayed. Half an hour before the expected landing, the information on the status of the flight disappeared. People kept trying to call their family, believing to the last minute that the worst could not have happened.

Just before departing for Egypt, the parents of nine-month-old Darina Gromova took a photo of her as she looked at the runway through the airport's glass.

Her mother Tatiana published the photo of little Darina with the caption "the chief passenger" on social media networks. Later, it became the symbol of the crashed flight with nearly a million people sharing it in remembrance of the tragedy. "None of them knew that this posting would be the last one in their lives" and "I have no words," people have written.

In August 2014, Tatiana and Alexei got married. In their wedding video, they can be seen dancing the waltz, as Alexei's mother wipes tears from her eyes.

"Thanks to my husband for this year, for the daughter, for the care and love!" Tatiana wrote. Next to the wedding video is another post: "Tania and Lyosha. How it all began..." This post contains their photos as children and then photos of the two of them together as adults. The last time she visited her account was on October 15, the day of their departure to Egypt.

The large Shein family was also coming home on the flight from Sharm el-Sheikh. They took their last pictures minutes before their departure to St. Petersburg right in the cabin – wife Olga and husband Yuri, Zhenya (11 years old), Valeria (10 years old) and three-year-old Nastya.

"Hi Piter (St. Petersburg – RBTH), goodbye Egypt. We're flying home," wrote Olga Sheina. The last two weeks of their lives were spent abroad on the family's first trip out of the country. The couple had marked the anniversary of their acquaintance and marriage on October 27.

"27.10.2005. This was the day when we met and fell in love with each other for centuries. Then just a few years passed until 27.10.2011. And on this day we got married. Now we are happy together and celebrate our anniversaries," Olga wrote.

Their son Zhenya played football and swam. Their daughter Valeria also swam; she had numerous medals and certificates from competitions. Yuri's page contains a video of their youngest daughter Anastasia taking her first steps and trying her "first pie." The toddler just could not stop eating.

Six months ago, Svetlana Krylova's older sister, who was an enthusiast of palmistry, looked at her hand. She noticed that the life line was less than half of the palm.

Olga just laughed, as she did not believe that her time would come soon. At the age of 30, she had a very active life with a lot of travel. Before leaving for Egypt, she was already planning a trip to China. She was with her husband Mikhail and 10-year-old daughter Kristina on the Kogalymavia flight.

"I Know I Will Not Return" was the title of a song that another passenger on the flight, 32-year-old Yekaterina Murashova, shared on a social media account shortly before her death. She was the reigning beauty queen of Pskov.

Her daughter Katya is eight. She wanted to take a vacation before her upcoming birthday, left her daughter in Russia and flew to Egypt with her mother.

"She said, 'Ksyusha, I'm leaving for a vacation. We'll meet on November 1 and I'll tell you where we will celebrate my birthday," a friend recalls. "Now I'll go to her funeral instead..."

The crew was on board along with the passengers.

"He was looking for himself, trying to find a place for himself on earth, and said he could not live without aviation, he loved the sky," says Anna, the wife of flight attendant Stanislav Sviridov.

He is survived by a young daughter and a son. Anna's voice trembled before the television cameras. During the last weeks before the crash, Stanislav was more timid, soft, as if he forebode his imminent death.

"I told him, 'Write when you get there.' But he was joking all the time, "You're a flight attendant, too, why do you need this? If something happens, you'll see it on the news." It seemed that he wanted to be ready not only for life, but for death, too and constantly watched and studied crashes from all angles," his wife recalls.

But a bad feeling saved another flight attendant. Oleg Yermakov should have been on this flight on October 31. It was his shift.

Two weeks before the tragedy, his father had a dream that a crash would happen and his son would die. "Oleg, leave the job," his father said then. A few days before the flight, the flight attendant wrote his letter of resignation. There were several reasons, Yermakov says, with his father's pressure being among them. He did not mention the dream to anybody else.

It is still difficult to be in Pulkovo. The building is unusually quiet and the area in front is covered with flowers and candles. People bring candy, cookies and pies for the children on board that didn’t make it back. Pictures drawn by children are brought to the airport by their parents.

"The number of flowers at the airport and even the postings on Facebook – it really helps [to soothe the pain]," wrote the sister of Anna Tishinskaya, a passenger on the flight, on her Facebook account.

But she continues to call her sister. "Every time I understand everything, but I hold my breath and wait for beeps. There are no beeps. The subscriber is not yet available. Like an idiot, I love to believe in the word 'yet.'"