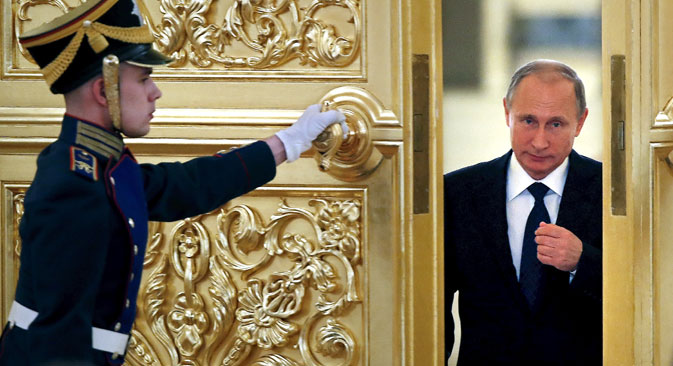 Reuters
Vladimir Putin has been named the most powerful man in the world once again. The president of Russia took first place in Forbes' annual ranking for the third year in a row. German Chancellor Angela Merkel and U.S. President Barack Obama took second and third place, respectively. In addition to the Russian president, the Most Powerful People list includes three other Russians – Igor Sechin, Alexei Miller and Alisher Usmanov.

Vladimir Putin topped the Most Powerful People list for the first time in 2013. At the time Forbes noted the efforts of the Russian president in resolving the crisis concerning Syrian chemical weapons and the situation surrounding ex-CIA employee Edward Snowden.

Putin regularly appears at the top of the list in such rankings. In the spring of 2015, readers of the U.S. magazine Time named him the most powerful man on Earth. Similar results were presented by the Agence France Presse (AFP) in December 2014.

Experts believe that this time Putin’s recognition was influenced by Russian military's operations in Syria against the Islamic State terrorist organization. The organization is banned in Russia.

For a long time, Russia was considered an outsider on the world stage. In many ways Putin has been able to recover the country's original positions.

Pavel Salin, director of the Center for Political Studies at the Financial University under the Russian Government, has taken note of this. "In the past few years, the entire global political system has gone into a state of permanent instability,” Salin says. “In other words the influence of the fundamental players has decreased significantly. In such a situation, the role of players that were already written off, at least as primary ones, increases, and Russia has recently been a force that – of course, not always successfully, but nevertheless – balances some of the other forces."

Forbes points out that Putin's approval rating has increased inside Russia, as well. According to the Russian Public Opinion Research Center (VTsIOM) in October, almost 90 percent of Russians approved of the work of the president despite the deterioration in the economy.

A survey conducted by the Public Opinion Fund showed that 75 percent of Russians would vote for Putin if presidential elections were held today. However, such surveys do not always directly relate to the activities of the president, says political scientist Pavel Svyatenkov.

"Secondly, it often happens that respondents consider it a kind of test of loyalty to the authorities and also usually respond that they have great respect for the president,” Salin says. “At the same time, the rating of the government, for example, is much lower."

As a rule, Putin does not comment on such lists. In 2013, he said that his work should be evaluated by Russian citizens. The influence of the country is shown not by magazine rankings, but by the real power of the state, the president said.