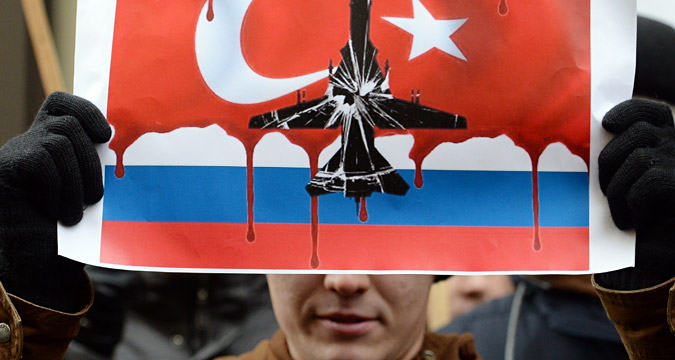 A protester against the actions of the Turkish Air Forces at the Turkish Embassy in Moscow.

Alexander Vilf/RIA Novosti
The shooting down of a Russian jet by Turkey's air force has left many Russians indignant and confused, while in Turkey the crisis in relations between Moscow and Ankara has also become the hottest talking point. RBTH looks at social trends and speaks to ordinary citizens to gauge opinion in the two countries.

The reaction in Russia

Just a couple of hours after Russians were informed that a Russian bomber had been shot down by the Turkish air force on Nov. 24, demonstrators were standing in front of the Turkish Embassy in Moscow. By the evening a huge crowd had gathered.

On the following day similar actions were observed not only in Moscow but also in other cities: Kazan, Stavropol, St. Petersburg. In some places social organizations arranged the demonstrations, in others it was done by political parties and elsewhere people came on their own initiative.

Russian social networks flooded with harsh criticism of Turkey. Immediately after the incident someone hashtagged #VozmezdieNeizbezhno (“RevengeIsInevitable” – a phrase that Russian President Vladimir Putin used after the bombing of a Russian passenger airliner in Egypt) and #UdarVSpinu (“StabInTheBack” – this is how Putin characterized Turkey's actions).

By using another popular hashtag, #NeEduvTurtsiyu (“NotGoingToTurkey”), Russians called on each other to cancel their plans to visit the country (Turkey is the top destination for Russian tourists). Others were just worried that now they would not be able to see the tourist landmarks.

"Two-three years ago I thought, well, Egypt, but what's there to see there? It's closed now but it won't go anywhere. I'll see it sooner or later. And Turkey? Everyone's been there except me," wrote one young woman.

However, there are people who do not share the prevailing mood and say that they still want to vacation in Turkey.

"I'm preparing to go. If the military plane hadn't been flying over someone else's border, it wouldn't have been shot down. Have they forgotten how Russia once downed a Korean passenger plane [in 1983 – RBTH], mistaking it for a military one," wrote another web user.

The reaction in Turkey

For the second year in a row the only thing you hear on the streets of Istanbul are the words "Russia," "Russians," "Putin" and "Syria."

Mustafa Kaiya, from the Sehri Simit confectionery house in Istanbul’s Sisli district, lays the blame for the incident with the Russian plane at the door of the Kremlin.

"The Russian government is to blame for everything,” he said. “They were warned 10 times. Now big problems await Turkey and Russia. But the people are innocent. I've always had respect and admiration for the (Russian) people and will in the future."

Turkish demonstrators hold a banner and placards that read " We are with resistance against aggressors" as they protest Russian support to Assad regime in Syria, outside the Russian embassy in Ankara, Turkey, Nov. 24, 2015. Source: AP

Murat Koch, a pensioner, expressed suspicion about Russia’s true motives in carrying out airstrikes in Syria.

"Why is Russia getting involved in Syria? Who is it bombing there? ISIS? I doubt it very much… We, not you, are flooded by thousands of refugees!” he said. “We've turned a blind eye to Crimea, we did not join the sanctions against Russia. Did you hear what Putin said yesterday? How can we be accused of supporting terrorism?"

'I'm not a supporter of the Erdogan regime and his policy in Syria,” said another citizen, who did not give his name. “He thought Assad would leave, but everything turned out to be more complicated. Syria for us is a very sensitive issue. Russia says that it is striking ISIS but we don't know who exactly it is bombing. Everything is complex and ambiguous. But I hope very much that the two countries normalize their relations and avoid an open conflict."

Istanbul is home to several tens of thousands of Russians, many of whom are particularly distressed by the current situation. One of them is Alina, who was born in Russia but married a Turk.

"My husband and I are watching the news,” she said. “We turn on a Russian channel. They're talking about the incident with the downed plane. I translate everything to my husband: who is speaking, what they're saying. Then, as a response, my husband explodes: ‘It's all a lie! Turkey did the right thing! We were protecting our state borders.’"

“We had a big argument about this,” she said. “It's already the second day that we're not talking. Even though my husband is not at all a supporter of Erdogan. It's a very tense period. It's unclear what will happen later. It's frightening and sad that it all happened like this."