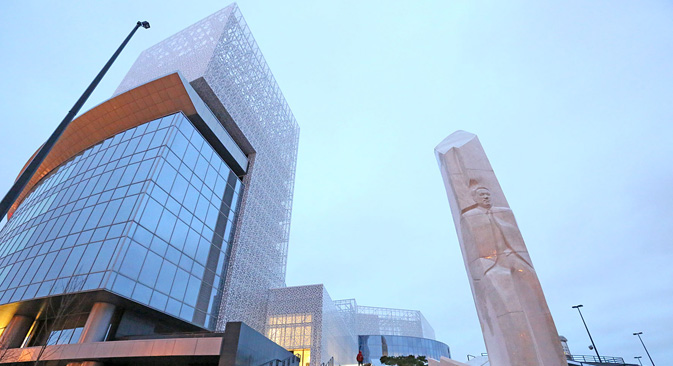 A museum to Boris Yeltsin in Yekaterinburg.

Tatyana Andreyeva / RG
November 25 saw the official opening in Yekaterinburg of a museum dedicated to Boris Yeltsin, Russia’s first president. Besides documenting Yeltsin’s tenure as leader of the country, the museum also explores the turbulent history of the 1990s.

A museum to Boris Yeltsin has been unveiled in the Urals city of Yekaterinburg, where Russia’s first president spent most of his life and career before the demands of high office called him to Moscow.

The museum, which is effectively devoted to the history of the early 1990s in Russia, was officially opened by Russian President Vladimir Putin and Yeltsin's widow Naina Yeltsina on Nov. 25.

"The work of any leader of the country, no matter how many years he was at the helm, is his time," said Yeltsina at the ceremony.

"The era in the history of the country, with all its achievements and mistakes. And we need to make sure that in the presidential center of not only Yeltsin, but of each successive head of state, one can find answers to any questions related to his time. Of course, to achieve this, everything has to be absolutely true there. No gloss – only the documentary truth about that time," she said.

The museum is the first example of its kind in Russia. The exhibition has been created by museum designer Ralph Appelbaum, who built the Jewish Museum in Moscow several years ago. His name on the list of the organizers means just one thing – interactivity and immersion in the era are guaranteed.

The museum already has audio guides in English and is preparing to translate them into Spanish, French and German, allowing foreigners to get acquainted with Russian history.

However, the archivists were faced with a serious problem while collecting artifacts for the museum; it turned out that a large number of essential documentary videos had not been preserved because the tapes had not been archived but were instead re-used.

Some of the museum’s showcases have been left empty to allow future visitors to share their things from that time and tell their own story.

The museum is divided into seven areas – "seven important days in the history of the country." Each of these zones presents stages of Russia's development in the late 20th century: the anticipation of change; the August coup (the attempted removal of Soviet President Mikhail Gorbachev from power in August 1991); unpopular economic measures; the birth of the Constitution; "Vote or Lose" (the famous slogan of Yeltsin's second election campaign); the presidential marathon; and Yeltsin’s farewell to the Kremlin on Dec. 31, 1999.

25 years of post-Soviet Russia: How far has the country come?

"The rooms are arranged in a circle, referring to the symbol of history – the Wheel of Time," said Lyudmila Telen, deputy executive director of the Yeltsin Center. "This structure was proposed by renowned Russian film director Pavel Lungin."

At the beginning, visitors are treated to a film about the history of Russia from ancient times to the present, which, among other things, documents the origins of democracy in the country and its development.

Then come documents, photos and videos exploring attitudes to history and Russians’ changing views on various historical events. The history of the country's life is intermingled with Yeltsin's personal history. One hall is occupied by a real trolleybus of the kind used by the future president when he was a Moscow official. A film about Yeltsin’s work in Moscow is screened inside.

Three rooms seem to be the most emotional – the ones dedicated to the coup, the war in Chechnya and Yeltsin's last day in office.

The first shows the typical interiors of a Soviet apartment, the phone rings, and from the conversation in the receiver one can understand how people reacted to the sudden appearance of tanks on the streets of Moscow in support of the new government. Opening the door of the room, visitors walk out directly onto Moscow's 1991 barricades, made of barrels, concrete blocks and grilles, while a chronicle of events is shown on the wall.

In the room dedicated to the Chechen War of 1994-1996, there are bullet holes in a convex wall. By looking into them, visitors can examine photographs of those tragic events.

The last room is Yeltsin's office – just as it was in the Kremlin – where he said goodbye to the people on New Year's Eve 1999. There is even a frosted pattern on the glass and a view from the window. His jacket hangs on the chair, while a cup of tea and the pen with which he signed his decrees are on the table.