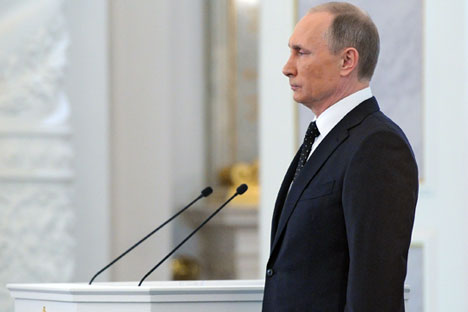 Russian President Vladimir Putin during his annual address to the Federal Assembly in St. George's Hall of the Grand Kremlin Palace in Moscow, Dec. 3, 2015.

EPA
Analyzing Russian President Vladimir Putin’s annual speech to the Federal Assembly, Russian observers interviewed by RBTH underlined the contrast between Putin’s harsh stance toward Turkey and his apparent readiness to cooperate with the West, though they said the address was lacking in groundbreaking ideas.

Against the backdrop of Moscow’s military operation in Syria, terrorist attacks in Paris and on a Russian airliner in Egypt, as well as the recent incident involving a Russian Su-24 bomber shot down by Turkey along the Syrian border, it was expected that Russian President Vladimir Putin's annual address to the Federal Assembly on Dec. 3 would pay special attention to international security.

In many ways, these expectations were met: Speaking of Turkey's actions, Putin pledged not to forget what he called "this act of complicity in terrorism" and said that Ankara "will regret more than once what it did."

This aside, there was no audible military rhetoric in the president’s speech, while the domestic political agenda turned out to be almost liberal, though it could hardly be described as either groundbreaking or revolutionary.

'This won’t be limited just to tomatoes'

"The words 'this won’t be limited just to tomatoes' [Putin was referring to the recently introduced ban on the import of fruit and vegetables from Turkey to Russia – RBTH] are, in fact, the keywords of the address," said Mikhail Remizov, president of the National Strategy Institute.

Many Russians now afraid to go to cinemas and shopping malls

In his view, this means that Moscow is set on the most serious response possible and will take open-ended measures against Turkey.

Apart from his condemnations of Ankara, Putin’s other foreign policy points were notable for their lack of aggression.

"There was a statement about seeking a broad coalition in the fight against terrorism, especially with the Western powers," said Yekaterina Schulmann, a political scientist and associate professor at the Russian Presidential Academy of National Economy and Public Administration. She described Putin’s delivery as rather conciliatory in the current situation.

"In addition, there were several declarations throughout the text that Russia is willing to cooperate, to participate in global markets, economic and international organizations," she said.

Yevgeny Minchenko, director of the Moscow-based International Institute of Political Expertise, also noted that on this occasion there was not even a hint of anti-Western rhetoric in Putin’s words on foreign policy; all the critical arrows were directed against terrorists and Turkey.

Putin addressed the domestic political and economic parts of his speech to different groups of citizens, and they came across as relatively positive.

"The main thing that he said was that Russia is a land of opportunities, you are free to work in a large number of fields, we will not create obstacles," said Dmitry Orlov, CEO of the Agency for Political and Economic Communications, close to the Kremlin, commenting on Putin's speech.

There were also anti-corruption proposals, specifically about the transfer of accounts relating to budget funds to the federal treasury – for even greater transparency in budget spending – and Putin also spoke about the introduction of clear criteria for the effectiveness of import substitution.

"The president has traditionally demonstrated his ability to respond to challenges in a non-banal way," said Orlov.

However, Remizov saw no groundbreaking economic ideas in Putin's speech. In his view, it was about purely cosmetic measures, which do not suggest a revival in economic growth, even if they deserve support.

According to Yekaterina Schulmann, the speech's domestic economic part turned out to be almost liberal, at least as far as is possible in the present circumstances.