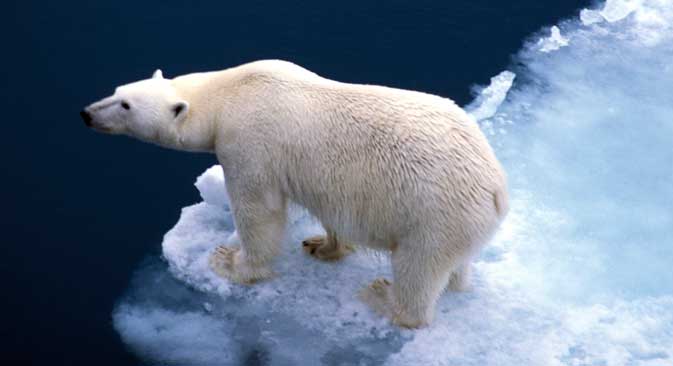 Getty Images
During the recently concluded climate talks in Paris, Russia had a chance to demonstrate the progress it has made combatting carbon emissions, but much remains to be done.

A polar bear gazes out at the Arctic Ocean from his perch on an iceberg. The warming of the Arctic has made life difficult for these northern bears, increasing the distances they must swim between icebergs and isolating them from their food supply. Source: Getty Images

The UN climate conference in Paris went into overtime, but with the text of the agreement fi nally ready, the summit looks like a success. Against the odds, leaders of 195 countries now seem to be on the verge of reaching a unanimous agreement to combat climate change.

Russia played a constructive role in the Paris process, and it can claim its share of the credit in COP21’s eventual success. For Russian President Vladimir Putin, who attended the summit, its positive outcome should give the sense of, if not accomplishment, then at least some geopolitical relief. For the fi rst time in nearly two years, Russia was not singled out as a unique threat to the world order, and meetings in Paris between Putin and U.S. President Barack Obama, and with British Prime Minister David Cameron, indicated that Russia may have found some common ground with the West on the issues of terrorism and climate change.

Putin’s address delivered at the start of the summit was short — five minutes — but to the point. “Climate change is one of the greatest threats humanity is facing,” he said, noting that improving energy efficiency and reducing greenhouse gas emissions is an important priority for Russia. From 2000 to 2012, Russia reduced its energy consumption by 33.4 percent. An additional reduction of 13.5 percent is projected by 2020. Putin noted that Russia went above and beyond its obligations under the Kyoto Protocol to reduce greenhouse gases. The amount of additional greenhouse gas savings by Russia is equivalent to the global greenhouse gas output over the course of one year, he said.

During the 2000s, Russia adopted a new energy policy that required the reduction of greenhouse gases.

During the same period, Russia doubled its GDP. These numbers show that economic development and environmental conscienciousness do not have to be mutually exclusive.

How the UN is trying to save wine from climate change

Russia’s progress is impressive, but it should be noted that it was achieved, in part, because Russia started with a very low base. Endowed with the Soviet's industrial assets, Russia's economy is still one of the most energy-intensive. According to Moscow State University economist Pyotr Kiryushin, in 2012 Russia used twice as much energy per dollar of GDP than the U.S. In part, Russia’s high energy consumption is explained by its location. But other major factors include outdated Soviet technology and energy subsidies that encourage overuse of fossil fuels. Not surprisingly, the major contributor to greenhouse gases is the fossil fuel industry itself. In 2009, oil and gas extraction was responsible for 50.4 percent of all industrial pollution in Russia.

Some progress has been made in many sectors of the Russian economy. Examples of improvements are numerous, but two cases are worth noting. Russian electricity-generating stations are increasingly using natural gas instead of coal and oil, and Russian automakers, including the Kamaz truck manufacturer, have adopted stringent European emission standards for their engines.

No resting on laurels

For Russia, achieving future progress will be more difficult, as the low-hanging fruit has already been collected and further progress will require investment. During the post-Soviet period, Russia still enjoyed the Soviet industrial dowry, which is now nearly fully utilized. Improving energy efficiency and conservation further will require capital investment.

Can carbon nanotube technology save the planet?

Some improvement may come from disruptive technological innovation. During his speech, Putin mentioned one such potential technology: nanotubes based on the Nobel-prize winning discovery of graphene material by Russian scientists.

Graphene nanotubes act as an additive that improves the qualities of basic materials ranging from aluminum to rubber, increasing their durability, and consequently reducing waste.

Even if nanotube technology lives up to its stated potential, to fully benefi t from technological progress, Russia needs cooperation with the West. It will be difficult for Russia to combat climate change alone without access to Western capital and technology, both of which are now out of reach due to sanctions. Russia has plenty at stake. Global warming may bring occasional benefi ts for the country, such as access to the Northern Sea Route through the Arctic, but those benefits do not seem worth the risk of eroding shorelines and the other ills that come with a warming climate. The impact on permafrost areas that account for 60 percent of Russia’s territory could be catastrophic.