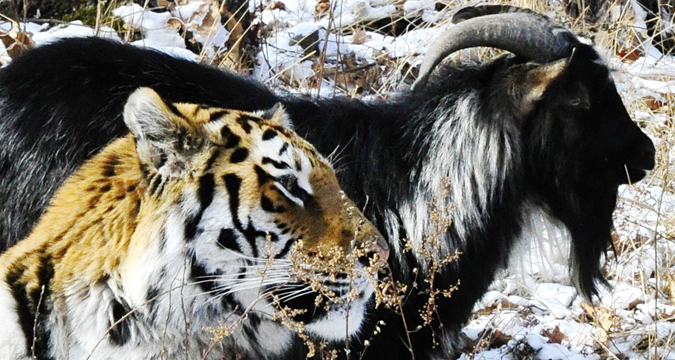 Amur, a Siberian tiger, and Timur, a goat, in Safari Park in the village of Shkotovo, Nov. 27.

The friendship between a tiger and a goat has captured the imagination of the world after details of the friendship - one might even call it a 'bromance' - emerged at a wildlife reserve in Russia's Far East Primorsky region.

The unlikely tale of the predator Amur who preferred friendship to eating Timur the goat for lunch will soon be beamed worldwide thanks to web cameras that are to be installed at the Primorsky safari park.

RBTH offers its version of what we could learn from the animals that became unnaturally good friends.

1. Ability to make the first step

Source: Yuri Smityuk / TASSThe first thing that deserves attention is Timur's bravery. It seems that it never occurred to the bold little goat that he had been brought to the park to play the role of victim. His initiative, courage and interpersonal skills utterly shifted the intended scenario – from a gastronomic to an amicable one.

Source: Yuri Smityuk / TASSA readiness to make new friends and try new things was the starting point for this touching story of friendship, which began with reciprocal interest of both the animals.

Source: Yuri Smityuk / TASSMake no bones about it, Timur has driven his new friend out of the tiger’s rightful place. Having occupied the sleeping space of his striped friend, the goat enjoys the status of the host, while the tiger has to snooze on the ‘upper berth’ – on the roof of his hovel, and look for a space in the expanses of the safari park during daytime.

Source: Yuri Smityuk / TASSThe freedom-loving tiger has to share his territory with Timur - who was supposed to be his lunch and now enjoys all the rights of a lord of the park. Naturally, sometimes there is a display of hysterics, but, all in all, Amur manages to cope with his emotions.

If Amur ignores Timur, doomed to while away his time alone, the plucky goat is not offended. He simply stands guard over the sleeping tiger.

Source: Yuri Smityuk / TASSLove and hate are just one step apart. Timur and Amur have become an example that this worldly principle works both ways: sometimes we can spy a friend in our natural enemy.

Let’s hope that the balance does not suddenly revert - and Timur one day end up as plat du jour for his big cat friend.