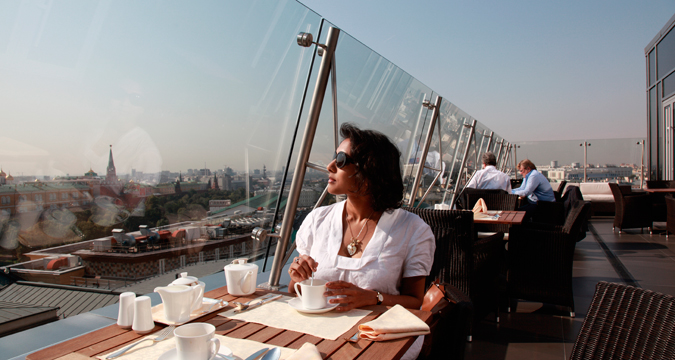 Dining out in nice restaurants, like Moscow’s White Rabbit is a thing of the past for many middle class Russians.

Getty Images
Russia’s middle class, which was growing in the early 2000s, has born the brunt of the economic downturn along with small-business owners.

They created their wealth in the 1990s, enjoyed the fruits of the oil-rich 2000s and hoped to give  their children a better future. They are the Russian middle class, once a rapidly growing segment of society in Moscow and other big Russian cities. Made up of those of both liberal and conservative political bents, these people opened small businesses, bought comfortable foreign-brand sedans and ate out in nice restaurants.

Today this middle class, already hit hard during the 2008 global financial crisis, is rapidly shrinking, due to an unstable economic situation, Western sanctions and the Russian government’s own economic policies.

“The creative, free, peaceful, nonaggressive, open-minded person feels like a victim today — a sheep who has had the last of her wool removed,” said Irina Khakamada, a liberal politician and a  member of the presidential council on human rights, during a meeting of the group in October.

The middle class is suffering the most from the country’s current economic downturn. Their purchasing power decreased rapidly as the dollar value of their salaries halved with the collapse of the ruble. A person who worked for a private company and earned a comfortable salary of $3,000 per month before the crisis is now making $1,500.

How is the Russian middle class defined? Sociologists say a middle class Russian should have enough income to do the following five things: buy a good quality car, such as a Toyota; take a foreign vacation; pay for their childrens’ educational needs; get a mortgage to buy an apartment; and pay for private insurance.

In 2013, about 18 percent of the population fit this criteria. Today that number is around 13 percent and falling, according to a recent government study on the middle class.

While some sociologists say that the middle class existed in the “classless” Soviet society and was made up of doctors, engineers and university professors, others think that the term was not really applicable in Russia until after the fall of the Soviet Union. The concept of the middle class in the Western understanding was really absent from Russia for most of its history. During the imperial and Soviet periods, the role played by the middle class in questioning authority and its rules was instead filled by the intelligentsia — welleducated people who did not come from the artistocratic classes. They questioned the political establishment from an ideological perspective rather than an economic one. According to this theory, Russia began to develop a Western-style middle class only in the 2000s, when the market economy truly took hold.

Small- and medium-sized businesses are also disproportionately affected by the economic downturn. Many entrepreneurs who started small businesses a few years ago now find themselves unable to meet rent payments, many of which are still set in euros or dollars, or make any profit selling items imported from abroad.

In an interveiw with Russian News Service radio last month, business ombudsman Boris Titov said that the number of medium-sized businesses was down 13 percent from 2014.

Olga Promptova, C.E.O. of dd-atelier.com, a company that sells lingerie online, said that she feels that harder times are coming: “I see fewer and fewer possibilities for development. People have less money, they are economizing and they rarely go on a shopping spree,” Promptova said.

Promptova, an energetic, stylish businesswoman, founded her business in 2007 because she had problems finding lingerie she liked. She said that the fall in the value of the ruble has made the cost of the foreign-made fabrics she uses go up 20–30 percent, increasing the prices of her items, and consequently turning many clients away.

“Those were the woman who bought the same products two years ago without thinking much,” she said.

Still, there have been some positives, too, since the cost of producing the items in Russia has not grown. “Now we can have a partial win, but this cannot last forever,” Promptova said. “In order to give people the price they want, we have to buy cheaper materials to make cheaper products. But that means producing things of different quality and we don’t want to do that.”

For another Russian businessperson, Boris Akimov, the government’s policy of import substition has been a helping hand.

An artist and former editor of the Russian edition of Rolling Stone, Akimov’s company, Lavka-Lavka, sells locally produced produce and meats.  “We have an audience that is loyal to us, and there always will be people who want to buy quality farm products,” said Akimov.

He added that his business has grown 25 percent since last year, thanks to Russian sanctions that banned imports of most fresh foods from Western countries.

To illustrate his business success, Akimov said that his company is opening its own market of farm products at an IKEA-run supermarket near Moscow: “Even a middle-class buyer will be able to afford to shop there,” he said.

Viktor Yermakov, head of an organization that supports small- and medium-sized businesses, said that import substitution strategies can help these kinds of operations, but they need more government support.

“You have to have the best product on the market and in order to increase your quality you need loans,” said Yermakov, noting that there are government programs available that allow business people to take out loans at a rate of 10.5 percent for projects that fit a specific criteria.

However, Yermakov said that despite some efforts made by officials to help small- and medium-sized businesses, bureaucracy and red tape remain the major source of concern.

“Even when the president gives orders not to put extreme pressure on businesses, officials on the ground are doing the opposite and that kills business,” he said.

According to Yermakov, only half of Russia’s regions have tax incentives for small business ventures.  “Despite the fact that those regions that have done so had an increase in tax collection, many regional officials are afraid to take responsibility to do similar measures. I don’t think they are some kind of saboteurs; they are just people who care less,” he said.

A new government agency has recently been set up to help small- and medium-sized businesses. The  new Corporation for Small- and Medium-sized Business Development is headed by an energetic pro-business official, Alexander Braverman. His goal is to help businesses get government loans, and to help them work through the red tape associated with government invcentives. Nevertheless, when announcing Braverman’s appointment, Prime Minister Dmitry Medvedev emphasized that there’s only so much the government can do. “The state will never be able to as much as business could do … ”, Medvedev said.

Read more: How much are Western sanctions hurting Russia's economy?