Vladimir Putin invites Jews from Europe to move to Russia 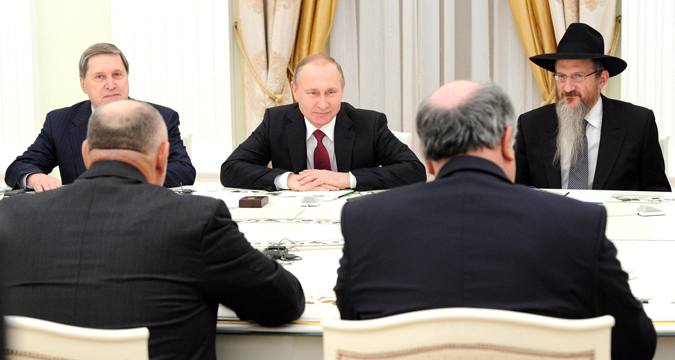 Vladimir Putin during the meeting with members of the European Jewish Congress.

Russian President Vladimir Putin held a meeting with members of the European Jewish Congress on January 19, 2016 where he invited Jews to escape the anti-Semitic mood in Europe and come to Russia, writes the Kommersant business daily.

During the meeting, the Viatcheslav Kantor the president of the congress said that today the situation with Jews in Europe is “the worst since the end of World War II.”

According to Kantor anti-Semitism is growing in European countries and that “Jews are fleeing from what yesterday was a prosperous Europe.”

“Let them come to us,” said Putin. “In the Soviet Union they left [the country], but now let them come back.”

During the meeting with representatives of the European Jewish Congress, Putin acknowledged that the Schneerson library, which is currently housed at the Jewish Museum and Center of Tolerance in Moscow, had been a “bone of contention” for some time with members of the American community.

“I hope that now that these books will become available to all that want to read them, that they can be used for scientific purposes and that such acrimony should already have no place,” said Putin. “In my opinion the situation has changed dramatically.”

Towards a resolution? Schneerson books get new home in Moscow>>>