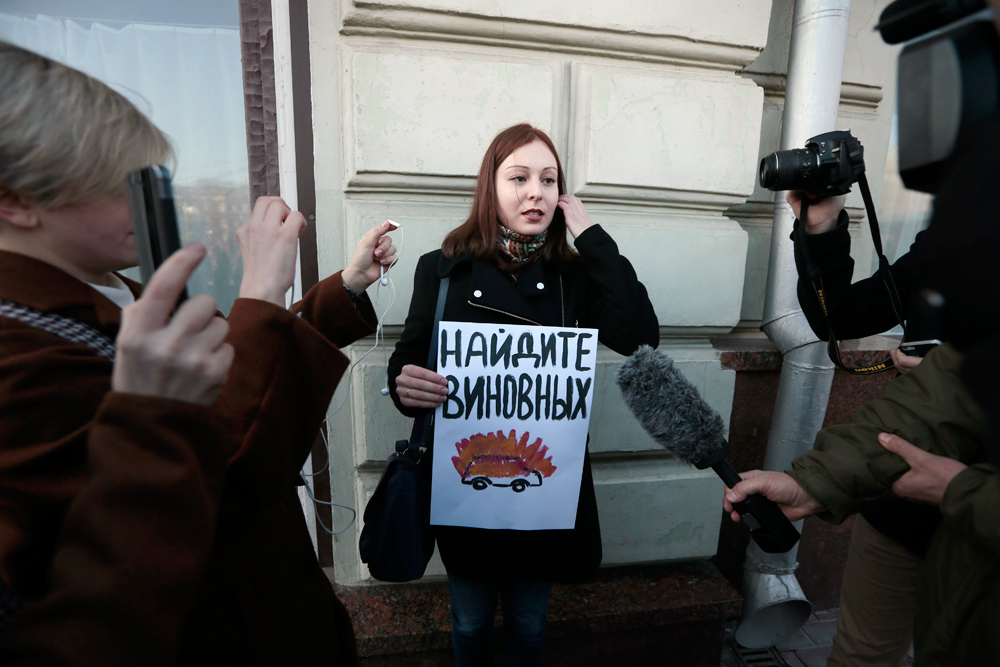 A human rights activist holds a poster as she pickets the Russian President's Administration building in Moscow, March 10. 2016. The poster reads: Find those, who are guilty.

AP
Reporters from Sweden, Norway and Russia have been taken to hospital after being attacked on the Chechen border. According to preliminary reports, the journalists were removed from their vehicle by their assailants and beaten up by men with possible links to Chechen leader Ramzan Kadyrov.

A group of journalists and human rights activists traveling on the Kavkaz federal motorway in Russia’s restive North Caucasus region have been beaten up by gunmen, Igor Kalyapin, chairman of the Committee for the Prevention of Torture, one of Russia’s leading human rights organizations, told Interfax on March 9.

The incident occurred on the administrative border between Chechnya and Ingushetia, as unknown masked assailants arrived in several cars and stopped a minibus and a Priora car that was accompanying the bus. According to preliminary reports, the assailants removed those on board, beat them up with wooden sticks, damaged the vehicle and then fled.

Eight people were injured in the incident, and four of them were taken to hospital, including Norwegian reporter Øystein Windstad of the Oslo daily Ny Tid, journalists from Sweden and Russia, and a driver who is a resident of Ingushetia.

"They have received medical care, and they are now undergoing a medical examination. They are all in a stable condition," Kalyapin told Interfax, adding that the most badly-injured was the Norwegian reporter.

"He had his teeth knocked out, he was beaten with a bat, he suffered stab wounds. It is also the strongest psychological shock," Kalyapin said.

"A female Swedish journalist suffered as well. Our press secretary Ivan Zhiltsov had his nose broken," he added.

Dmitry Utukin: An armed man is trying to kick out the door from inside our flat in Yandara (Ingushetia). https://t.co/Rt9UFTgtQW

Kalyapin believes that those responsible for the attack could be the same individuals who attacked an office belonging to human rights campaigners in Grozny, the capital of Chechnya, in June 2015.

The Kremlin has responded to the incident by calling the attack on the reporters “absolutely outrageous.”

"This is absolutely unacceptable, and we hope that the republic's law enforcement agencies will take the most effective measures to search for and find those guilty of this attack in order to properly ensure the security of both human rights activists and media representatives – both these and others, in the future," Kremlin spokesman Dmitry Peskov told reporters on March 10.

Johann Bihr, a representative of Reporters without Borders, told Russian business daily Kommersant that "loud statements from the head of Chechnya against his critics" had preceded the incidents involving journalists and representatives of the Committee against Torture.

In turn, Alvi Karimov, press secretary for Chechen leader Ramzan Kadyrov, told Interfax that "Bihr's claims demonstrate that he is not aware of the situation and does not possess reliable information, which is why he says absurd things in a harsh and irresponsible manner."

"Reporters without Borders did nothing when gangs of international terrorists abducted and shot dead journalists in Chechnya. Chechnya head Ramzan Kadyrov put a lid on that. Bihr and his colleagues probably do not like this," said Karimov.

Oslo expects all those responsible for the attack on journalists to face criminal prosecution.

"It is a terrible incident. We expect the investigation to be conducted in a proper way and the people responsible for this attack to be subject to criminal prosecution," Minister Counselor of the Norwegian Embassy in Moscow Olav-Nils Thue told Interfax.

A criminal investigation has been opened following the attack, a spokesman for the region's security services told Interfax.

"A criminal case has been launched under Article 167 (deliberate destruction or damage of property) and Article 213 (hooliganism) of the Russian Penal Code," he said.

Lyudmila Alexeyeva: In the end rights activists are taken into consideration>>>