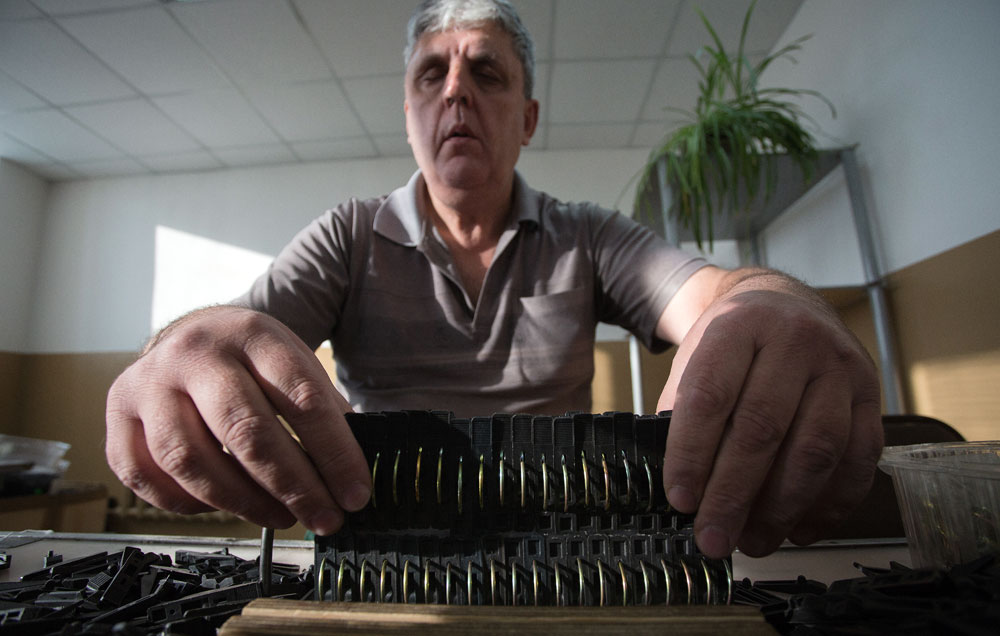 A visually-impaired worker gathering clothespins in a shop of the Obmytposhiv manufacturing enterprise of the All-Russian Association for the Blind.

Dmitry Feoktistov / TASS
RBTH learned where people with disabilities can land jobs and what salaries they can expect.

As is the case with many other countries, Russia faces the pressing problem of how to bring people with disabilities into the workforce. The most financially vulnerable part of Russian society amounts to a bit less than 10 percent of the total population: 12.9 million people in the country are disabled according to official figures, with 2.4 million of them working.

However, in recent years it has become easier for people with disabilities to find a job. For example, 18,000 vacancies of the 317,000 currently posted are available for job seekers with disabilities on the recruitment website HeadHunter.ru.

In many regards this change is happening due to the greater involvement of society in issues concerning the disabled. Russian television regularly shows programs dedicated to people with disabilities, portraying them as talented and capable members of society that can fulfill themselves and benefit the companies they work for. Organizations that supervise and help the disabled have become more active. They have launched teaching programs, trainings and some even cooperate directly with employers.

In what areas do people with disabilities work:

How do families with disabled members assess their financial situation:

how do families with disabled members assess their financial situation.
Create pie charts

Job of the future

"Blind programmers are in demand – this profession has a great future," says Pavel Osipov, development director at the Elita Group, the first Russian developer of smartphones (Elsmart) and portable computers (ElBraille) for the blind.

ElBraille is a portable computer for the blind, with a braille display and all the necessary software. This Russian invention has already interested many parties abroad. Orders for 1,000 devices have already been received from the U.S., France, Germany and Switzerland. The gadgetu2019s price will total about $3,000.
Gadgets for visually challenged people were created by the blind. The team of programmers and developers has been formed over the past three years. Previously, the company, which was founded by blind entrepreneur Nusret Adigezalov, acted as a distributor of foreign equipment manufacturers.

"There have, however, been cases when a man who bought typhlotechnics [artificially-produced aids to assist the visually impaired] or, for example, a PC, lately came back to us with an application of their own design," says Pavel Osipov. 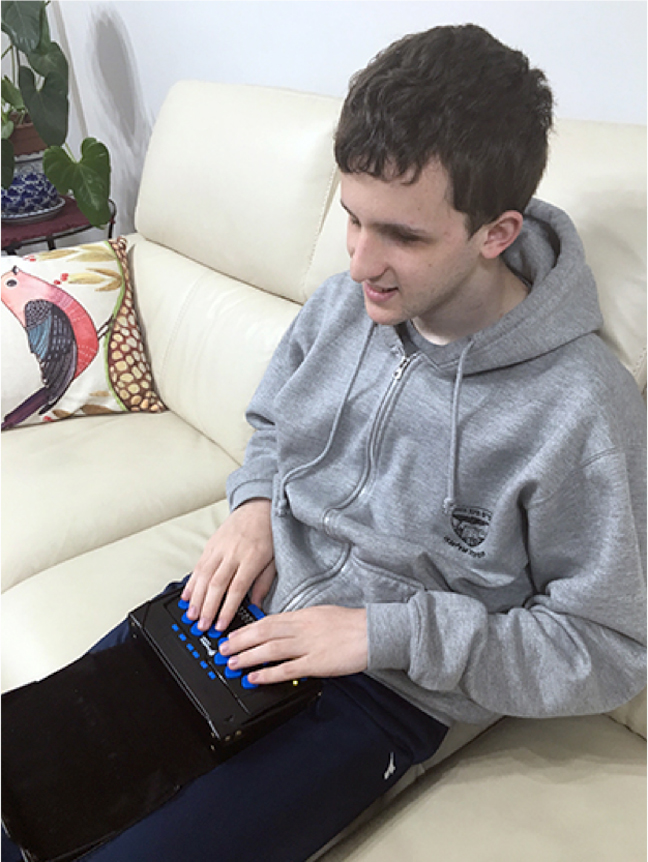 According to Osipov, innovators such as this are immediately offered a job by the company. In the end, the company hired 20 people throughout Russia, including programmers, designers and developers, many of whom work from home. The salary of blind workers is commensurate with the labor market average – about $870 per month. The Elita Group is planning to increase the number of blind programmers in the future.

The return of professions from the past

People with disabilities are responsible for reviving some aspects of historic craft making in Russia. 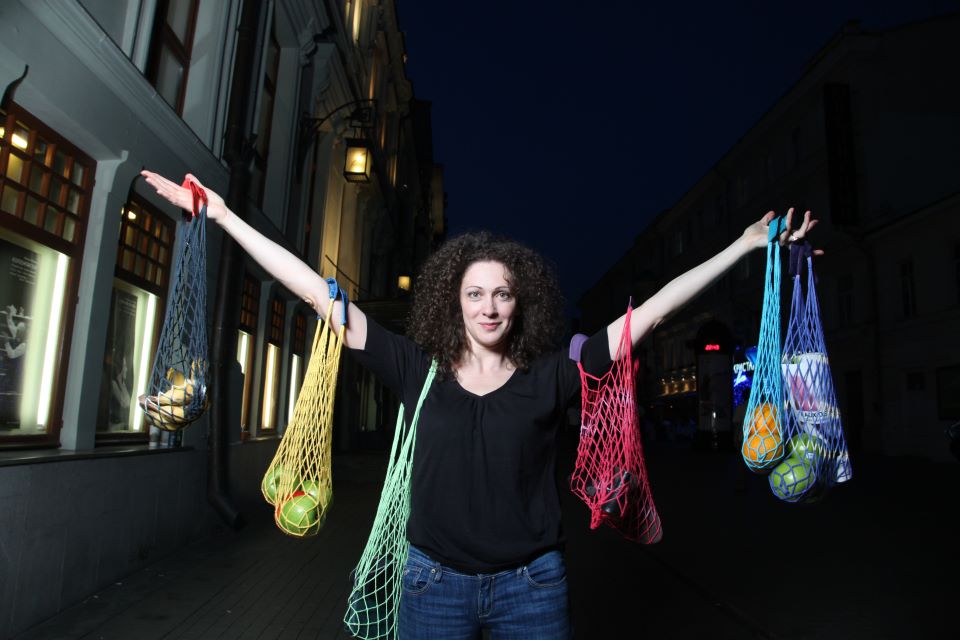 Weavers in the dark: Avoska gives hope to the blind

Such bags were popular in Soviet times: people used to go grocery shopping with them.

Who can help a disabled person find a job?

Since 1997 Perspektiva, a Russian non-governmental organization, has been advocating for the rights of disabled people in Russia and also has been assisting them in the job hunt: it organizes trainings, educational courses and secures internships in major companies such as Nestle, KPMG and Volvo.

"We are pioneers in this field [the recruitment of people with disabilities] and we’ve been doing this for 13 years now,” says Sofya Pak, a project coordinator at Perspektiva.

Pak says that it is now much easier for people with disabilities to find work compared to before.

"Large international businesses are reasonably favorable to the recruitment of such employees," says Pak. 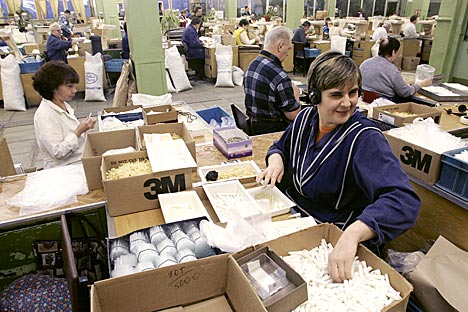 Four hundred and fifty eight people with disabilities seeking employment turned to Perspektiva in Moscow in 2015. However, among them only 154 people found work.

"Thirty or 40 percent successfully finding employment constitutes a normal figure for us,” says Pak. “We recommend to many [people that come to us] to study. For example, take English courses or agree to a part-time job."

Based on the list of vacancies published on the website of the organization, it is possible to get a job as a 3D designer working remotely with a salary of $1,200 or as an SMM-Manager also remotely with a salary of $500 during the probationary period. Additionally, there are often listings for cooks, client managers, programmers and administrators.

Unfortunately, there are not many openings for applicants that are both deaf and blind. When positions are available the salary is often much lower, usually about $150.

What prevents disabled people from finding a job?

According to Pak, the most common mistake among disabled job seekers is an unsuitable strategy of self-presentation.

"It's important that a candidate not focus on the disability and its difficulties, but instead talk about how they can compensate for it," Pak says.

For example, many blind people can work in Microsoft Office and the employer can even save money by hiring them, since such employees do not need a monitor and a desktop computer – they often have their own special equipment.

A lot depends on the personal desires of a disabled person. First of all, they need to be motivated to work, says Yulia Plenkova, head of the Social Integration program at the “So-edinenie”  (Connection) support fund that helps people who are both deaf and blind.

"Initially, less than 10 percent of deaf and blind people of working age that we interview want to work,” says Plenkova. “Quite often they don't see the need to work. It is easier for them to live on a pension or with help from relatives. Additionally, many do not believe that they can find a job.”