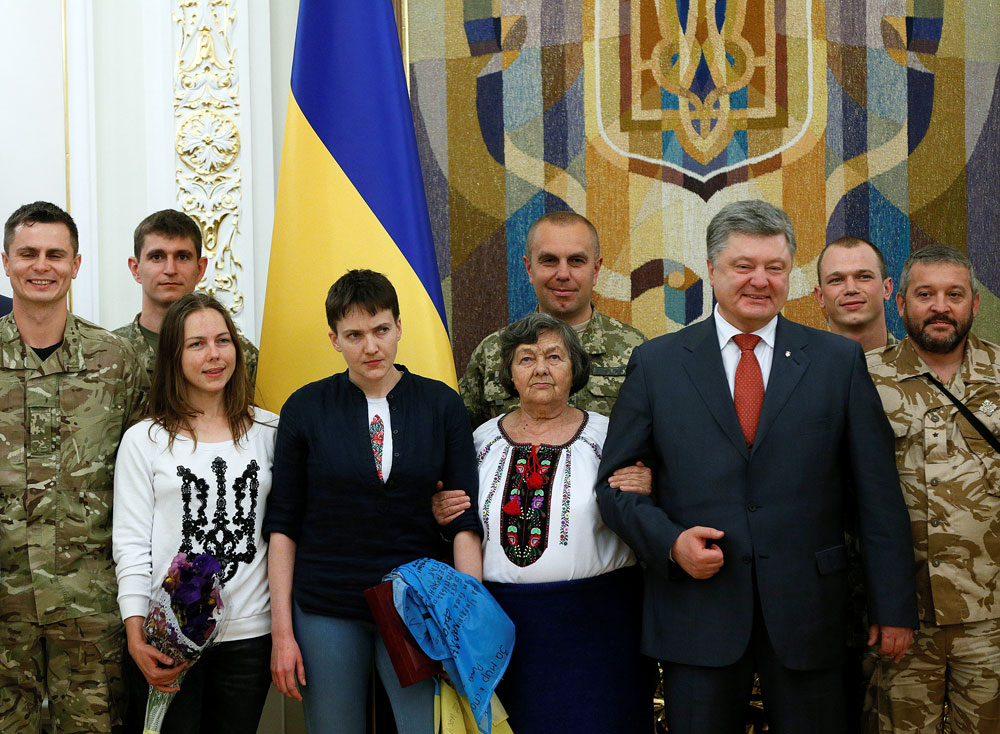 Ukrainian President Petro Poroshenko, Ukrainian servicewoman Nadiya Savchenko, her sister Vera, her mother Maria and her comrades pose for a picture at the Presidential Administration in Kiev, Ukraine, May 25, 2016.

Reuters
On May 25, the exchange that had been talked about for nearly a year finally took place – Ukrainian pilot Nadiya Savchenko was sent by a special flight to Ukraine, and two Russian citizens who participated in the armed conflict in the Donbass returned to Russia. Necessity, weakness or compromise? RBTH reports on the reaction to the swap in Russia.

The pardon issued to Ukrainian pilot Nadiya Savchenko and her exchange on May 25 for two Russians – Yevgeny Yerofeyev and Alexander Alexandrov, suspected servicemen captured in Ukraine – came as a surprise to the public, both in Russia and Ukraine.

From the morning until Savchenko's departure from Russia, her lawyers did not know anything about the planned operation, nor did her family.

However, it was difficult to imagine a better day for it – exactly two years ago, Petro Poroshenko took office as president of Ukraine, and he fervently vowed to secure the release of Savchenko, convicted in March for her alleged involvement in the deaths of two Russian journalists in eastern Ukraine in 2014.

"Just as we brought back Nadiya, so we will recover the Donbass and Crimea," Poroshenko promised at a joint news conference with Savchenko on May 25.

Flowers, a crowd of journalists, the leaders of the parliamentary factions, the prime minister – Savchenko was predictably greeted as a hero at home. However, there was also a sigh of relief from Russia.

‘The airport’s staff are in shock’

The Ukrainian presidential plane arrived in Rostov-on-Don (700 miles south of Moscow) to take First Lieutenant Savchenko. Ukrainian President Petro Poroshenko was not on board, however – he was waiting for her on her arrival at Kiev’s Boryspil airport, where the airliner landed.

The freed woman descended from the plane without shoes – she wanted to step onto native soil while barefoot.

"There is a big stir at the airport. Journalists are placing benches they have brought from the bus stop to see Savchenko. The airport's staff are in shock," a correspondent of the Ukrainian publication Strana reported.

Coming to reporters, Savchenko immediately asked them to "respect personal space" and move three meters away from her, "I spent two years in solitary confinement, I am not used to people, so I will be very harsh," she said.

This was followed by an emotional, if short speech, a victorious selfie in the presidential motorcade, a Hero of Ukraine award ceremony and a formal reception hosted by the president, where journalists had limited opportunities to talk to Savchenko.

"To prevent journalists from asking any questions to Nadiya Savchenko in the hallway on Bankova Street [Presidential Administration], they were locked for a few minutes in the hall for public celebrations. Simplicity is the key to success," Svyatoslav Khomenko of the Ukrainian BBC service reported.

"With the hysteria around Savchenko, it was somehow forgotten that two of our people returned to their homeland," wrote well-known Russian TV presenter Vladimir Solovyov on Twitter.

Many noted the contrast between the reception of the released prisoners. There was no excitement at Moscow's Vnukovo airport, where a car with diplomatic plates waited on the terminal's parking lot, and only wives and several federal channels were allowed to meet the former servicemen. The released prisoners did not make any statements, and media access was limited to several state-run TV channels.

"I do not know how it is at Boryspil. But here, at Vnukovo's special terminal, only Russia Today [RT], Channel One and NTV were allowed to meet the returning Yerofeyev and Alexandrov. But they were still not allowed to ask questions, just to shoot some silent footage," wrote journalist Pavel Kanygin of the liberal Novaya Gazeta newspaper.

Nationalist groups in Russia were unenthusiastic about the exchange. Some spoke of a sign of weakness, others spoke of a political mistake that had been made either then or now. But in general, the prevailing feeling was that of a sense of relief that this story has ended.

"Will this exchange influence the relationship between Russia and Ukraine? I doubt it. The Ukrainian side will try to reap the maximum anti-Russian propaganda benefits... But it was necessary to exchange Savchenko, it was a forced move, there was simply no other," Russian journalist Vladimir Pozner wrote on his website.

Kremlin comments on Poroshenko's intention 'to recover Donbass and Crimea'

Russian President Vladimir Putin insisted that the decision to release Savchenko had been dictated "above all, by considerations of humanity,” while the speaker of the upper house of parliament, Valentina Matviyenko, noted that this was "not an exchange," but the option of an international treaty.

"Russia and Ukraine have ratified the European Convention on the Transfer of Sentenced Persons and Convention on Serving Criminal Sentences Abroad," she said.

However, whether the exchange is seen as a weakness or a manifestation of diplomatic flexibility, the long story of Savchenko's case is still likely to leave an equally long aftertaste.

And if Moscow has finally got rid of an obvious "irritant", Ukraine has received a parliamentarian [Savchenko has had a mandate since 2014] with rather tough views.

"She will effectively become a detonator for many processes ... She will clearly be against the law on the elections in Donbass, it will be absolutely impossible to get it through in her presence, and it will become a problem for Petro Poroshenko," said Igor Popov, a deputy from Ukraine’s Radical Party.