Why some St. Petersburg residents refuse to abandon communal apartments 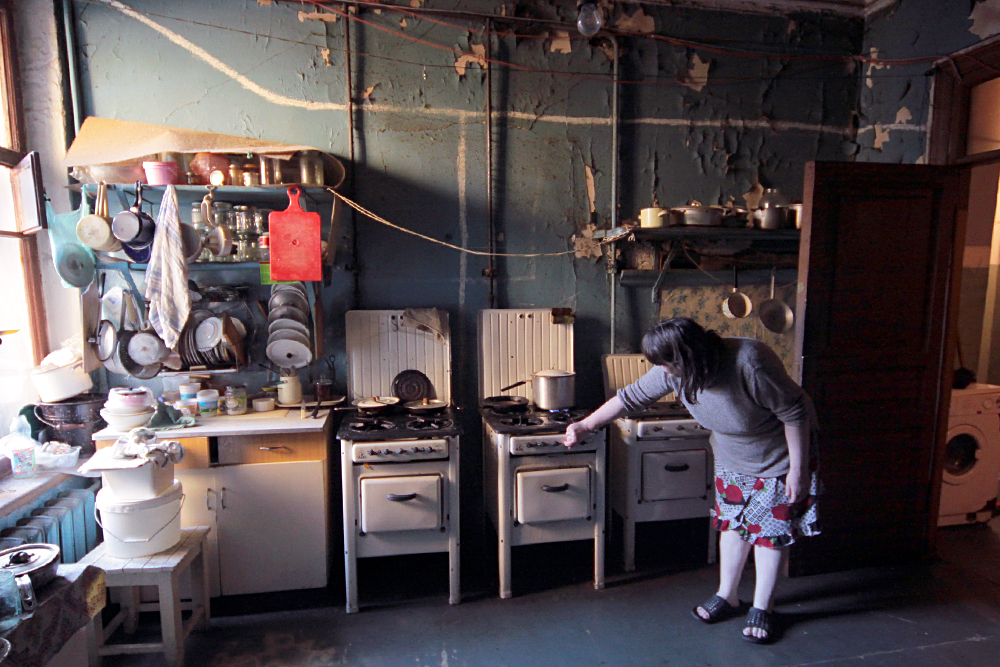 According to the City Housing Committee there are 259,653 families that currently live in communal apartments.

PhotoXPress
Sixteen years into the 21st century St. Petersburg remains Russia's communal apartment capital. According to official statistics the city still has about 82,000 of them. Despite the fact that they can be inhabited by up to 20 families simultaneously with one toilet per apartment and often without hot water, many people are reluctant to leave.

In the dark in a long and narrow corridor I am searching for the door, but instead I stumble upon a huge wardrobe. I need to get into one of the 10 rooms of the communal apartment in an old building on Rizhsky Prospect. It is inhabited by 27-year-old architect Vasya Paskachev and his 26-year-old wife Alina Belikina. They have promised to try to explain to me why completely normal people would want to live in a communal apartment.

After rummaging through the endless corridor, I finally surface in a bright room with high ceilings and breathe a sigh of relief. Vasya and Alina did the renovations themselves and their room is much brighter than other parts of the apartment. It is filled with plants and flowers and Vasya's architectural sketches. But despite the pleasant atmosphere, the couple is not particularly fond of communal apartments.

For this young couple the communal apartment is a sort of liminal phase between student dormitories and their own separate home. They have come to St. Petersburg from Karelia and intend to stay here. A room costs several times less than an apartment - you can afford one in the city center even without having a lot of money.

According to Vasya and Alina, one of the downsides to this type of housing is that despite the fact that most of their neighbors have children almost everyone smokes here. Another disadvantage is the unpredictability of your neighbors' behavior.

“One of the rooms down the corridor was rented out,” says Vasya. “When the old tenant was moving he left a cigarette butt behind that almost burned the placed down. We had to break down the door and put out the flames.”

Those who are unable to stand up for themselves will also find it difficult in communal apartments, since literally speaking, you have to “seize” your place in the sun.

“We don't have pantries, for example, since they were left for the old-timers, and we don't want to fight with anyone over them,” adds Alina. "This is despite the fact that we are owners and have the right to a pantry.”

There are more advantages than disadvantages

But regardless of all these difficulties, the young couple does not want to leave the communal apartment just yet.

"Do you know about the City Resettlement Program?” I ask them.

Through this program communal apartment residents can receive monetary compensation if they relocate to a private apartment. They acknowledge that they have heard about it, but say that the money for resettlement is not a lot – about $10,000.

“It is not enough to buy an apartment even on the periphery of the city,” says Alina. “There it costs at least two times that. It is better to pay off the loans for this room and later sell it and buy an apartment somewhere in a green suburb.”

In it together: How communal apartments shaped the outlook of generations

Indeed there is still a demand for rooms in communal apartments in the city center. There are always plenty of people that prefer life in the center – even under such crowded circumstances – to a separate apartment somewhere on the periphery where there is little infrastructure and nothing to do. The current demand usually comes from young people that don’t have the burden of large families and who can handle the practical inconveniences of “communal” life. However, there are also those who are completely satisfied with life in communal apartments.

“Our neighbor Petya has lived here for 30 years and he says he is used to everything and that he likes it,” says Vasya. “The people here are very sociable.”

They go on to mention that Petya is practically never sober and suggest that the sociability of this environment might be what keeps him alive.

Among the owners of rooms in the communal apartments there are those for whom this is pure business. Having invested a relatively small amount of money and having bought several rooms simultaneously, they rent them out to students or visitors and receive a decent income. This is exactly the situation with an apartment right in the center on Ligovsky Prospect near the Moskovsky Train Station. This neighborhood has nice bars and cafes, but the courtyards are not always so safe. The building number is 56. On the top floor I am greeted by 31-year-old Nastya Sokolova, who lives in the 14-room apartment.

“There's no hot water here,” says Nastya. “I must wash the dishes with cold water. The owner put a boiler in the shower rooms. I also don't have enough light. I'm an artist, but there are no lighting fixtures, so it's too dark for me to draw.”

She moved into the communal apartment because she did not want to leave the city center, even though with the money she pays for the room she could rent a small studio apartment on the outskirts of the city. Many of her neighbors are also young people who have moved to the big city from the provinces. Life in this apartment resembles more of a commune than a communal apartment. The tenants try to support each other and rarely get into conflicts. They do not even lock their doors at night.