Forget the vodka, here’s how to deal with stress in Russia 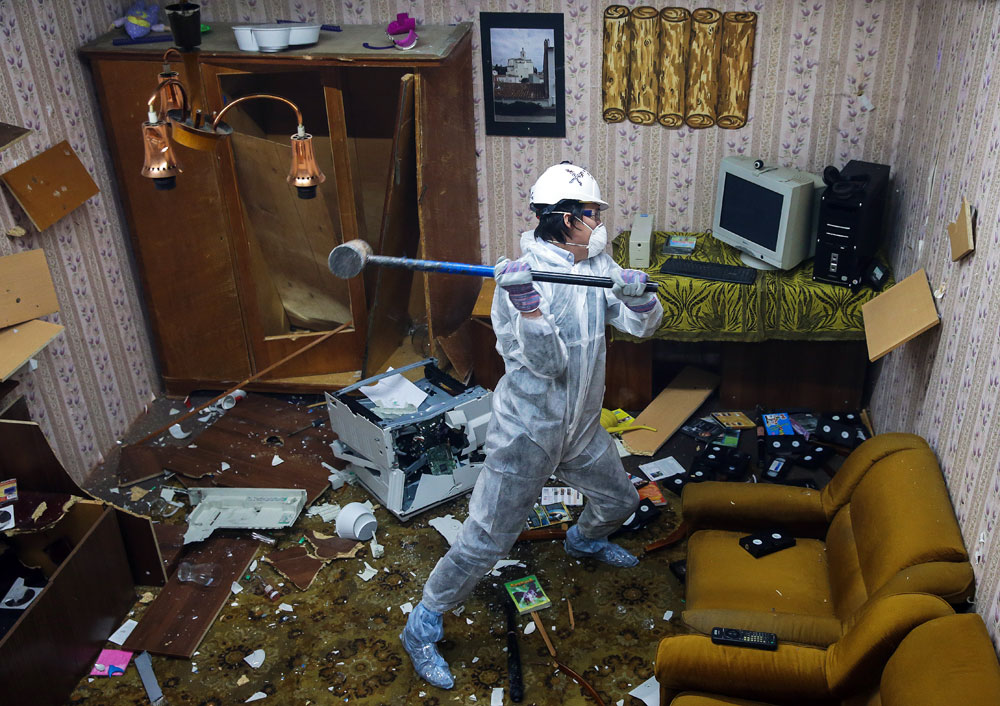 A man in a hard hat smashes household objects in a rage room. The Debauch stress relief service gives its customers an opportunity to smash the rage room up with sledgehammers and bats to relieve stress and tension.

Artyom Geodakyan / TASS
If you’re growing tired of life or feel like punching your boss, chances are it’s high time you attended a 'painting party' or smashed a flat or an office with a hammer – two ways of letting off steam that are becoming popular in Moscow and St. Petersburg.

According to a popular belief, Russians' preferred method of dealing with any problems or stressful situations is drinking vodka – a national pastime that remains fairly popular. Yet although love of vodka dies hard, Russians are increasingly developing more positive hobbies.

Over the past decade, activity clubs have mushroomed all across Russia, where enthusiasts spend their free time in a variety of hobbies, from aircraft modeling to rock-climbing, from free running to yoga. RBTH has selected two of the newest and most unusual forms of dealing with stress.

Over the past six months, a new form of pastime activity has been gaining popularity in Moscow and St. Petersburg. It is called Painty Party and it involves spending two hours with a brush in one hand and a glass of wine in the other and creating a painting to the accompaniment of good music and with guidance from a professional artist.

The Painty team has a set of themes for their painting parties, which also serve as subject matter for the paintings: "Hipster lion," "Can't take my eyes off you," "Baby, you are space itself.” A lot depends on the artist conducting the session.

"I was after professional young artists capable of capturing the audience and improvising," said Dmitry Anisimov, the founder of the Painty project.

Each session follows a set plan. It starts with introductions, followed by the first brushstrokes. After the first hour, there is a break. However, not all the guests take advantage of it: Many are so engrossed in their painting that they prefer to carry on without any interruptions.

“It’s not just a fun pastime but also art therapy. For many people a party like that is a way of forgetting their worries and spending some time with themselves,” said Anisimov.

After their painting is finished, the guests examine each others’ works, finish the wine and take a group self-portrait with their paintings and easels in the background. At the end of the evening, the inebriated amateur artists leave with a painting of their own, a complimentary apron with the company logo, prizes, photos and an improved emotional state.

Unlike Painty parties, the company called Debauch offers its customers a far from peaceful way of dealing with stress: smashing everything around them. Albeit on a limited scale.

A huge space is divided into a waiting area and rooms with different interiors – "Flat," "Office," "Post Office" (familiar to anyone who has spent hours waiting in a queue to pick up a parcel).

“Each of us has moments when you are so angry that all you want to is smash, break and crush everything around you. Yet the conventions of acceptable behavior do not allow us to do that in our everyday life. That is why bitterness, hurt and rage remain unexpressed and pent-up,” said one of the founders of Debauch, Alexei Barinsky.

“Once, when I was in just that state of mind, I thought how great it would be to have an opportunity to smash something without doing any real damage to anyone, like heaps of old rubbish in a garage or old furniture… I googled for a service like that in Moscow. Not finding anything, I decided I should probably implement this idea myself,” he said.

The two key ideas behind this project is to release the demolition urge inside a person and to help them relax, freeing them from restrictive rules of appropriate behavior and accumulated stress.

The choice of weapons available to Debauch clients is impressive: from hefty sledgehammers to bats, from hammers of various sizes to screwdrivers. After demolition by one client it takes just two hours to reassemble the rooms for the next one.

All the objects in the interior of the rooms come from Dumping Ground (Rus: “Svalka”), another of Alexei Barinsky’s projects. Dumping Ground is a service for collecting old things and a flea market at the same time. Some of the collected things – furniture, white goods, household appliances – are used in Debauch interiors, while others are sold, with 70 percent of proceeds donated to charity causes.

Barinsky and his team can create any customized interiors for their clients, e.g. an ex-girlfriend’s bedroom or the office of a bank the client has a grudge against.

One of Debauch clients once admitted that his life-long dream was to break a heap of crockery. Especially for him, the team put up a pyramid of glasses and suspended an old TV set above it. The client was given a pair of scissors as his weapon.

“The guy looked very surprised but he agreed to step into the room. I cannot tell you the expression on his face, when he saw that pyramid of glass, the TV set and felt the scissors in his hand,” smiled Barinsky.

Read more: ‘Art for booze’ – St. Petersburg artists give away paintings for drinks>>>