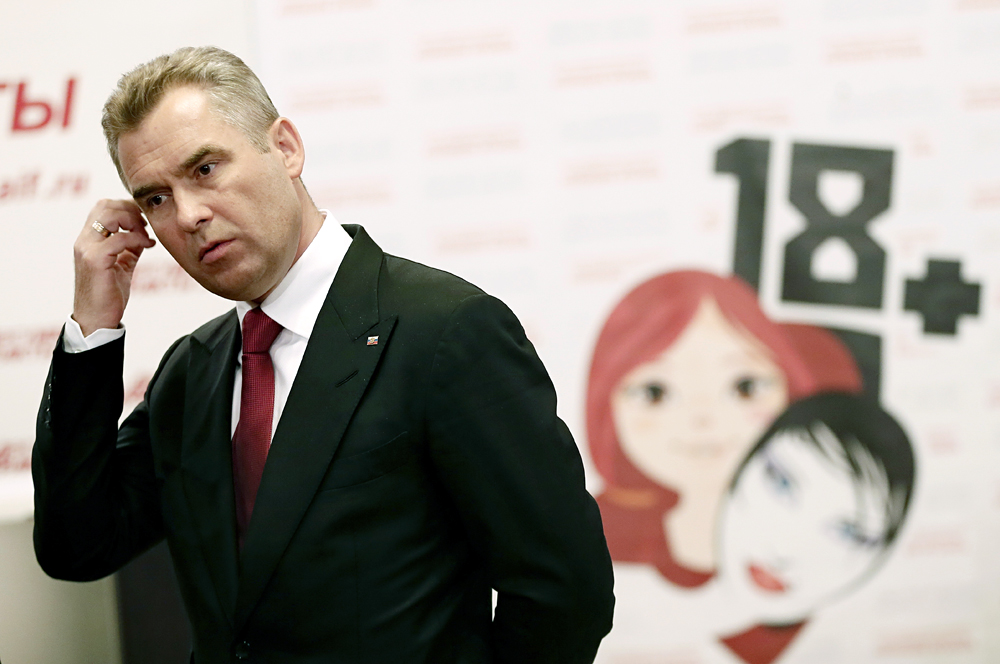 Pavel Astakhov will be remembered for his frequent gaffes, the latest of which outraged hundreds of thousands of Russians.

Zurab Dzhavahadze/TASS
Pavel Astakhov, whose tactless and cynical comments made him deeply unpopular with many Russians and who came to international prominence for supporting the law banning foreigners from adopting Russian children, is to leave his post.

Pavel Astakhov, who has gained notoriety abroad for his active support of the law banning foreigners from adopting Russian children, is to step down. As children’s rights ombudsman, Astakhov will be remembered for his frequent gaffes, the latest of which outraged hundreds of thousands of Russians.

The faux pas, which became the last straw and caused widespread outrage, occurred during Astakhov’s meeting with survivors of a deadly boating accident on Lake Syamozero in Karelia, north of St. Petersburg, in which 14 children were killed.

Having come to visit the survivors in hospital, he greeted the children, who had been through a terrible ordeal, with a smile and a question: “Well then, how was your swim?”

This mixture of callousness and cynicism coming from a person whose job it is not only to understand children’s problems but also to be able to find a common language with them and protect their interests disqualifies Astakhov from the post, his critics insist.

A petition asking Russian President Vladimir Putin to dismiss Astakhov appeared on the Change.org website on June 24 and collected over 150,000 signatures in a week. A source close to the Kremlin told the Vedomosti newspaper that it was strongly suggested to Astakhov that he should resign and this is what he did.

The news of the children’s rights ombudsman’s imminent departure has been confirmed by presidential press secretary Dmitry Peskov, who said that the president will sign a decree relieving Astakhov of his post when the latter returns from leave.

According to Valery Solovei, a political analyst and professor at Moscow State Institute of International Relations, Astakhov’s embarrassing statements have made him “a major irritant for public opinion in Russia.”

“In the run-up to the elections, when the [ruling] United Russia party has a very low rating, it is not in the authorities’ interest, so they will be getting rid of everyone who is dragging them down, and Astakhov is an ideal candidate,” said Solovei.

There is no-one, he continues, who would speak up for Astakhov: “He does not have extensive connections in the Kremlin. His is a figure that does not, in fact, have much influence, though he does receive a lot of publicity.”

In his time as children’s rights ombudsman, Astakhov has more than once scandalized the public with his cynical remarks, widely at odds with the nature of his job. Below are some of the more striking examples.

In 2015, commenting on a wedding between a 17-year-old girl and a 47-year-old district police chief in Chechnya, Astakhov said that it was normal because women in the Caucasus age faster: “There are places where women are already shriveled by the age of 27, and look about 50 to us,” he said.

In April 2016, he made a callous comment in response to the news that a 13-year-old girl in Barnaul had been mauled by a tiger (according to Astakhov, the girl had been teasing the tiger): “Stupidity and hooliganism! The Darwin Awards [a tongue-in-cheek honor “presented” every year to those who contribute to the improvement of the human gene pool by being killed in the most stupid and reckless fashion] are weeping!”

In 2014, speaking about the prospects of introducing sex education classes for schoolchildren, Astakhov, known for his conservative views, said: “I am asked when we [in Russia] will introduce sex education. I reply: never.”

In Astakhov’s opinion, children should learn all they need to know about sex from Russian literature.

Astakhov has not been particularly receptive to criticism. In 2013, he explained that it was pedophiles who were seeking his resignation. Having learnt about the petition for his dismissal on Change.org, he said that it had been signed exclusively by bots and Ukrainians (the administration of the website denied this).

Advocate of the ‘scoundrels’ law’

Astakhov was one of the staunchest supporters of the so-called “Dima Yakovlev Law” passed by the State Duma in December 2012, banning U.S. citizens from adopting Russian children. The law was named after a Russian toddler who died in the U.S. through the negligence of his adoptive father.

The Russian opposition was extremely critical of the Dima Yakovlev Law, dubbing it the “scoundrels’ law.” Its critics pointed out that the bill affected children from orphanages who were deprived of an opportunity to find a family, albeit abroad.

Astakhov, however, supported the law, saying that he was opposed to foreign adoptions in principle: “It is humiliating for our country and puts it on a par with third-world countries,” the ombudsman said, adding that the law should have been adopted earlier.