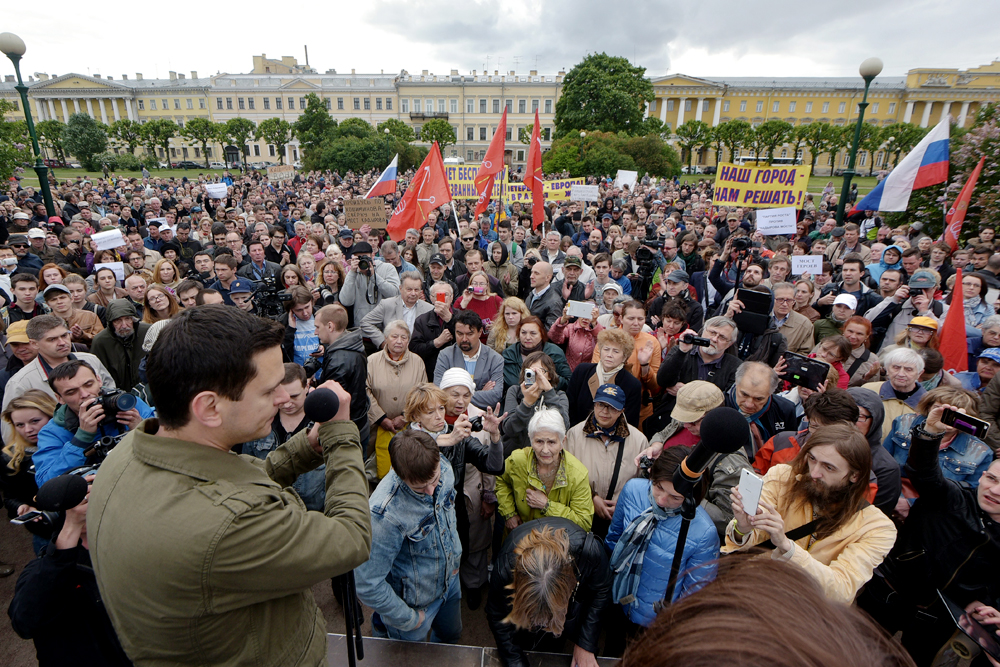 Kadyrov’s call in the mid-1990s for Chechen guerillas to kill as "many Russians as you can" are still remembered by many. Photo: People protest in St. Petersburg against the naming of a bridge after the first president of Chechnya.

Kommersant
The controversy which erupted in St. Petersburg over the naming of a bridge after the first president of Chechnya shows that the authorities' attempts to publically recognize the Chechens as an integral part of Russian society are often carried out in an insensitive and heavy-handed manner.

In mid-June, Russia’s Toponymic Commission named an anonymous bridge over the Dudergofsky Canal in the southwestern outskirts of St. Petersburg in honor of the late first president of Chechnya, Akhmad Kadyrov, the father of the current president of the republic, Ramzan Kadyrov.

The city's Cultural Committee explained that in such a way the residents St. Petersburg "extend a hand of peace" to the Chechen people.

"St. Petersburg is part of Russia, the country's second city," Andrei Kibitov, the spokesman for the St. Petersburg governor, said. "And Russia remembers and honors all its heroes, and does not divide them by ethnicity."

However, on hearing of the decision, indignant citizens shared their discontent on social networks and took to rallies. As it turned out, they had not even been asked for their opinion: The “hand of peace” was extended to the Chechen people not by St. Petersburg’s residents, but only by the city officials.

The residents of St. Petersburg, known for their sensitivity toward their hometown and their own culture, did not appreciate this “inclusive” impulse by their authorities. Questions were asked at the rally: What does Kadyrov have to do with St. Petersburg and why was the bridge named after him and not one of the city’s many cultural or scientific figures?

Graffiti near the Kadyrov Bridge in St. Petersburg depicting Yuri Budanov, a Russian military officer who was shot dead in Moscow after serving a sentence for kidnapping and murder in Chechnya. Source: Kommersant.

Akhmad Kadyrov, who during the First Chechen War (1994-1996) fought in the ranks of the separatists against Russian forces and supported the self-proclaimed state of Ichkeria (part of the virtual state of the Caucasus Emirate, which appeared at the same time and is now banned in the Russia as a terrorist organization – RBTH), still provokes mixed feelings among a large part of Russian society.

Kadyrov’s call in the mid-1990s for Chechen guerillas to kill as "many Russians as you can" are still remembered by many, and many of the posters and banners posted on the bridge by protesters on the third day after the new name was assigned featured these infamous words.

In 1998, during the Second Chechen War, Kadyrov, however, sided with the federal troops and began surrendering towns and villages to them. In 2003, he was elected president of the Chechen Republic and in 2004 he was blown up by terrorists at a stadium (he was awarded the title of Hero of Russia posthumously by a presidential decree).

In Chechnya, his name was subsequently given to the central streets of major cities and regional centers, the main street in the capital Grozny, a garden, a park, a mosque, courts, a gymnasium, a sports arena and even a cargo ship. A street in Moscow has also been named after Kadyrov.

Such attention is paid to the person of Kadyrov Snr. partly because he has become something of a symbol of the new statehood of Chechnya, which for some time was a de facto independent entity at war with the Kremlin, but which eventually submitted after Russian federal troops took control of the republic in July 2000.

Not everyone is happy about this situation, both in the North Caucasus and within Russian society, and the existing unity is rather fragile. Because of this, the current federal authorities face a difficult task.

On the one hand, they must demonstrate to the Chechens that they are accepted and respected in Russia, but at the same time, the authorities should contain discontent among Russia's non-Caucasian population about the unruly behavior of the Chechens (for instance, shooting and racing in Moscow or the desire to set their own rules in Stavropol) and the fact that Chechnya is a heavily subsidized region, which eats up a significant portion of Russia's budget.

The uproar that erupted around the St. Petersburg bridge shows that the authorities made an obvious mistake by handing down a decision to name it after Kadyrov.

While Moscow, which attracts huge numbers of migrant workers from republics and regions around Russia, is relatively ethnically diverse and indifferent to what its peripheral streets are called, St. Petersburg is very possessive about each stone of its cultural and historical heritage.

And the resistance against the Kadyrov bridge has attracted a wide range of disgruntled people under its banner – from nationalists advocating the separation of the North Caucasus from Russia to ordinary St. Petersburg residents outraged at the authorities' arbitrariness.

"You as a citizen are not paid any attention, you are an empty space," the renowned film director Alexander Sokurov wrote in an open letter to the authorities.

"This event also caused a backlash from the citizens who are loyal to the authorities and the Chechens," said Mikhail Remizov, the president of the National Strategy Institute. "It showed the leadership's disrespect to the citizens. This is an obviously imposed decision."

No sense of proportion

The events surrounding the naming of the bridge also channeled the deep tension and discontent that exists in Russian society toward the North Caucasus.

Over the last few months, media reports covered an attack on a bus full of Russian and foreign journalists, Ramzan Kadyrov's call to try all opposition activists for "subversive activities," conflicts with human rights activists and federal security forces, as well as the news about the transfer of control of the local oil industry to Chechnya (for which separatists and Akhmad Kadyrov himself once fought) and Ramzan Kadyrov's complaints about a shortage of federal money.

All this provided a negative background for the authorities' heavy-handed step to promote the image of Chechnya.

"Perhaps this promotion is necessary; many efforts in this regard, by the way, are quite successful," said Remizov. "But this example had an opposite effect. It is about the lack of a sense of proportion in promoting the interests of the Chechen Republic in the public space."

Read more: Russia’s strict new anti-terror laws: What is the debate about?