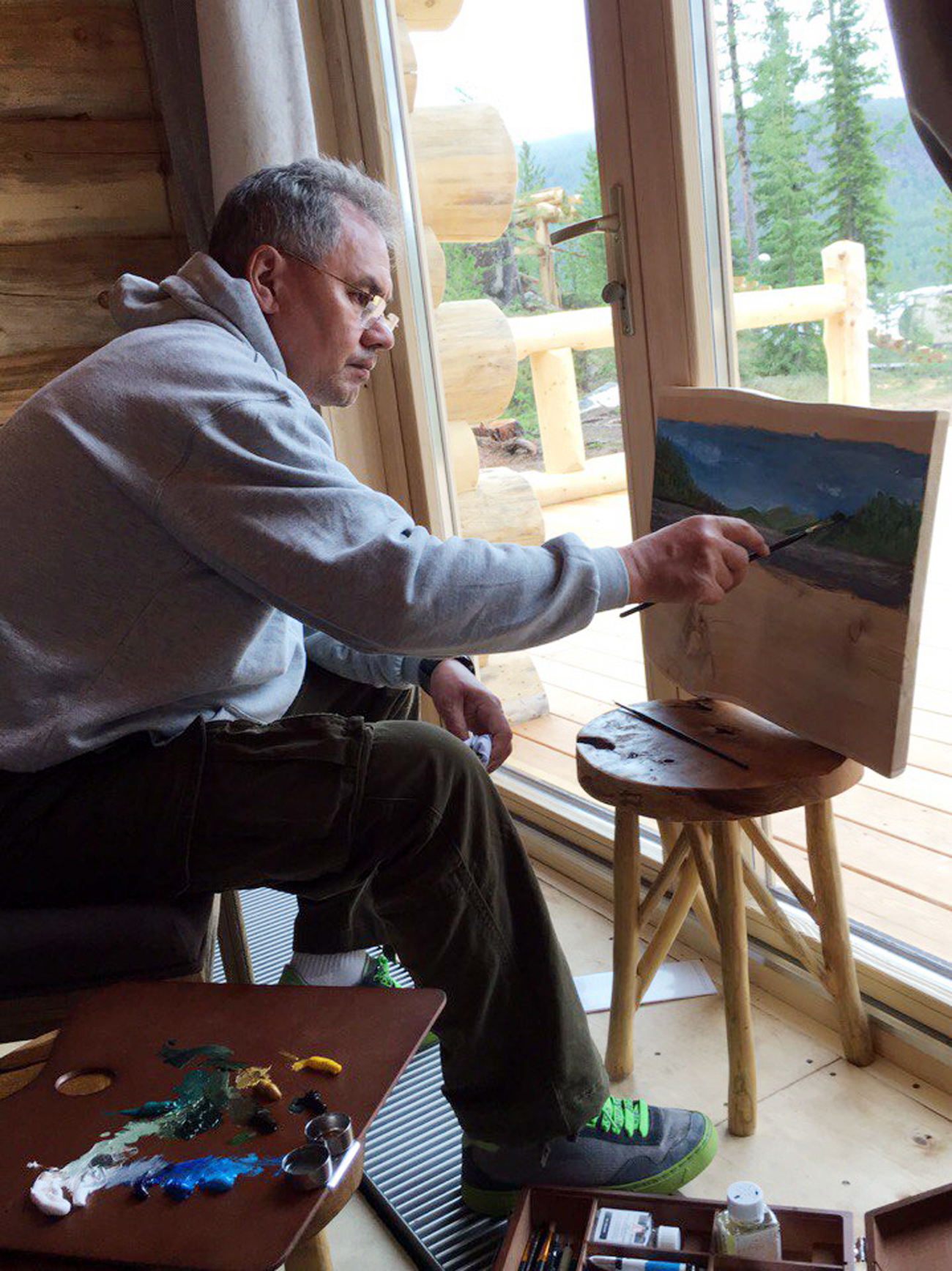 Sholban Kara-ool, the chairman of the government of the Tuva Republic, recently posted photos on his social media account of Shoygu painting local landscapes in the town of Chadan.

“How talented some great men are,” wrote Kara-ool. “My superior spending a rare moment of free time in his hometown. July 2016, Tuva.”

The Defense Minister paints watercolors and enjoys sitting behind the easel in his time away from work. Besides painting, Shoygu also enjoys carving wooden sculptures, one of which was displayed at an exhibition called Provincial Russia in the village of Cherkizovo in fall 2012. He also plays football, rides horses, hunts and collects weapons. There are a number of items of historical value in Shoygu’s collection, including a ceremonial dagger from 1860 awarded “for bravery.”

As a sports lover, Putin enjoys hockey and skiing, but the president’s greatest passion is for martial arts. He started practicing sambo and judo at age 11. Now he is not only a master in both, but he is also the honorary president of the European Judo Union. Moreover, in 2010 he received an honorary doctorate in the field of judo from Yong In University in South Korea. In an interview with Chinese media on June 24, 2016, Putin told of how judo helps him in a in his life.

“Judo teaches you how to maintain your composure, to sense the importance of the moment, to find where the strong and weak points of your opponent lie, to strive to achieve the best possible outcome,” he told reporters. “It isn’t hard to see how all of that knowledge, that know-how and those skills are necessary in politics too.”

Lavrov is also a fan of whitewater sports. Between 2007 and 2009 he held the title of head of the International Rafting Federation in Russia. The minister has long professed his love of watersports: as a student at the Moscow State Institute of International Affairs (MGIMO) he would often go out on the river with friends in rafts and catamarans. Once a year during his holidays he tries to conquer mountain streams. The waters of the Altai region hold the greatest appeal for him.

“I often spend a few days’ holiday in the mountains of the Altai, which helps to put my mind at ease,” Lavrov told the Altai Star newspaper in January 2015.

Besides rafting, the minister likes to play guitar and write poetry. When working in New York in 1996, he wrote a poem dedicated to an expedition in the Altai Mountains by river, foot and horseback that he had been on with former classmates from university. The diplomat also composed the official song of MGIMO in 1999, which has remained unchanged since then.

Medvedev has been interested in photography since his days as a Pioneer, the Soviet Union’s equivalent of the Boy Scouts. However, he only took it up seriously “at a more mature age, probably after the age of 30,” as he has said.

“I like photographing landscapes, architecture, and, of course, people,” says Medvedev. “Although, to be quite honest, I have a fairly hard time photographing people, because in light of my work it would look a bit odd if I decided to run off with a camera and start taking pictures of someone. I fear that people just wouldn’t get what I was trying to do.”

Medvedev posts his photos on Instagram where he has more than two million followers. The Prime Minister also took part in a photography exhibition called The World Through Russian Eyes in 2010, and one of his works was once sold at an auction in St. Petersburg for 51 million rubles ($772,000).

Surkov writes poetry, music and plays the guitar according to TASS news agency. Vadim Samoylov, a former member of the rock group Agata Kristi, a hugely popular band in Russia in the 1990s, also spoke of Surkov’s great love for poetry in an interview with Ksenia Sobchak on her show on the Dozhd television channel. Samoylov shared the story of how he developed a “creative friendship” with the famous politician, which resulted in the release of two albums based on Surkov’s poetry: Poluostrov (Peninsula, 2003) and Poluostrov 2 (2006).

Irina Khakamada, politician, member of the Council of the Party of Growth

Irina Khakamada is a former deputy of the State Duma (1993-2003), the former joint president of the Union of Right Forces (1999-2003) and was a candidate for president of the Russian Federation in the 2004 elections. In her free time, Khakamada, whose father is from Japan, enjoys calligraphy. She has said that she believes there is no better way to take your mind off work than to do something with your own hands.

“It seems to me that when you are working with your hands, your consciousness switches itself off, which really does allow you to regain your composure,” she says.

Calculators, forks and big bells: 5 of Russia’s most unusual collections>>>