What is Russia’s ruling party doing to boost its rating, pre-elections? 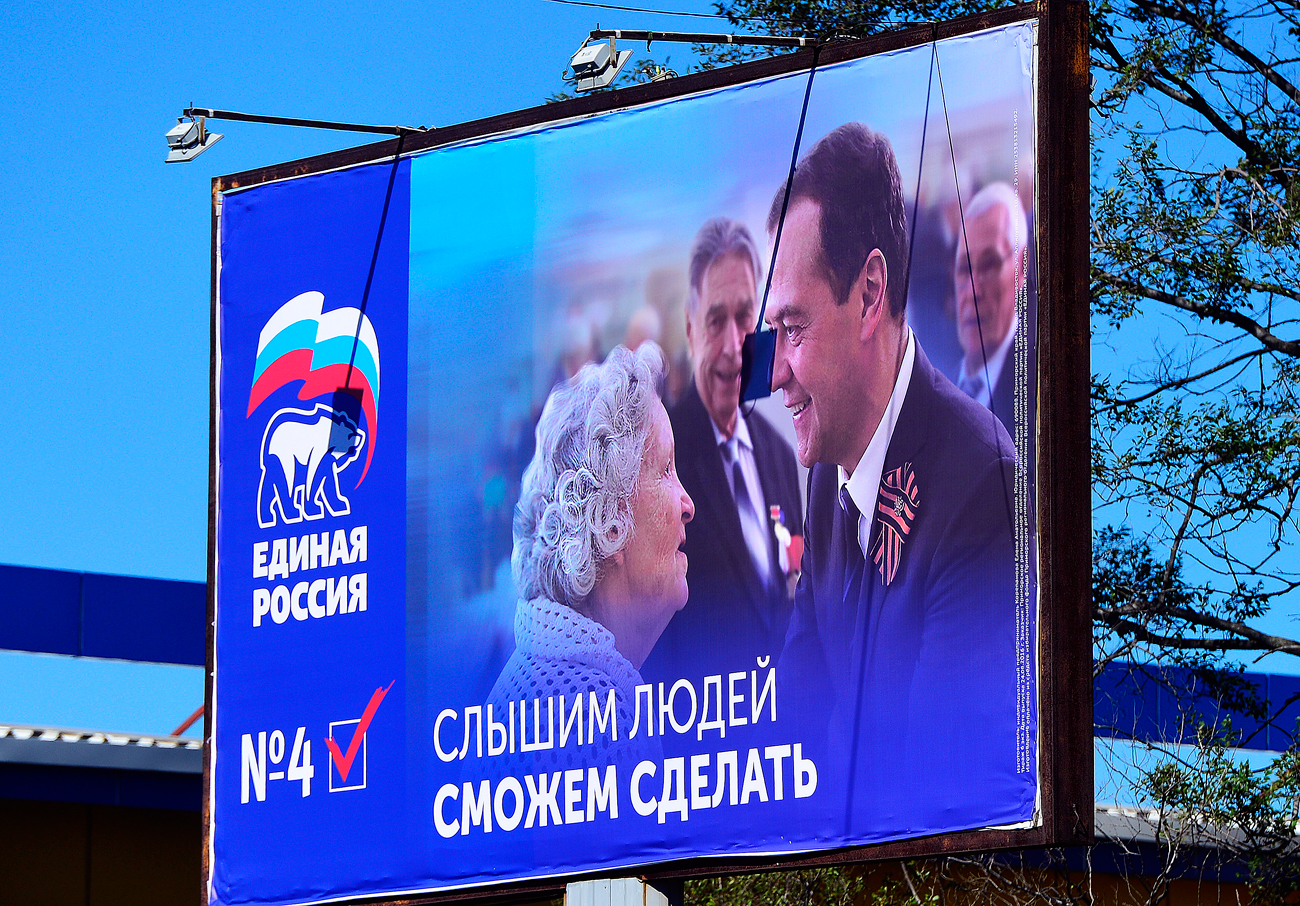 United Russia headed by Prime Minister Dmitry Medvedev intends to regain a comfortable majority in parliament. But the ongoing economic crisis in Russia makes this a difficult challenge.

Yuri Smityuk/TASS
According to opinion polls, public attitudes toward the United Russia party are far from encouraging ahead of the parliamentary elections on Sept. 18. What is the party doing to address this worrying trend?

Opinion polls show that the popularity rating of Russia’s ruling party United Russia is falling. However, experts believe that the party of power is still able to win the parliamentary elections on Sept. 18, primarily due to the support of the president.

United Russia, which positions itself as the ruling party loyal to Russian President Vladimir Putin, has been in power since 2003, throughout three consecutive convocations of the State Duma. Now the party, which is headed by Prime Minister Dmitry Medvedev, intends to regain a comfortable majority in parliament. But the ongoing economic crisis in Russia makes this a difficult challenge.

The price of power

In August, a survey by the independent pollster Levada Center showed (in Russian) a reduction in United Russia’s rating – only 31 percent of respondents expressed willingness to vote for the party in the parliamentary elections if they were to be held the next weekend. This was the lowest result since the beginning of 2016. Analysts attribute the decline in United Russia’s popularity to the socio-economic crisis in Russia.

The crisis is a difficult issue for the ruling party, since it is the authorities that people blame for the deterioration in standards of living, says Leonid Polyakov, a professor of the Department of Political Science at the Higher School of Economics in Moscow.

"This is natural, this happens in any country," Polyakov told RBTH. "All political arrows fly into the party of power."

Valery Solovei, a political analyst and professor at the Moscow State Institute of International Relations, agrees. According to him, the public’s actual attitude to United Russia has deteriorated even in comparison with 2011, when the party's victory in parliamentary elections was followed by mass protests and accusations of fraud.

“In some regions, the social situation is tense, and it is United Russia that is blamed for this," said Solovei.

According to analysts, in the past few months, the authorities have tried to raise United Russia’s rating by getting rid of problematic and unpopular officials associated with the government. Solovei cites as an example the recent dismissal of Education Minister Dmitry Livanov (Aug. 19) and children's ombudsman Pavel Astakhov (Sept. 9). Livanov is remembered for his reform of the Academy of Sciences, which was unpopular in the scientific community, and Astakhov for his scandalous and tactless statements.

Solovei believes that in the run-up to the election, the Kremlin decided to get rid of “ballast” that could pull down the ratings of the government and United Russia, which is associated with it.

A chance in single-seat constituencies

The introduction of a mixed system in the 2016 elections, where half of the lawmakers (225 out of 450) are elected in single-seat constituencies also plays into the hands of United Russia, experts believe, as it allows candidates who are loyal to the government to stand in the elections not for the party, but allegedly for themselves.

"You can use single-seat constituencies to bring candidates who are loyal to the government and only technically call themselves independent into [the State Duma], without causing severe irritation,” Solovei told RBTH.

At the same time, he noted, United Russia may experience difficulties in the constituencies with strong candidates from other parties, who are supported by local elites. According to Solovei's estimates, a fierce struggle is possible in about 50-60 out of 225 constituencies.

Putin as savior and the weakness of competitors

According to him, the image of Putin is quite sufficient to bring United Russia victory on Sept. 18. This would appear to be confirmed by an increase in the party’s rating after Putin held a meeting on Sept. 6 with its representatives – United Russia's rating rose (in Russian) from 39 to 41 percent.

The lack of strong rivals also plays into the hands of United Russia. Judging by polls (in Russian) carried out by sociological organisations, the ratings of non-parliamentary parties do not exceed 1 percent.

At the same time, the three parliamentary parties – the Communist Party, the Liberal Democratic Party and A Just Russia – are going through some tough times. "They look the same and cannot position themselves favorably," Alexei Makarkin, vice president of the Center for Political Technologies, was quoted (in Russian) by Gazeta.ru as saying.