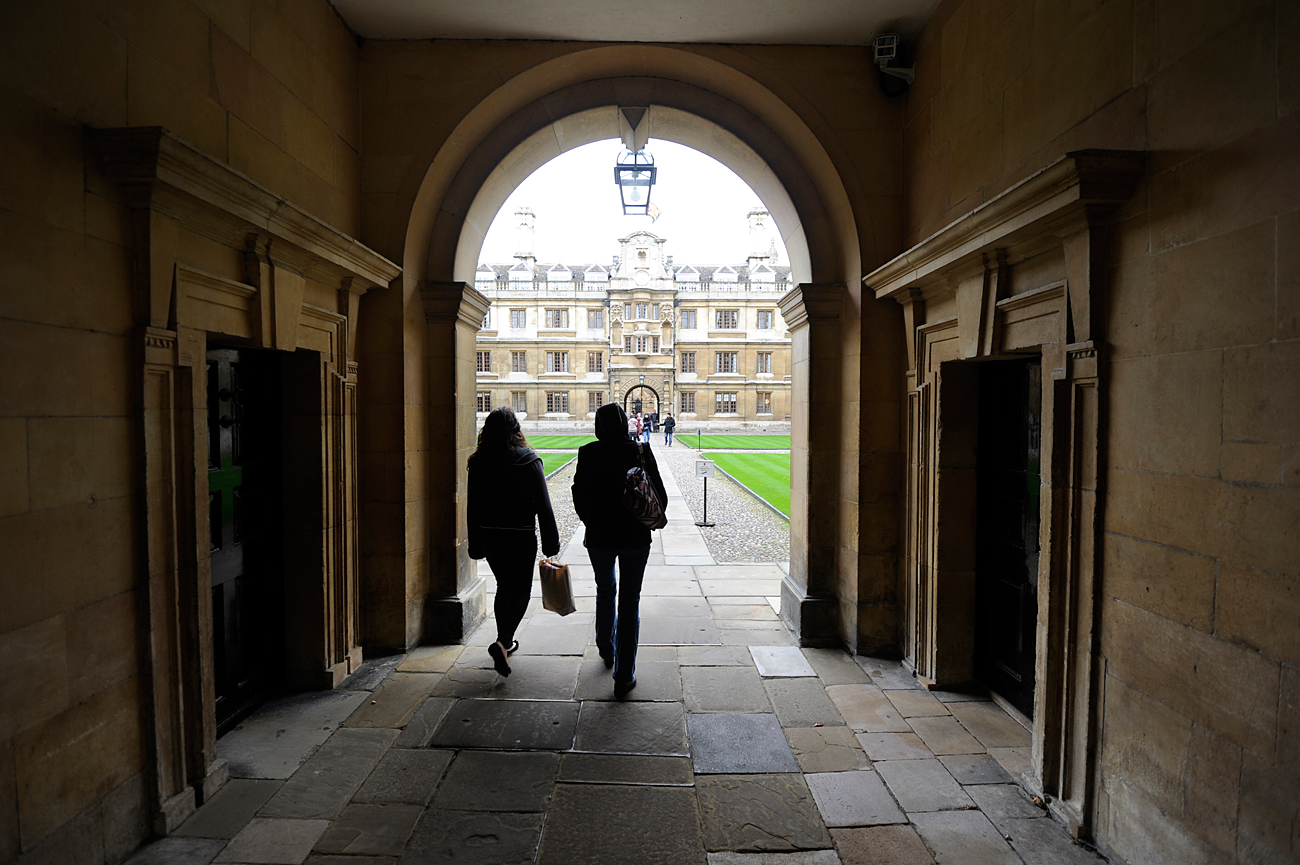 The subject of a ban on overseas education for the children of Russian officials is not new. In 2012, the Russian State Duma discussed a bill that would have obliged the children of Russian civil servants to study in Russia. Photo: People walk into the quadrant of Clare College at Cambridge University in eastern England on Oct. 23, 2010.

Reuters
Amid growing tensions between Russia and the West, Russian media have reported that the children of officials who are living abroad will soon have to return to Russia.

The Russian presidential administration has recommended that Russian officials and parliamentary deputies repatriate any of their children who are studying at foreign universities, as well as any parents who live abroad but are Russian citizens.

According to information (in Russian) obtained by the Russian website Znak.com from anonymous government sources, officials with children studying abroad must return them to the country immediately by transferring them to Russian universities.

"Those who do not comply with this tacit request on time will be reminded of the already familiar cases when the presence of immediate relatives of the younger or the older generation abroad proved to be a complicating factor in a subsequent career in the public sector," the website reported, citing sources in the administration.

The Kremlin, however, did not confirm this information, with presidential spokesman Dmitry Peskov saying (in Russian) that he had heard nothing about any such order.

The ‘nationalization of the elites’

However, in 2013, officials were banned from having bank accounts abroad, and in 2014, due to the sharp deterioration in relations with the West, there was talk about a ban on ownership of foreign real estate.

"[Russia] embarked on a course of the so-called nationalization of the elites," political analyst Mikhail Komin told RBTH. "A clear directive was given to transfer all savings and property from foreign countries to Russia, a sort of 'return of capital.'"

However, most politicians responded to this signal in a nominal way. Foreign assets was reregistered in the names of spouses, children, other relatives, or were transferred to legal and semi-legal offshore funds".

The issue of banning officials from sending their children to study abroad was raised again in 2015. In an interview (in Russian) with the Izvestiya newspaper, United Russia deputy Shamsail Saraliyev explained the need for this measure as follows.

"They (the children of officials) can easily find themselves in the sights of Western intelligence agencies, they can become hostages of terrorists, be subject to recruitment," said Saraliyev, adding that "those who receive education abroad form a completely different worldview."

According to Komin, the current recommendation is in line with the political course that has been pursued by the Kremlin since 2014.

Who preferred to educate their children in the West?

Precise data on how many children of Russian officials are studying abroad is unavailable. A number of media outlets focus not on the total numbers, but on the positions occupied by prominent parents.

The Svoboda Slova ("Freedom of Speech") website provides the following examples: Foreign Minister Sergei Lavrov's daughter Yekaterina was studying in the United States (now she is living in Russia); the three daughters of the State Duma's Deputy Speaker Sergei Zheleznyak are studying in the West – in Switzerland and Britain; the children and grandchildren of the former head of Russian Railways, Vladimir Yakunin, are also living in Britain and Switzerland; the son of Yelena Mizulina, chairman of the State Duma Committee for family, women and children, is living in the United States.

The son of former Children's Rights Ombudsman Pavel Astakhov, who at one time advocated a ban on the adoption of Russian children by foreigners, is also studying abroad. The daughter of the above-mentioned Kremlin spokesman Peskov, Liza, is at university in France.

Will they come back?

Mikhail Komin says that it is unreasonable to expect that all of the above relatives of senior officials to return to Russia in one day.

However, according to the expert, there are many more minor officials whose close relatives are living abroad, and the brunt of this recommendation will fall on them: They will have to make a choice – to pursue a career in the civil service, or change their sphere of activity.

"What's important is how the elite will use this instrument," said Komin. "I think this is one of the ways to rotate some officials and relieve social elevators."