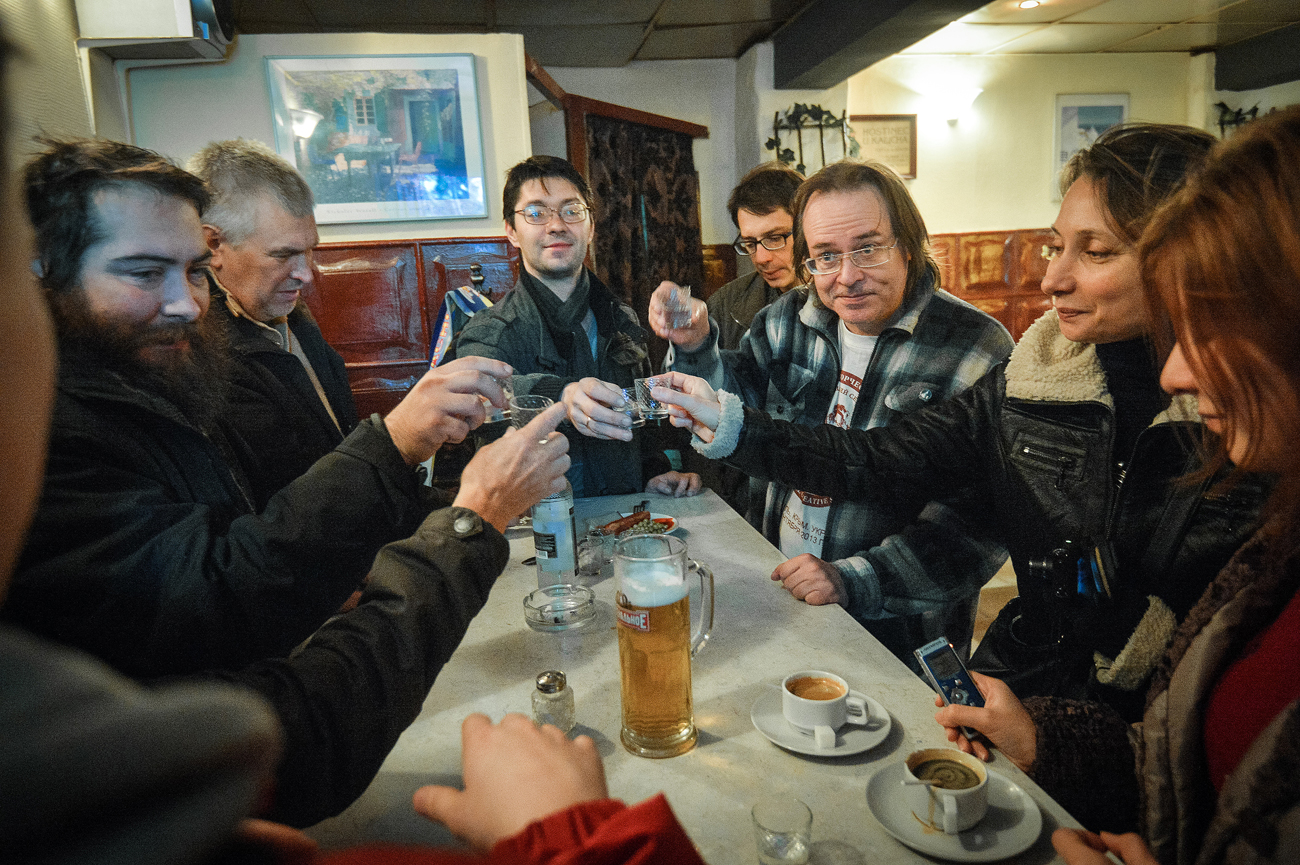 Visitors at the bar "Aist" (Stork) on Lubyansky Proyezd in Moscow.

Alexey Kudenko / RIA Novosti
As the crisis continues, Russians are not only eating less, but they are also drinking less – as far as vodka and other hard liquors go. Against the background of an overall decline in alcohol consumption, Russians' preferences are shifting toward beer and wine. And this trend will continue over the next decade if the population does not fall too far into poverty.

The volume of retail trade turnover in Russia continues to decrease. In August, it fell by 0.1 percent compared to the previous month, while by January-August of last year, it fell by 5.7 per cent, say experts from the Russian Presidential Academy of National Economy and Public Administration (RANEPA), citing data from the state statistical agency Rosstat and a survey conducted by the Institute for Social Analysis and Forecasting.

Turnover is decreasing because the Russians are not only eating less and cutting back on spending on services, but they are also drinking less alcoholic beverages.

In January-August 2016, vodka, liqueurs and brandies accounted for 42 percent of sales volume. Beer amounted to 44-45 percent of total sales of alcohol to the population. Another 12-13 percent was wine production.

Other beverages (cider, mead, etc.) made up less than 1 percent of alcohol products, acquired by the population, according to RANEPA's monitoring data.

The range of sales is clearly seasonal. In December, retailers usually sell more wine, champagne and vodka. Sales of beer, on the other hand, increase by 15-20 percent by mid-summer compared with the beginning of the year.

"Retail sales of alcohol to the population have significantly decreased over the past two years, 10.6 percent fewer alcoholic beverages were sold in January-August of this year than during the same eight months of 2014," read the report on the survey.

Retail sales of alcoholic beverages bottomed out in January and April 2016.

"Sales of vodka dropped catastrophically," Alexandra Burdyak, a senior researcher at RANEPA and one of the authors of the study, said. "The drop was 13.4 percent against the same period of last year. The main decline occurred last year, when sales of vodka decreased by 12.6 percent compared to 2014."

However, the wine production sector showed a different trend. The traditional New Year increase in sales of wine and champagne dragged on, with wine sales remaining at 2015 levels until May 2016.

According to Burdyak, consumers first finished their previously stored wine, and then, as stocks in cabinets dried out and lovers of wine and sparkling wines made sure that nothing washappening in the economy, the ruble was not strengthening and the prices of imported alcohol were not decreasing, they began to buy these types of alcohol again.

The new generation of consumers

According to Burdyak, the decrease in the consumption of vodka and other alcoholic beverages has been steady since 2013. Strong alcohol consumption peaked in 2007, and it has been in decline since then.

The tastes of the Russians who were born in 1985 and later were shaped under the influence of Western, primarily European trends; they prefer wine, beer and other light alcoholic beverages.

However, Vadim Drobiz, director of the Center for Federal and Regional Alcohol Market Studies (TSIFRRA), believes that it is a little early to talk about a reduction in alcohol consumption in Russia.

"Because of the crisis, the main consumers of alcoholic drinks could have switched to cheaper options, this is possible," he said. "But few people are capable of seriously saving on alcohol."

Drinking away the crisis

Vodka consumption fell from 53 percent of retail sales measured in terms of absolute alcohol content in 2007-2009 to 39 percent in 2015. During the same period, the share of beer increased from 31-32 percent to 43 percent of total sales of alcoholic beverages to the population.

These trends seem set to continue in the next few years, experts say, though some have reservations.

"It should be borne in mind that consumers, and the Russians certainly in my experience, consider strong alcohol to be an antidepressant," Drobiz said. "And that means that consumption of vodka and other spirits in the context of the ongoing economic crisis is not likely to fall."