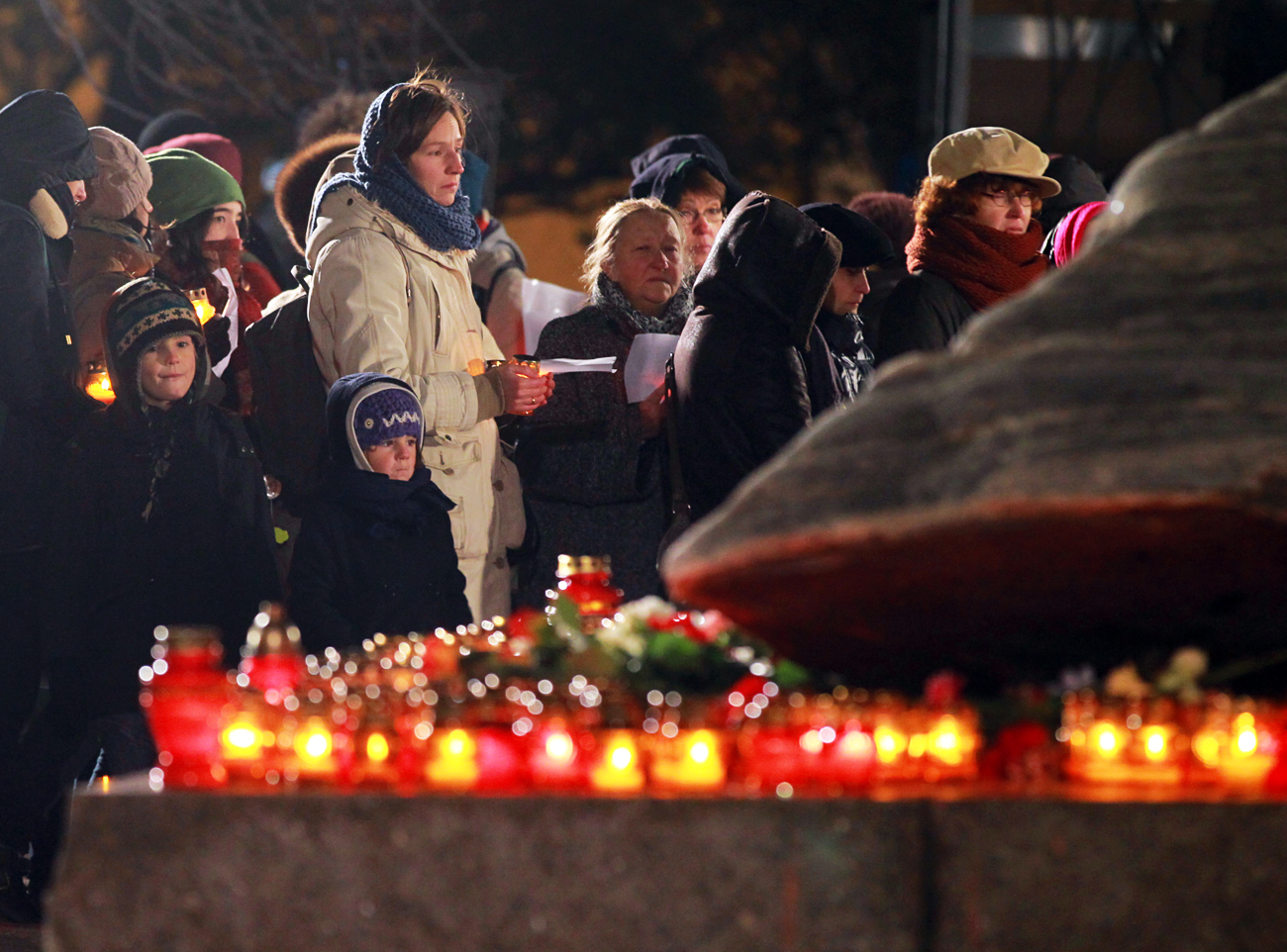 People in the Return of Names action stand in the queue on the rostrum at the Solovetsky Stone on Lubyanka Square in Moscow. The event is held each year on the eve of the Day of Remembrance of the Victims of Political Repression, at which anyone can read lists with names of victims in the Great Purge of 1937-1938.

Vitaliy Belousov/RIA Novosti
Every year on Oct. 29, Moscow residents line up for the microphone for hours to take part in "The Return of the Names," a memorial event to honor the victims of Stalin's repressions.

Name, surname, age, profession, date of execution. And again – name, surname ... People read this data into a microphone in the center of Moscow for 12 hours.

"The Return of the Names" civil campaign has taken place every year on Oct. 29 for the past 10 years, with people reading out the names of those secretly shot during the Stalinist repression between the late 1920s and early 1950s.

The Investigator: Murder and paranoia mix in Stalinist Ukraine

In such a way, Russians are trying to preserve the memory of thousands of Soviet engineers, doctors, teachers and workers who were taken from their apartments and never heard from again.

"The totalitarian state did not just kill people – it sought to erase their names from the history, destroying all memory of them," says a representative for the organizers, the Memorial International Society. "The return of the names, the return of the memory of those besmirched and killed is the negation of the dictatorship, this is our step to freedom."

The list contains more than 40,000 names, but participants have managed to read out only half over the years. Every year, on the eve of Day of the Victims of Political Repressions, people gather near the Solovetsky Stone (Russia’s principal monument to these victims) on Moscow’s Lubyanka Square, in front of the main symbol of repression – the state security building, which now houses the headquarters of the Federal Security Service (FSB). People line up for the microphone for two to four hours to read out a few names into it.

‘The most meaningful line in the world’

More people attended this year’s event than a year ago. They stood for a long time in silence, then read out the names given by the organizers for a few minutes and left, to come back next year and continue reading.

Participants braved temperatures of around zero degrees Celsius to read out names from the list, with one calling the line for the microphone "the most meaningful line in the world."

"In the queue for #vozvrascheniyeimen [The Return of the Names], a pregnant woman said on the phone that either she reaches the Stone or she’ll give birth right here," wrote Marina Dedales, a participant, on Facebook. "The names and dates of execution sound the scariest when said in children's voices."

Another participant, Mikhail Danilov, recalled how he had traveled with his parents as a child to a boarding house near Shcherbinki (a city district near Moscow). "We went <...> to swim in a small lake," he wrote on Facebook. "And we did not know that a few hundred meters from there, at the Butovo shooting range, there were covered ditches with tens of thousands of those who were shot."

The relevance of the Gulag

According to participant Yekaterina Mamontova, more and more people are coming to the Solovetsky Stone “because of the increased pressure, because of the return of monuments to the tyrant [Joseph Stalin], because of the justification of his crimes by ‘efficient economy.’”

"But we need not look far," she wrote on her Facebook page on Oct. 29. "I saw the need to go there right now just last year. For this is not just a memorial and mournful event, this is an expression of civil protest against the rehabilitation of Stalin."

In the end, everyone who goes to Lyubyanka Square believes that without massive public repentance for the crimes of the Soviet regime, Russia can have no future.

And for someone, a line in Memorial's lists is the only thing that has left of their great-grandfathers. "In 2014, I came to the Return of the Names on October 29 for the first time," wrote Igor Kononkov, who attended a same similar event in London on Oct. 29. "On my way there, I read Memorial's lists and found my great-grandfather Nikolai there. ... And I do not know how to turn him from a line into a person."