Russian pensioners campaign to save forest from felling in Karelia 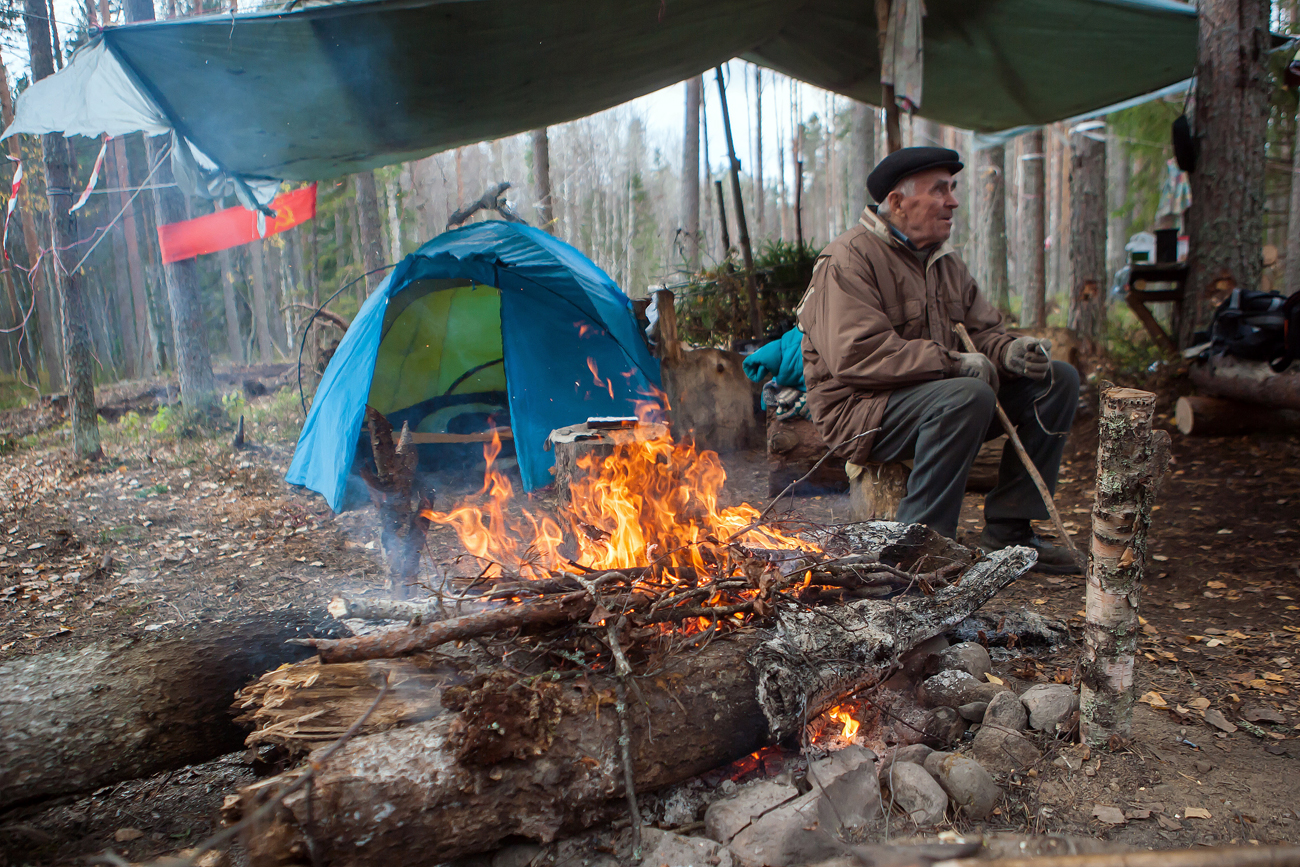 Vasily Diykov, a defender of the Suna forest in Kondopozhsky District. Elderly people from the village of Suna have set up a camp to defend the forest from being cut out by the Saturn Nordstroy company. The company is to start excavating a sand and gravel pit in the Suna forest; this can lead to forest destruction, as well as extinction of Lobaria pulmonaria, a seriously endangered species of lichen

Igor Podgorny / TASS
For over four months already, pensioners from a small village in Karelia have been taking turns to live in a tent in a local forest. Their aim is to prevent logging vehicles from felling the forest that their livelihood depends on. The protesters have become known as the Suna Partisans.

Elderly people from the village of Suna have set up a camp to defend the forest from being cut out by the Saturn Nordstroy company. The company is to start excavating a sand and gravel pit in the Suna forest; this can lead to forest destruction, as well as extinction of Lobaria pulmonaria, a seriously endangered species of lichen. Photo: Vasily Diykov, a defender of the Suna forest in Kondopozhsky District. Source: Igor Podgorny/TASS

The remote village of Suna (492 miles north of Moscow) in the northern region of Karelia is populated mainly by elderly people. There are no jobs in the village. In the summer, the wooden houses standing on the river bank become home to vacationing city residents, but by October most of them are deserted. The only houses that are looked after all year around are those where the elderly local residents live.

Some time ago, Suna pensioners came up against a serious problem: The forest where they pick mushrooms, berries and medicinal herbs came under threat. In the summer, a company called Saturn Nordstroi began to fell the forest for a quarry mining project. The pensioners rose up to protect their woodland, setting up a camp where they take turns to be on duty every day.

Defenders of the forest

The camp consists of a large yellow tent and a table with some food and teabags lying on it. There is a fire that is kept burning all the time, with a blackened kettle on it. The weather is becoming colder with each passing day. The protesters have been camping here for more than four months already, taking turns to man the site.

There are at least two activists at the camp at any given time: They say it would be “unsafe” to stay there alone. There are many who present a danger in the forest apart from the loggers: There are bears, elks, and wolves roaming around. The Suna Partisans carry a whistle – it may come in handy if they need to startle a bear.

Protesters say that in order to prevent the felling of the forest, they had to throw themselves under the logging vehicles. Photo: A participant of a protest against the felling of Sung boron during the crossing of the lake. Source: Kommersant

Pensioner Tatyana Romakhina is in her 60s. Her reason for protecting the forest is very simple: “We need to survive somehow,” she says.

“Here we pick mushrooms, blueberry and lingonberry. If we are no longer able to do this, we shall have to buy all those things. On what? On our meager pensions of 5,000 rubles a month? We have spent our lives paying taxes, but now nobody needs us anymore.”

The forest defenders object to the project for which the forest is to be cut down, described as an investment. The partisans maintain that the director of the company behind the project, Igor Fedotov, has promised not to hire any local residents.

“This is not investment. We may be aborigines, but we are no fools,” says Romakhina. “They will come, plunder all the resources, leave an empty hole and go. Well, last time we looked, the mineral and other resources in this country still belonged to the people.”

“This will bring no benefit to local residents,” says Darya Kalikina, an activist from Petrozavodsk. Having heard about the protest, Kalikina set up an online petition against the mining of a sand and gravel quarry and decided to attract volunteers for the camp, since “she felt sorry for the old people.” This led to about a dozen volunteers joining the project.

Protesters say that in order to prevent the felling of the forest, they had to throw themselves under the logging vehicles. Once, the machines were single-handedly stopped by a lone pensioner, Nina Petrovna, and her dog, who was the first at the scene and called the others. So far, according to Romakhina, there have been four “attacks.”

When the conflict was reported by the media, the felling was suspended. The logging vehicles have indeed been removed, with only a strong smell of diesel oil and an abandoned worker’s uniform remaining at the site. However, the protesters are not convinced that felling will not resume the moment they leave their camp, so they continue to guard it.

The forest defenders object to the project for which the forest is to be cut down, described as an investment. The partisans maintain that the director of the company behind the project, Igor Fedotov, has promised not to hire any local residents. Source: Kommersant

“Last time they came on Oct. 7,” says Romakhina. “One of our elderly guards fell ill, and immediately they were here. And prior to that there was a lull, I think because of the elections. I can’t think of any other explanation. However, a week after the election [on Sep. 18], people from the Saturn company appeared and started tying ribbons to the trees. Well, so much for the moratorium!”

One of the most active defenders of the Suna forest, Vasily Diykov, will soon be turning 80. “I have been going to this forest since 1959,” he says. “The same time I met my girlfriend. I used to hunt and sell furs: marten, mink. These are wonderful places, rich in berries and mushrooms.”

Tent camp ‘no way to resolve a conflict’

The press service of the governor of Karelia, Alexander Khudilainen, insists that “the conflict should be resolved exclusively through legal means.”

“This dispute has two truths. On the one hand, there is the tenant who has all the licenses, permissions, a court ruling. On the other, there are local residents who are actively opposed to the quarry mining. A tent camp is no way to resolve a conflict. What is needed is a dialogue and a search for a compromise,” said the press service.

The director of Saturn Nordstroi, Igor Fedotov, says that he has “all the supporting documents for mining the quarry, all the permissions, everything, including the lease, the license and the other papers.” The company received a license back in 2011 for a period until 2031. However, Fedotov promises that all the work will be completed in a matter of two years, after which the land housing the quarry "will be reclaimed.”

Fedotov sees himself as a hostage to the situation and hopes that it will be possible to reach an agreement with the protesters, including through holding roundtable discussions. He is encouraged by the fact that at the second roundtable, all the participants stayed till the end instead of storming out.

By way of a compromise, the businessman has promised to render assistance to the nearby villages of Yanishpola and Suna: to supply them with sand and gravel mix to repair local roads, and to assist them with rubbish removal. Source: Igor Podgorny/TASS

“From the legal point of view, I have not violated anything, but I have been unable to move forward,” he said. “I have paid 1.7 million rubles for the logging work but the contractor has not been able to start it. I have promised that the work will not start until the dispute has been resolved. No matter what is being said about me, we are trying not to stir a conflict but to resolve the problem amicably.”

By way of a compromise, the businessman has promised to render assistance to the nearby villages of Yanishpola and Suna: to supply them with sand and gravel mix to repair local roads, and to assist them with rubbish removal.

“To young people I am offering not mushrooms and berries but a good monthly pay, starting from 35,000,” he said. “Of course, I shall not be hiring pensioners. I need young people aged between 20 and 40, preferably machinery operators. I also need guards, but not from among the elderly.”

As for the pensioners, Fedotov’s offer to them is to “make decent roads” because he “does not think that in their advanced years they are so keen to go picking mushrooms and berries.”

In the meantime, the elderly protesters are stocking up on logs in order to continue their vigil in the forest, which will be very cold in the winter.

This is an abridged version of an article first published in Russian in the Kommersant Vlast magazine.

Read more: Village people: The rural past that unites Russia and Finland​>>>