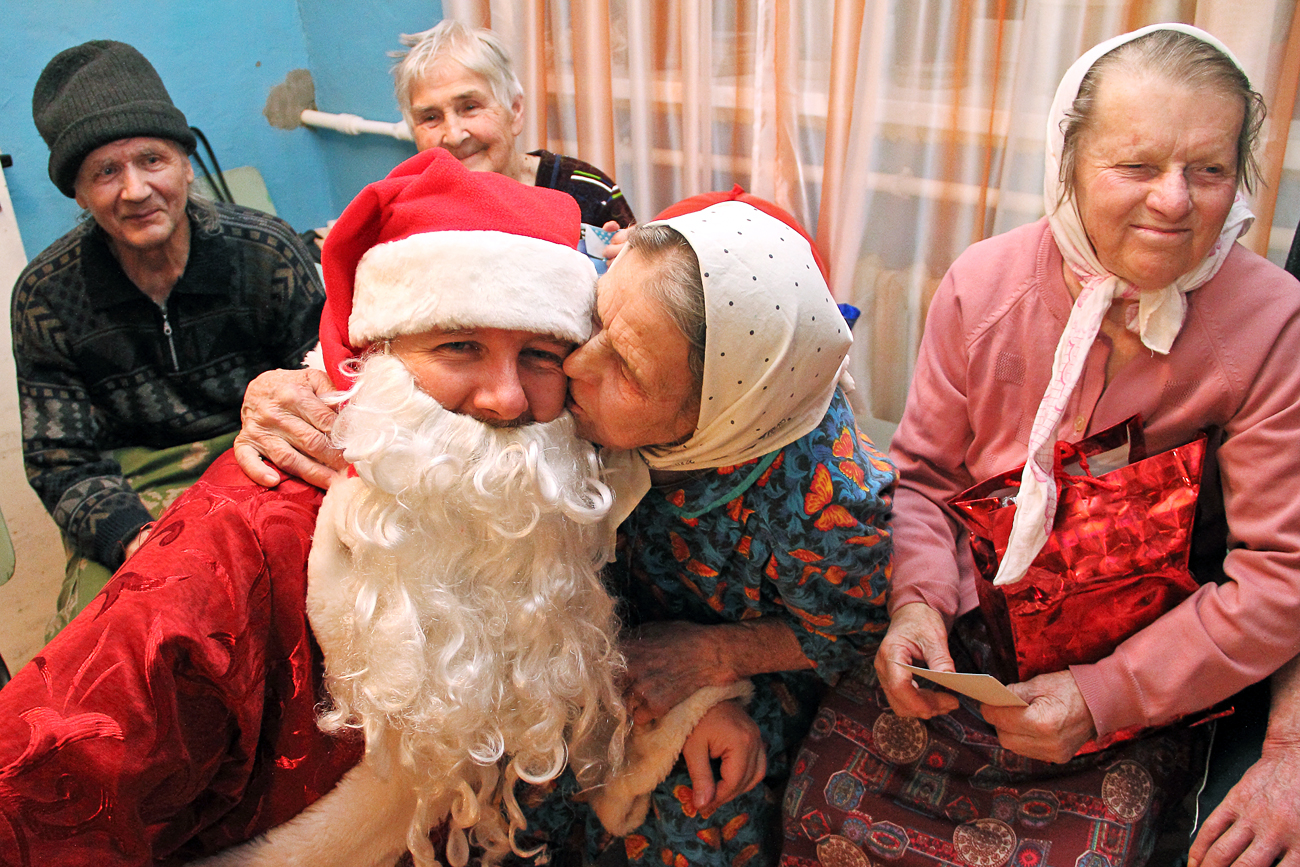 The foundation collects gifts for the holidays, uses donations to buy medicine and basic commodities, organizes creative and craft workshops and repairs the premises.

Press Photo
Right before every New Year volunteers from the Starost v Radost foundation for invalids and the elderly try to make miracles. They not only have to collect and deliver gifts to old people in nursing homes but also find 10,000 people who would like to donate to the foundation in the course of the following year.

There are many lonely old people in Russia, but until recently there were practically no charity organizations that could take care of them. Starost v Radost (“Old Age is Happiness”) is a fortunate exception. For 10 years the foundation has been making the lives of old people in nursing homes brighter. Today practically everyone working in the social sphere knows about it, since the foundation works with 150 nursing homes in 25 of Russia's regions.

Today more than 5,000 old people around the country receive letters from so-called "grandsons" and "granddaughters” – and it was through such correspondence that Alexandra Kuzmicheva, who currently manages the foundation's social pages and site, first became involved with the organization.

It all began in 2006 when Moscow State University philology student Yelizaveta Oleskina went on a folklore expedition to Russia's northwest. Looking inside a rural nursing home, where she could hear many folk songs, Oleskina was shocked to see how useless and lonely the old people felt there. On her return she started organizing trips to the nursing homes, which led to the formation of a volunteer movement that in 2011 transformed into a foundation.

The volunteers quickly understood that first of all, they could help the old people by simply engaging them in human interaction. Afterwards, they began organizing concerts at the nursing homes, planning trips and tea parties. But since it was not always possible to visit the old folks, the volunteers launched one of the foundation's main projects – "Pen-pal grandchildren."

"She entered my heart. She replied to all my letters,” said Alexandra Kuzmicheva, recalling a grandmother whom she met after the correspondence. “She always wrote about the same thing, in the same manner: about the past, her daughters, her gratitude to the attendants. She was most appreciative about the fact that no one yelled at her. This moved me because she could only hear when people screamed at the top of their lungs."

Obviously, material support is essential. The foundation collects gifts for the holidays, uses donations to buy medicine and basic commodities, organizes creative and craft workshops and repairs the premises.

Oleskina, who is now the foundation's director, notes that the nursing homes' material support and their internal order depends to a great extent on the regions and their administrations.

"In some regions the grandparents can live in a facility with a pool and a health bar, in other neighboring regions, even in the best of homes, you'll be struck by a horrible odor, you'll see old people lying in their beds, staring indifferently at the ceiling."

Putting the human being at the center of the social system

But even the most difficult cases can be overcome. It is not by hearsay that the foundation's employees know how care and participation can help transform a sick, bedridden old person. That is why most of the donations – 3 million rubles ($47,000) monthly – go towards the salaries of specially trained attendants and recreation activity organizers.

Of course, the 1,500 nursing homes in Russia have their own staff. But often one attendant must take care of 20 or even 30 old people and cannot physically manage to give them the attention they need.

Oleskina says that the problem is with Russia's modern social system, for which the focus is not the living human being, but rather the ward, the department, the norms. The attendants employed by the foundation have a concrete task: look after the old people, socialize with them, keep them autonomous for as long as possible or restore their ability to take care of themselves.

Waiting for a New Year's miracle

Today the foundation's biggest problem is the financial issue. Oleskina has high expectations for the New Year marathon, in which the foundation will try to find 10,000 people throughout Russia to make a certain monthly donation for the whole year. This will help the attendants continue their work and the foundation will be encouraged to realize new projects.

The foundation has already made agreements with certain regions about making care for the elderly a priority in 2017. This includes staff training, introducing minimal service standards and providing home assistance for those elderly people who are still capable of taking care of themselves. There are also plans to make interactivity with old people's relatives more intensive and prepare psychologists for each home the foundation works with.

Read more: How to survive winter being homeless in Moscow>>>