Frenchman cleans up after Russians; what's Communism got to do with it? 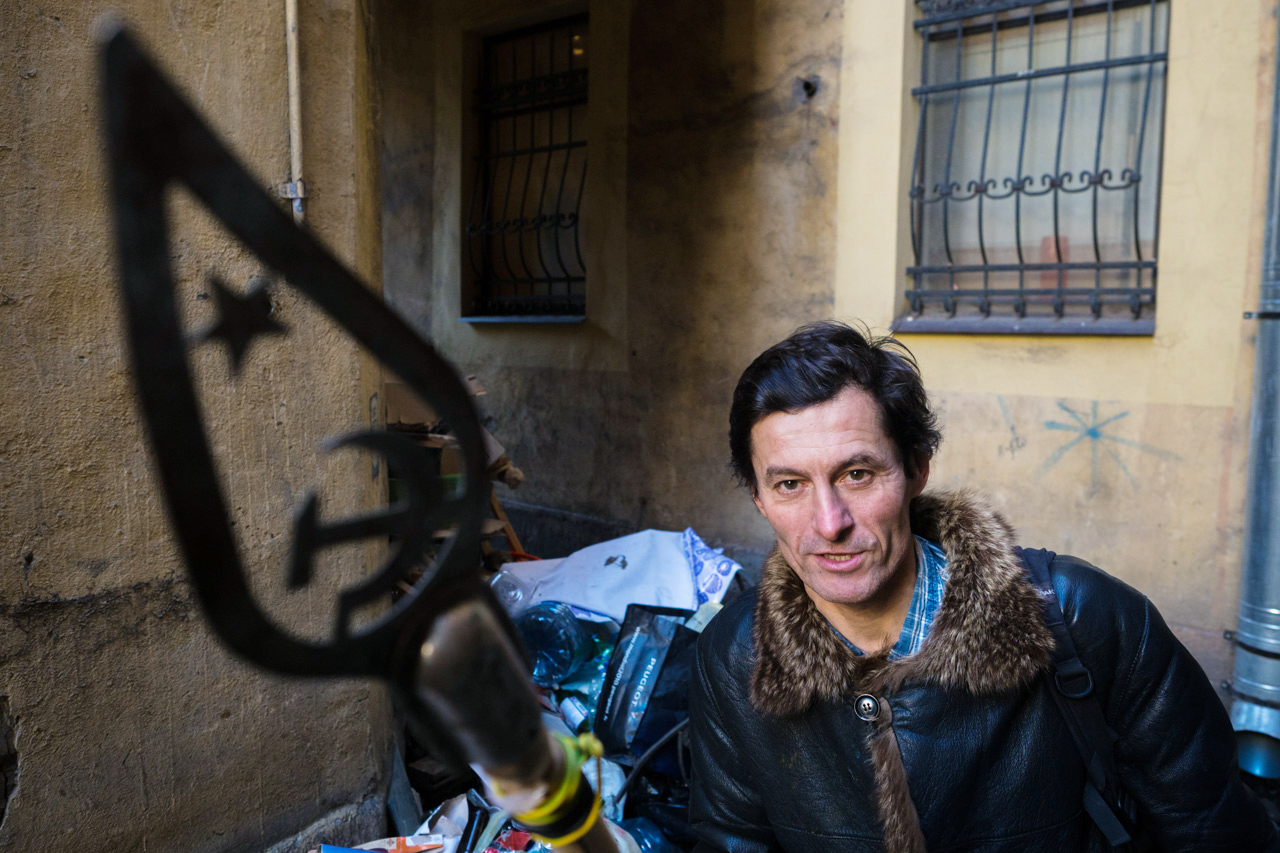 Marc Ahr: 'I love ice, because it is not eternal, like our planet.'

Ruslan Shamukov/RBTH
French artist Marc Ahr skates along St. Petersburg's frozen canals and removes the garbage, but this is only a small part of what he does in Russia's northern capital, and the locals are awfully puzzled. 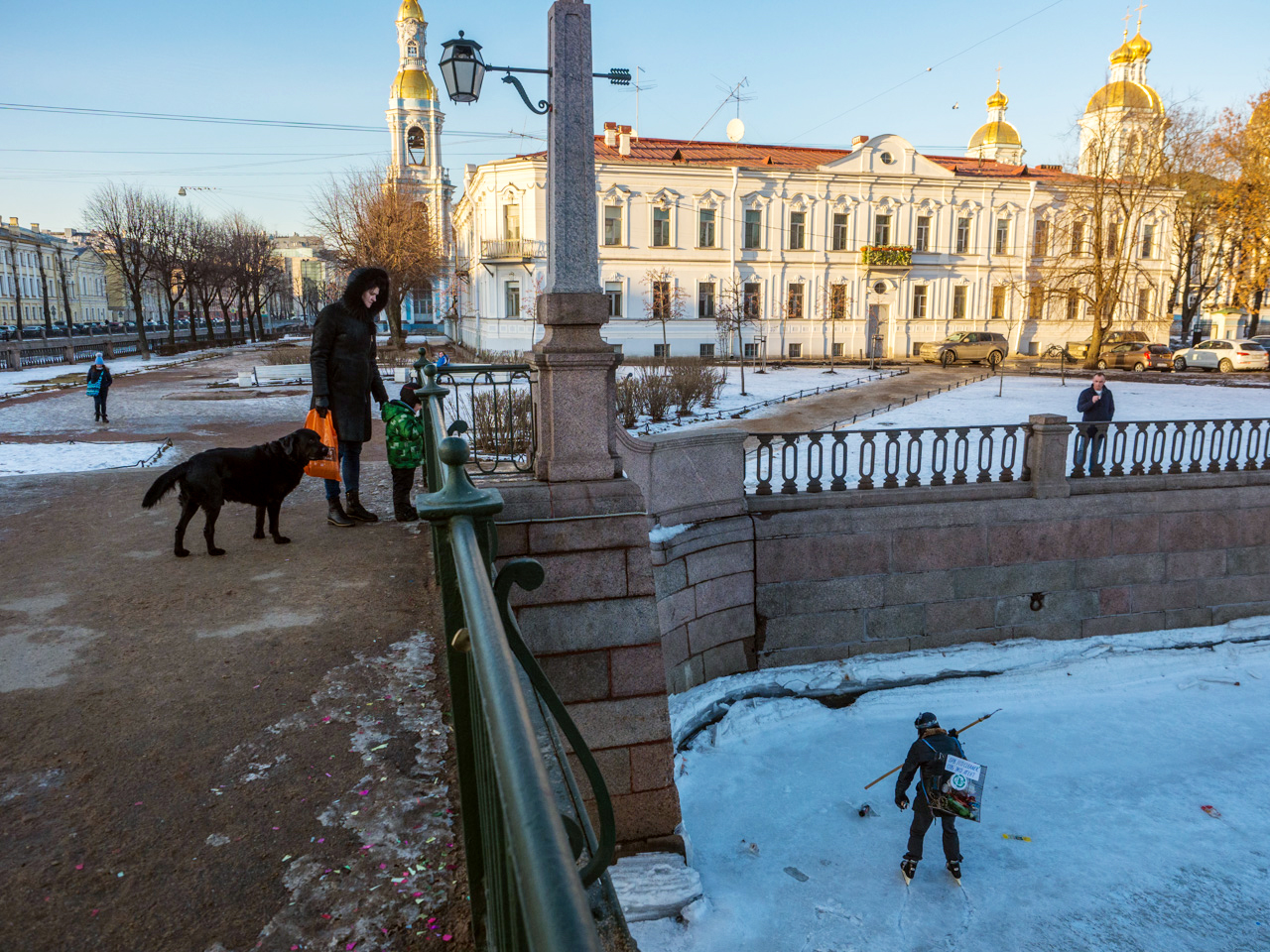 "You know, he could be the city's symbol, if he isn't already," a St. Petersburg musician tells me. We've known each other for five minutes and are watching together as Marc, a Frenchman, skates along the frozen Griboedov Canal.

Marc pins garbage with a lance he made and tries to throw it into a basket that he wears like a backpack. The basket has a sign, "Spb Eco Cleaner." He misses sometimes, but the children are nevertheless ecstatic. One ruddy woman stops in perplexity and exclaims, "It's that foreigner who picks up garbage from the frozen canals!" The locals think Marc's idea is bizarre but entertaining, and his ecological project is becoming popular. 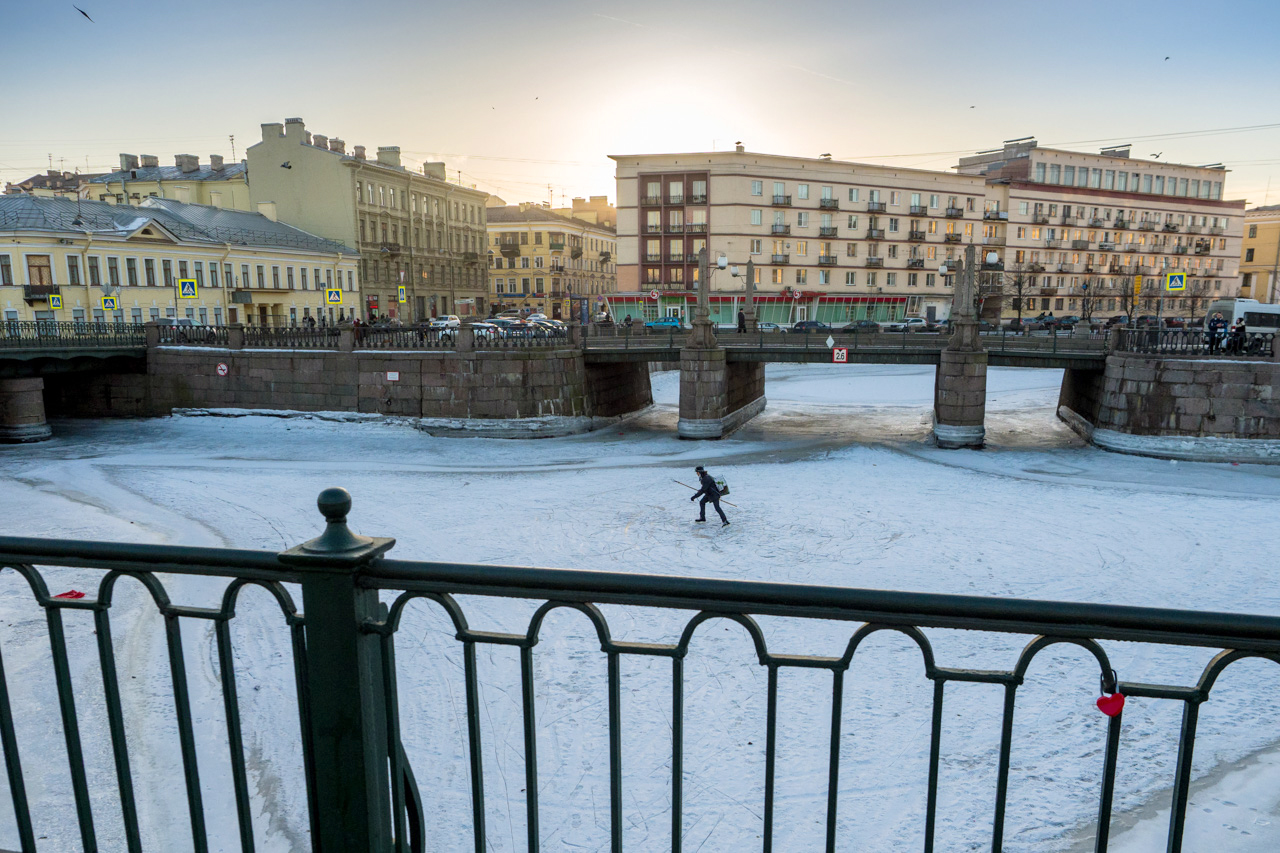 Marc is actually quite extravagant. He looks like an expat gone mad with loads of free time. It’s not that in St. Petersburg no one thinks of ecology, but no one goes into the canals to pick up garbage, making a spectacle out of it by using a lance in the form of a hammer and sickle.

A bag of needles, shells and cigarette butts

I met Marc Ahr, the "famous artist," as he calls himself, when he splendidly lowered his hands into a street trash bin and smiling, fished out his booty - cardboard. Then he took us to his yard where he has a "garden" - a collection of dozens of plastic bottles, spruce needles, eggshells, corks, banana peels and many other things. 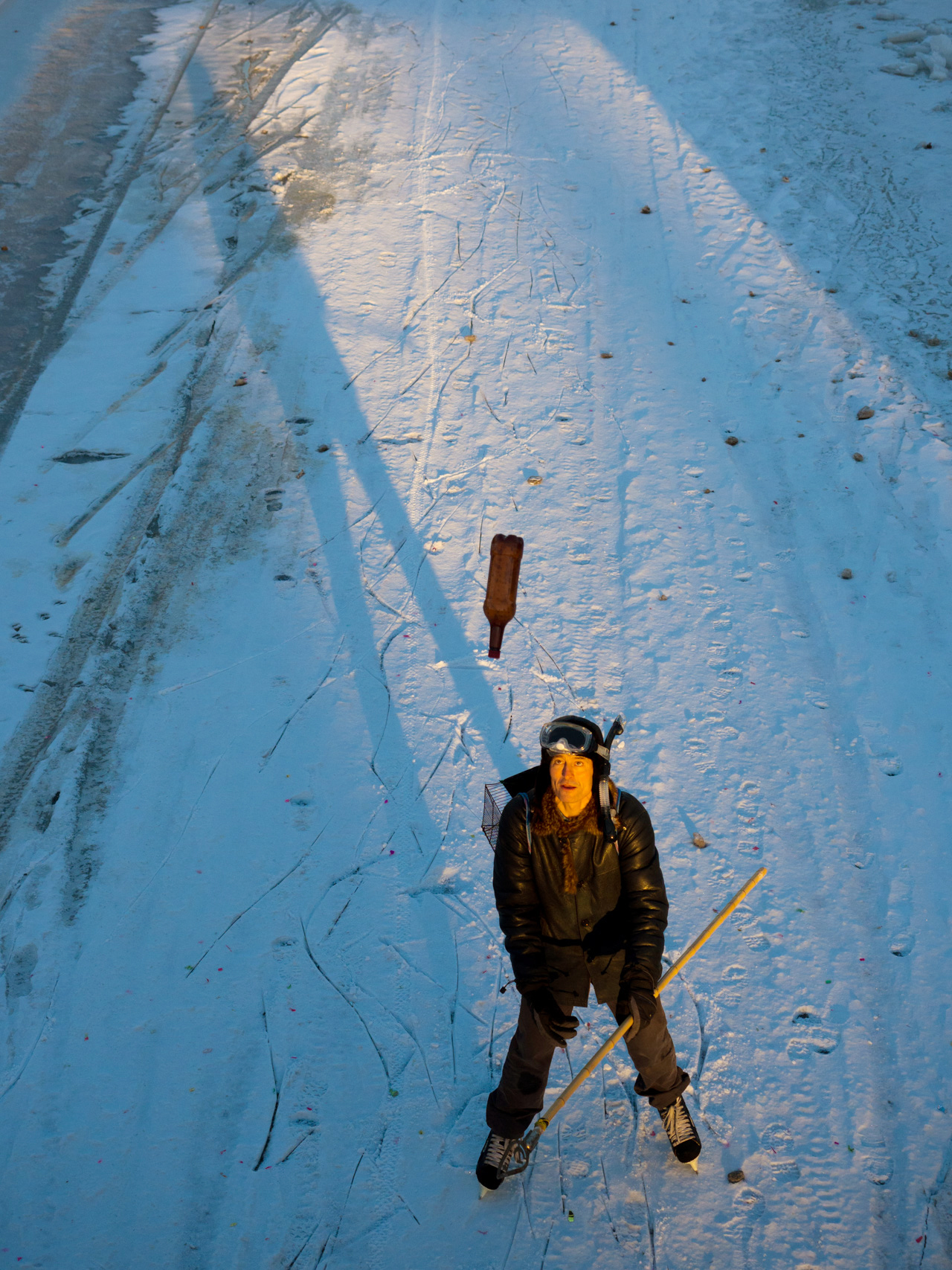 Honestly speaking, it looks like a private sorted-out dump. Some of his neighbors actually think so. "People always think that I'm a bit crazy, a madman, but what can you do?" he laughs. 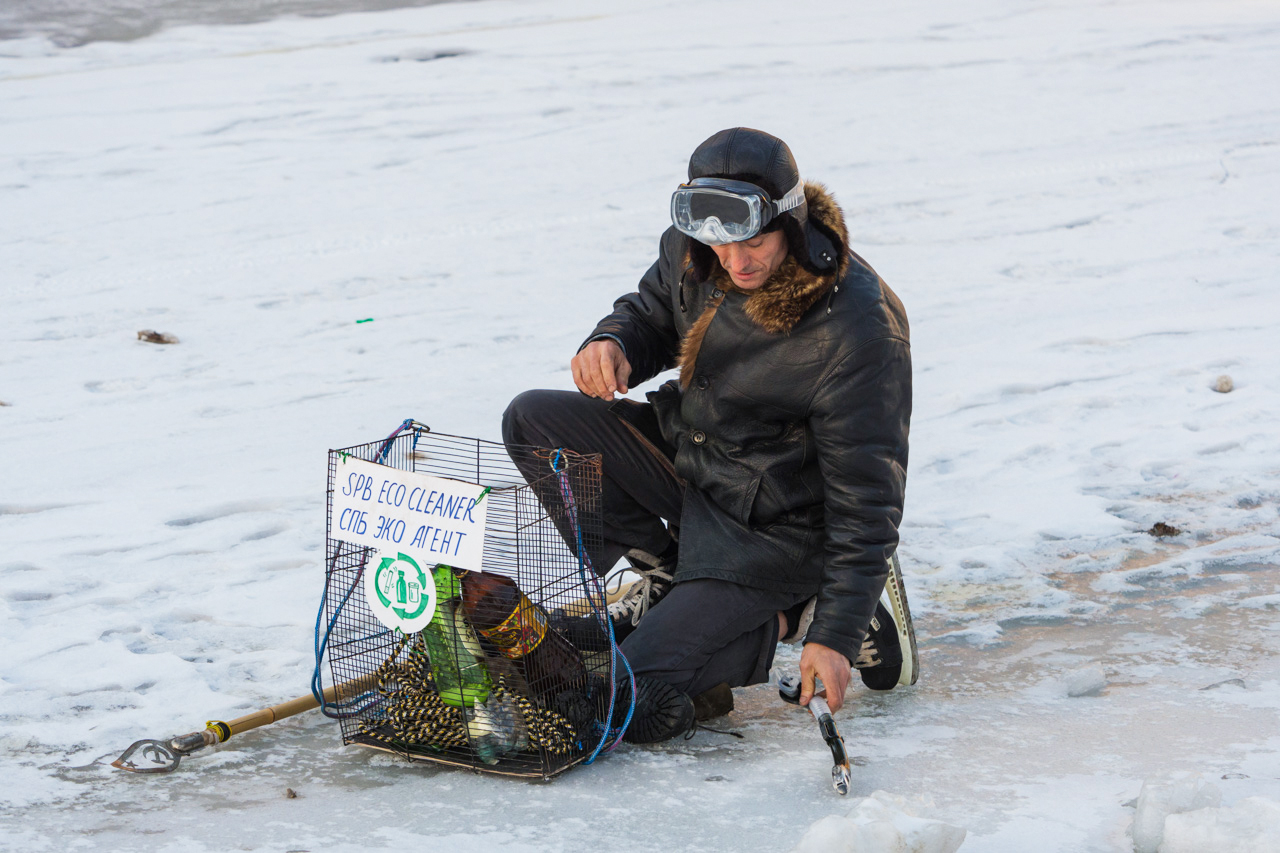 "I give these metal cans to my grandmother, who hands them in for recycling and uses the money to buy medicine."

"And what's the bag with the spruce needles and shells for?"

"It will be compost! I'll take it to the dacha." 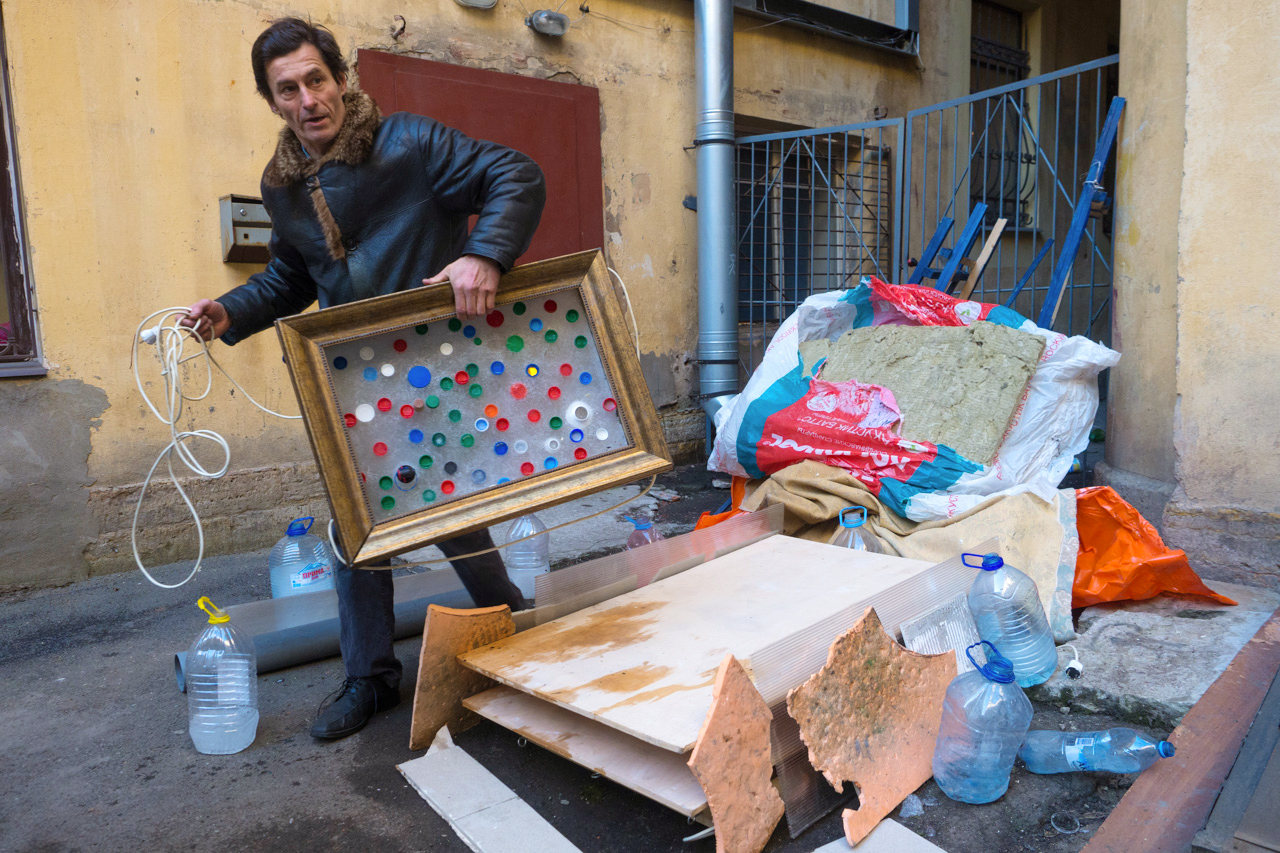 Marc believes that garbage is not garbage, but is either art or something that can be reused. This winter he made a series of pictures out of ice. He also keeps them in the yard, wrapped in fiberglass and plywood so that the February sun does not melt them. His favorite is the one with the cigarette butts screwed into the ice. In above-zero-degree temperature they have soaked, blackened and are now sadly hanging. There is a similar work with multicolored plastic corks.

"In France, you can get 190 euros for a ton of such corks. But here no one needs them," Marc says with disappointment. "And I love ice, because it is not eternal, like our planet." 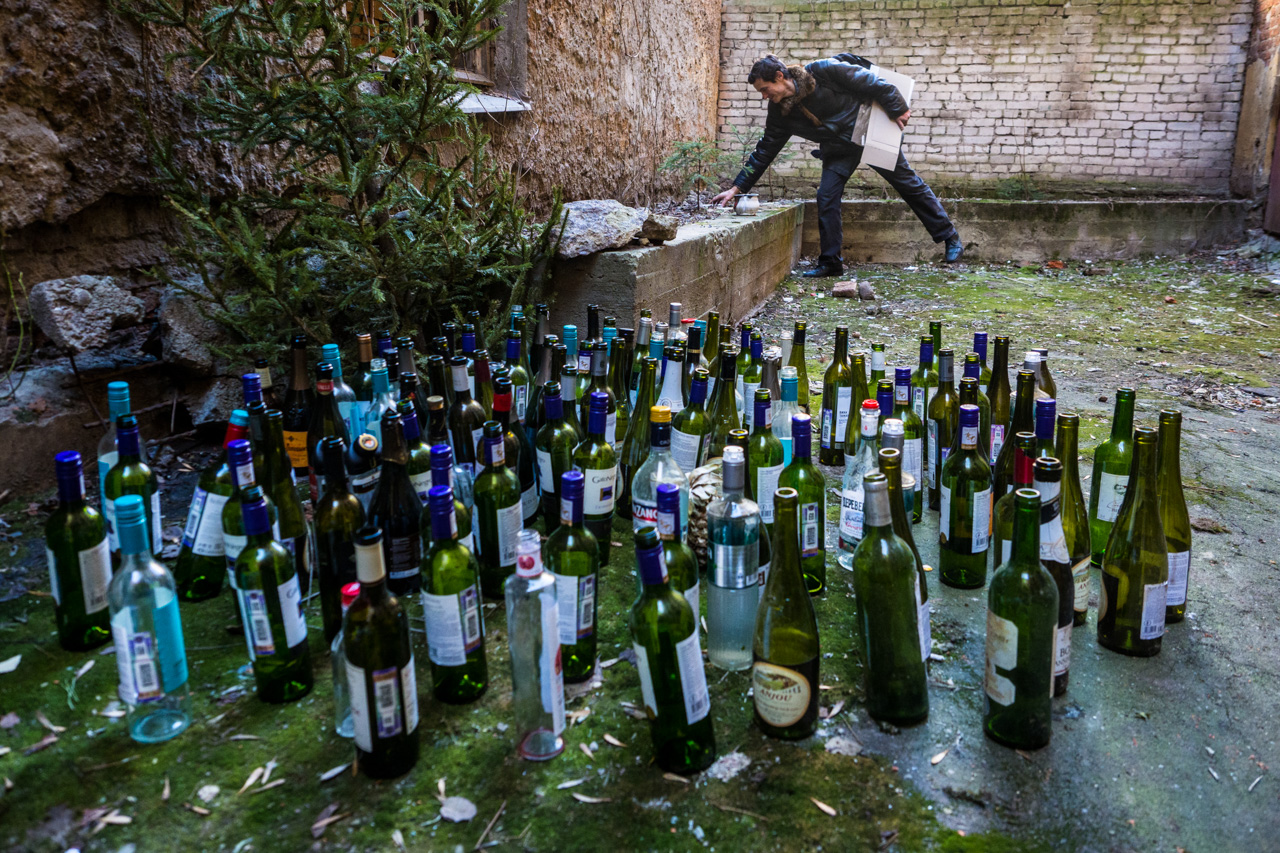 'Russia is nothing to be scared of'

Suddenly, a woman walks out into the yard. She is one of those bothered by the "ecological" neighbor. They dislike each other because she "does not pay her rent." Marc is offended by this. She thinks that she is allowed to do more than others. But she cannot; it is not communistic behavior. 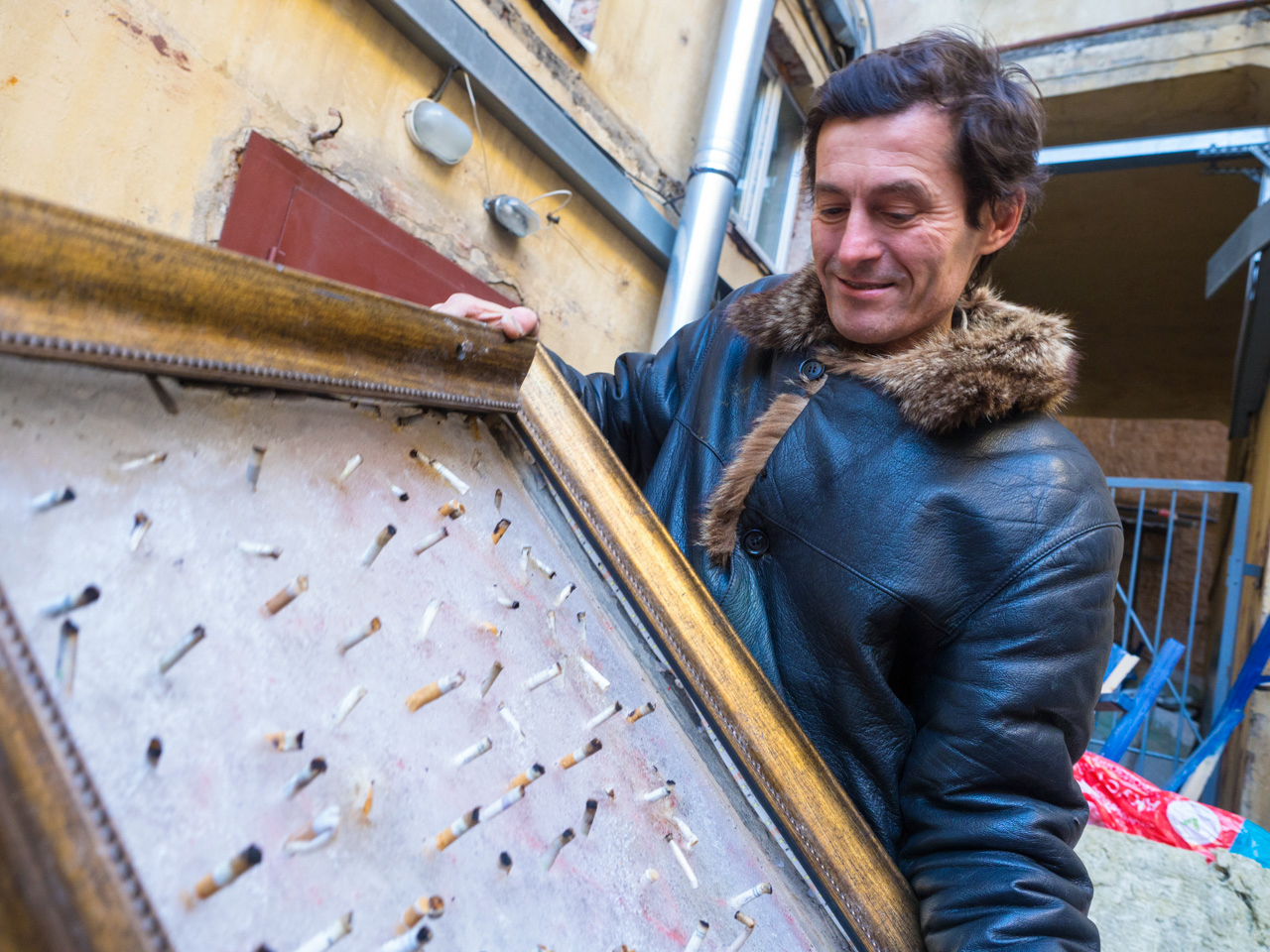 At home he has Bolshevik symbols in the form of a mosaic made of pieces of the Berlin Wall. It hangs in the most noticeable place and separates the living room with the spruces hanging from the ceiling, the "responsible" coffee under the piano cover and the glass samovars.

"I've wanted to do something with this Berlin Wall for a long time. And who spent the money to build it? The Communists, to protect themselves from Capitalism." 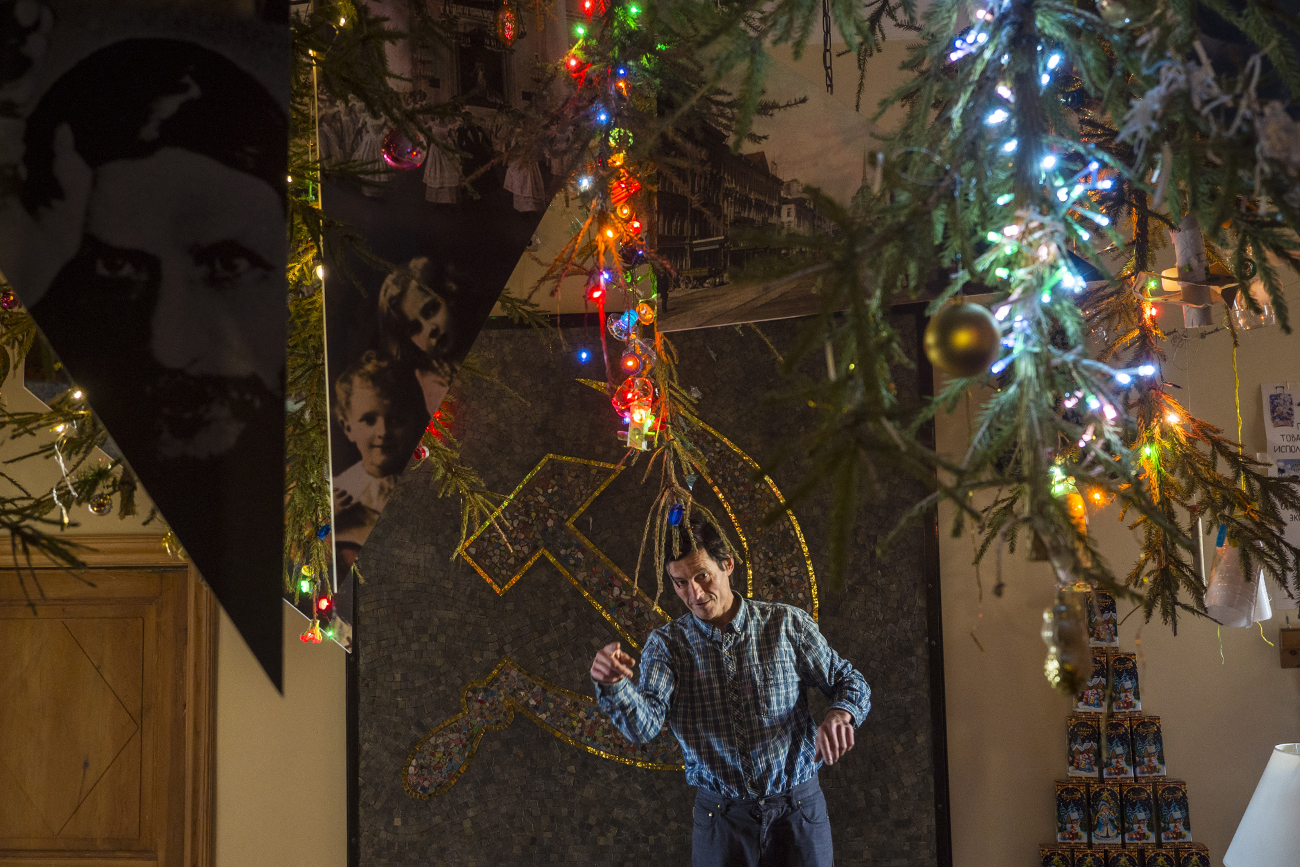 Marc went to Berlin a week after the Wall fell, and he began taking it apart by pieces, placing them into packages with the label,  "Fragment of the Berlin Wall, original." For his first four hours on the Wall and the pictures about the experience he earned $500 in France. A couple of years later he became so rich that he went to Russia and bought a 230-square meter apartment. He paid tribute, so to say, to his Russian roots.

I ask him when Communism will come to Russia.

"No, it's still too early. You are only going through the first stage of Capitalism. Karl Marx said that Communism would arrive only after Capitalism, no sooner." 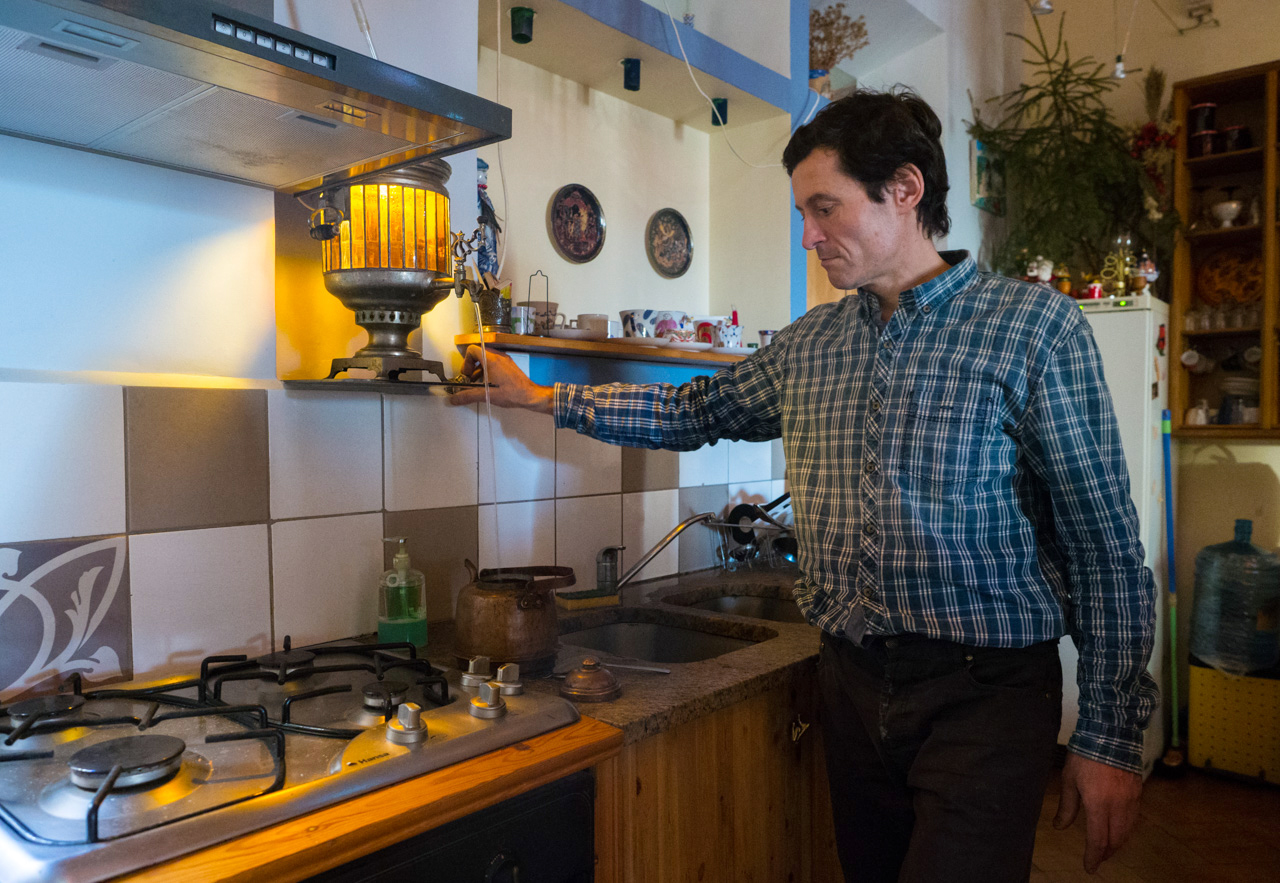 He has turned his apartment into his own micro-communist state in which each guest pays for a room based on his income: some pay 20 euros, and others pay 120 euros. For now the model works, everyone is happy and he intends to go to France for a while to get involved in politics, to get rid of corporate lobbyists and unite Russia with Europe. 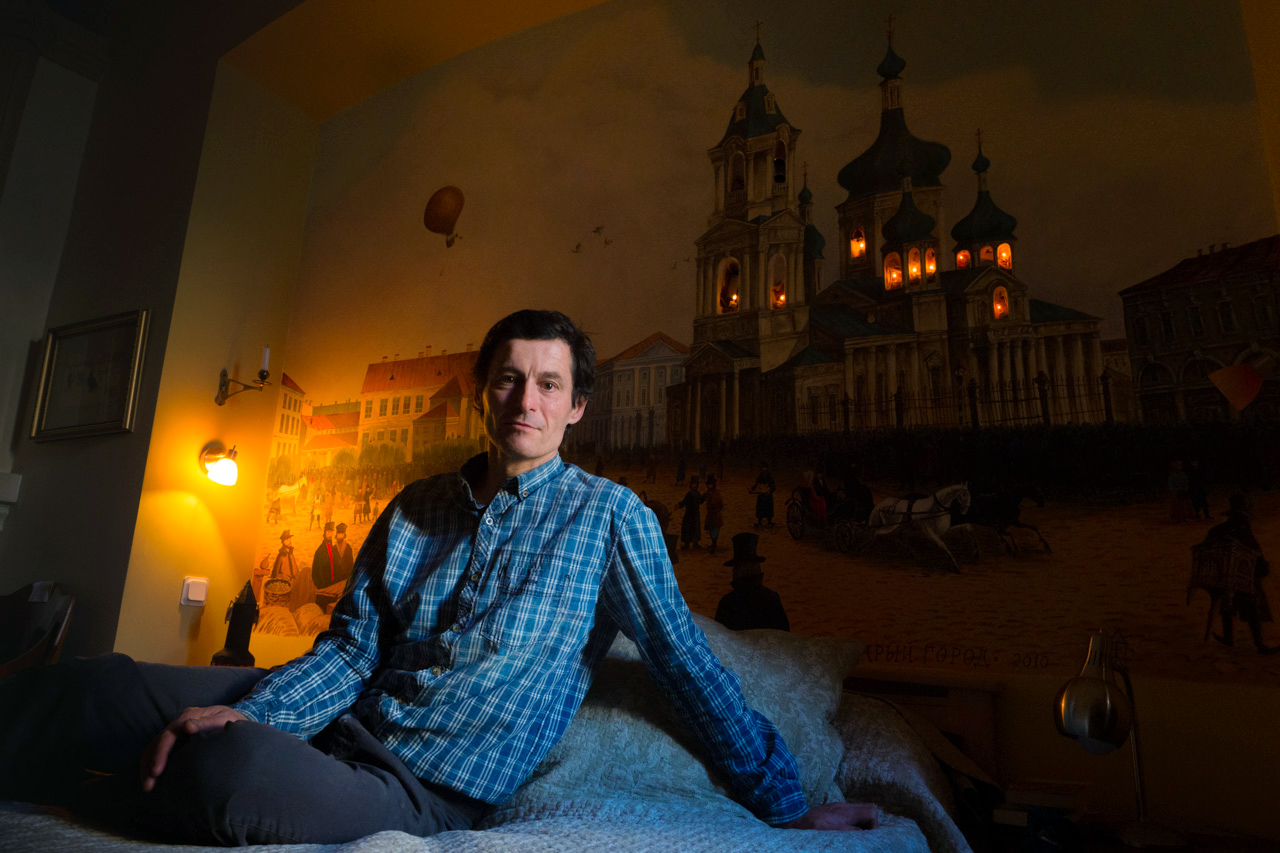 "I want people to understand that Russia is nothing to be scared about. The fact that we have one road was already demonstrated by Alexander II and Peter the Great. You even have the Napoleon cake! You have oil, and we in France have intelligent people. You have really beautiful girls, we have awful feminism. A perfect balance. We need to live better and we definitely need a revolution if we want to save our planet. I don't know how to raise people's awareness, but I want to try very much."