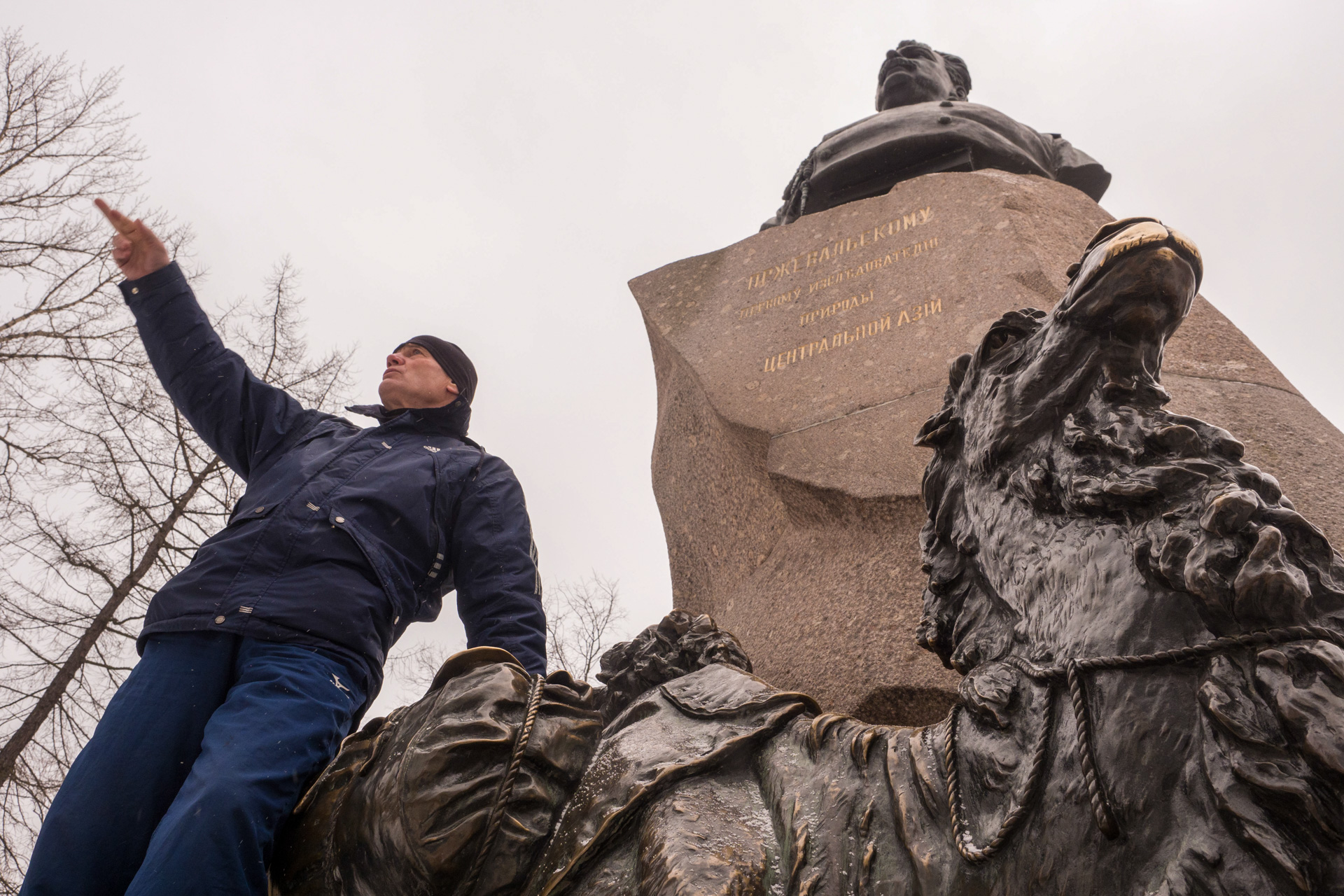 Sergei Lukyanov from St. Petersburg walked around the world in 22 months.

Ruslan Shamukov
Sergei Lukyanov just finished a most unusual stroll around the planet. It took him almost two years, at the cost of over a million rubles, not to mention surviving a sandstorm, getting mugged, hernia surgery and dropping by the Rio Olympics. In the process, he lost about 30 pounds.

Sergei Lukyanov, a 60-year-old pensioner from St. Petersburg walked around the world in 22 months, covering 15,000 miles. Many said it was impossible - "too complicated," "too hard," and "somewhat expensive."

Now he has a fan club where people debate whether it’s normal for a 60-year old to survive on snickers and Coca-Cola, as well as noodles with condensed milk, all the while covering vast distances. As soon as Lukyanov completed his grandiose adventure, journalists immediately drew literary and film analogies, and Lukyanov became known as the "Russian Forrest Gump." In fact, he does not run, but walks.

"How long did preparations take?"

"All my life. I had done nothing like this prior to embarking on my journey. I was confident that I would complete it; that's all," said Lukyanov, drinking coffee, as the snow fell in early March. 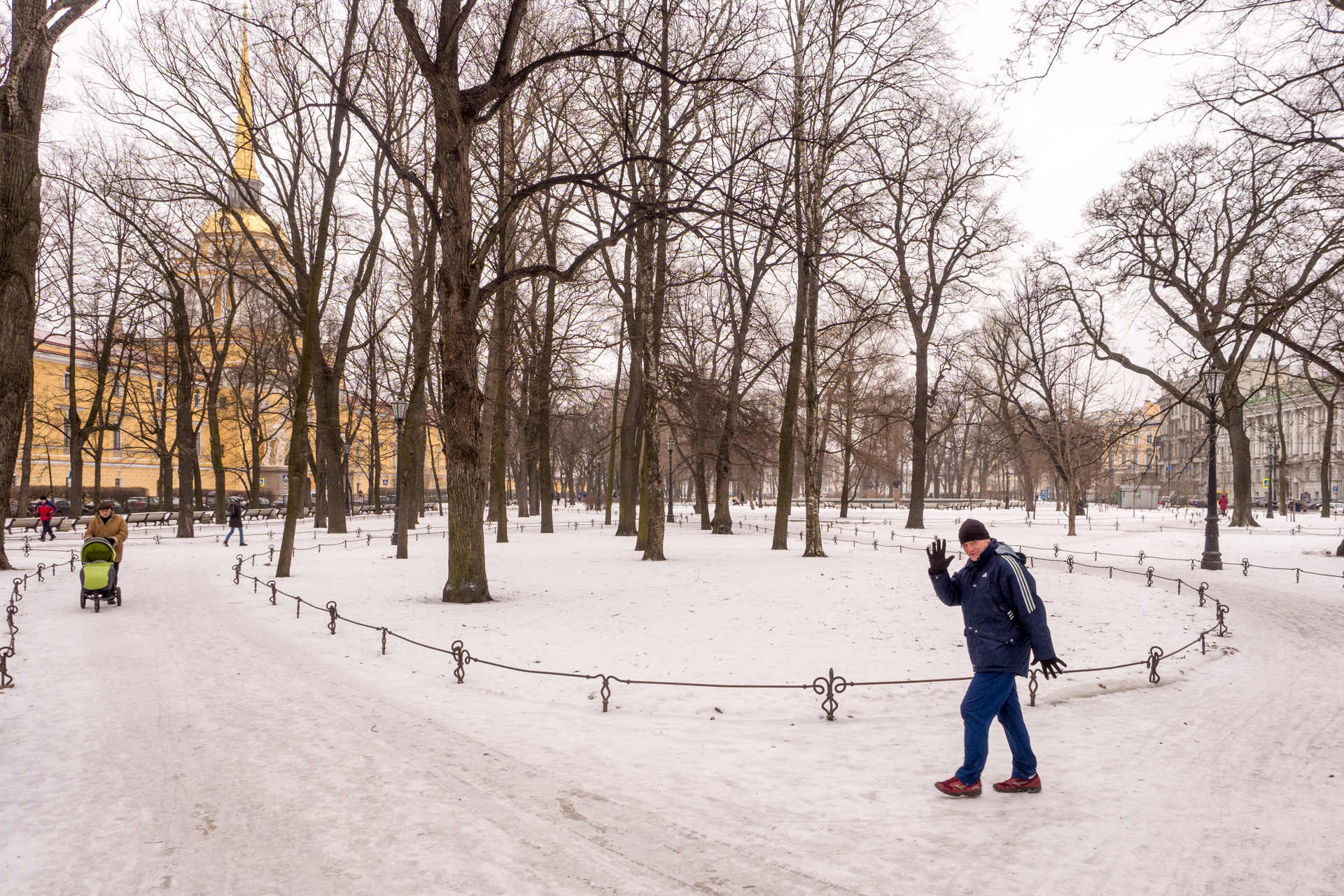 He left home on April 1, 2015 and returned on Feb. 4. During this time he "probably covered 20 countries – he finds it difficult to remember the exact number because everything "happened spontaneously." Even visa matters were dealt with spontaneously.

"For instance, I arrived at the Chinese border where I believed was a checkpoint, but when I got there, it turned out that the checkpoint was only for Chinese and Vietnamese citizens. Everyone else had to go to a different checkpoint, 300 miles away. My visa had already expired, but I had to take a detour and ended up paying a fine."

The speed of his progress depended to a large extent on visas. He had to cross Vietnam in two weeks and he had three days for Singapore. "These are tricky things, and there should be special people to deal with them," said Lukyanov.

In St. Petersburg, his friends organized a coordinating center. A friend, Mikhail Sokolovsky, "lived" every day with him for all 22 months - he sent directions and searched for people prepared to meet Lukyanov or put him up for the night.

"I would not have believed that in China one can stay for 24 hours in a posh bathhouse for 300-350 rubles ($5-$6), but thank goodness a Russian acquaintance took me there. They give you a bed, disposable pajamas and a towel; there is a TV, a computer, vegetables and you get a massage," said Lukyanov.

Money was a major issue because he had to survive two years without working. Before retirement, Lukyanov worked as a coach. (He was a Soviet and Russian record holder in the 60 mile walk.) His daily budget was 500 rubles and he covered between 30 and 36 miles a day. In total, the round-the-world trip cost him no less than 1 million rubles ($17,000).

Lukyanov slept at bus stops, in parks, and at airports.

"In Europe hotels are a problem because they cost about 50 euros. So I took a sleeping bag and went to a city park at around 10 p.m., just before they’d close for the night. I'd hide from police under a tree. I only stayed in a hotel, for example, in Belarus, when it was minus 40 degrees Celsius," he said. 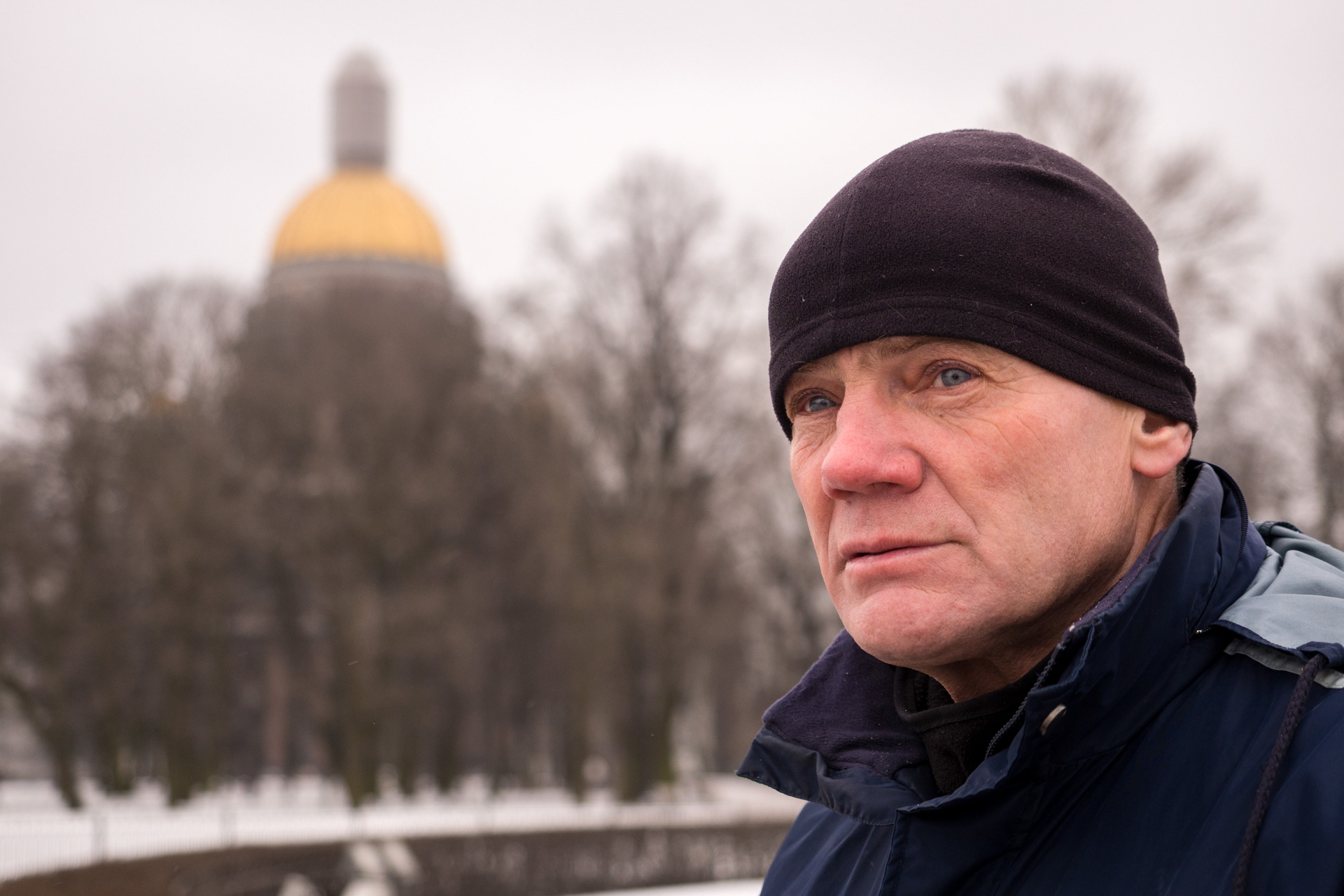 To eat, Lukyanov always had something local, often nuts, and eventually he ground down all his teeth. But mainly he ate cheese, smoked meat, butter and bread. There was no hot food and no water. During the trip he lost almost 30 pounds.

"I changed towns every day, and since water is different everywhere it takes the body about a week to get used to the new conditions. To avoid diarrhea, I drank Coca-Cola since it’s the same everywhere. One Coca-Cola can has eight spoons of sugar, which is energy enough for 3 miles. Had I had soup, it’d have been enough for half a mile in terms of energy consumption," said Lukyanov opening his belt bag and taking out a Coca-Cola.

"I always have it with me, and it turns out that one can use it even to dilute Dosirak (fast-food noodles)."

"In other words, noodles with Coca-Cola?"

"Well, when you are hungry, you'll eat it. It tastes OK. You soak the Dosirak in cold Coca-Cola but it takes an hour, not three minutes."

Even before Lukyanov crossed Russia, somewhere near Kemerovo, he had to undergo surgery for a hernia. Recovery was supposed to take a year but 45 days after the operation he left hospital, put on his backpack (weighing up to 40 pounds) and two abdominal support bands.

In South America, when he had already been travelling for over a year, he was attacked by people armed with pistols and knives. They took his bag, payment cards and his phone with all his photographs. "I had to stay with a friend in Buenos Aires and wait for all the things I needed to be sent to me. I wasted three weeks there," Lukyanov said. 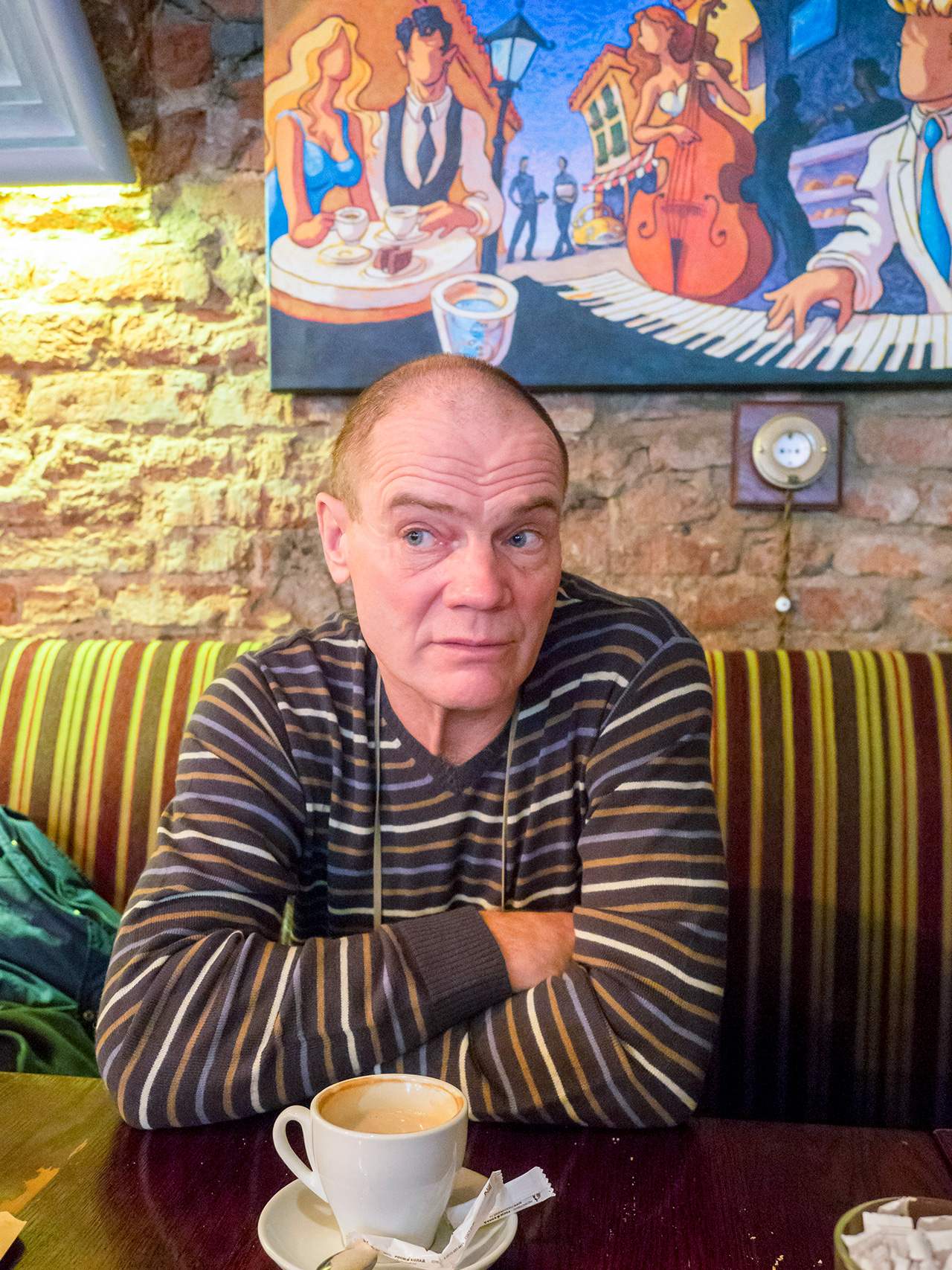 During the trip, he had to deal with many difficult situations. But every time he overcame them and he continued on his journey. He even arrived in Rio in time for the Olympics.

"I turned out to be the only Russian athlete there because our athletes didn't come, but I had left well in advance," he laughed. [Owing to the doping scandal, long jumper Darya Klishina was in fact Russia’s only athlete there - RBTH]

The most difficult thing psychologically, however, was to leave home.

"It said on my backpack that I was travelling around the world," Lukyanov said. "I was alone, completely alone for two years. I didn't know any other language except Russian and had to use gestures to communicate."

A round-the-world trip is expensive. It’s better to find someone who will pay part of the costs; for example, to pay for sneakers. A friend from Mizuno was sending them to Lukyanov, who needed about 10 pairs - one for every 1,800 miles, or a month's walking.

2) Take navigation aids that work without the Internet

The Internet is not available everywhere and paper maps do not always help. Unless you want to take a 300-mile detour, think about navigation aids.

3) In Europe, spend the night in parks and at airports; in China - in bathhouses

If you don't want to spend the night in a bathhouse, you can stay in a hotel. Unlike Europe, in Asia hotels are not expensive but they are not that different from bathhouses, according to Lukyanov.

Lukyanov found smartphones, money and even an electronic notebook along the way in most countries, but in Russia he found nothing. "Only some small change in Buryatia which they throw away for good luck. Unless you are a Buryat, you can pick it up."

6) Have coordinators back at home

On your own, you won't find out everything. It’s better to have several people "at base" that have access to the Internet and who can always help with an address, or a shop or how to find someone.

You should walk at a pace that doesn't make you sweat, between two and three miles an hour, and cover up well to avoid the sun’s rays. "You can walk in shorts, but then the body will need to work twice as hard to cool down."

8) Don't start with an around-the-world walk

To make a round-the-world trek, don’t start with it. Lukyanov is so fit that he can cover the distance between Moscow and St. Petersburg, 420 miles, in six days. But if you really want to, think about taking an auxiliary device, something like a longboard with a motor.

Read more: Frenchman cleans up after Russians; what's Communism got to do with it?