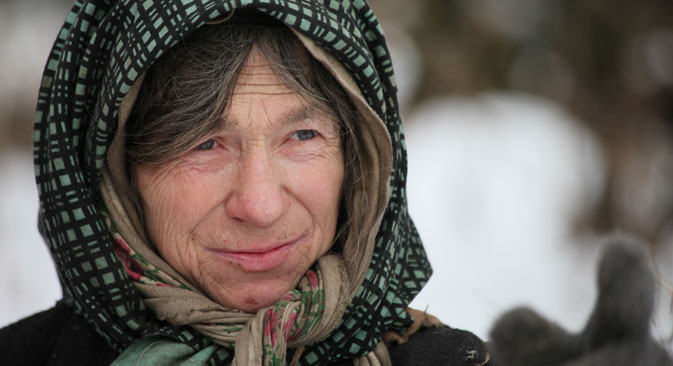 Documentary UK film crew profiles a wilderness woman who has only ever known life in the raw embrace of nature.

Agafia Lykova emerges from the thick forest on the banks of the Abakan River like an image from Russian folklore. Dressed in ragged black sackcloth, with a tattered headscarf and a triangular prayer amulet hanging from her neck, she greets visitors arriving by helicopter from another world.

Agafia, 70, lives just 100 miles south of Tashtagol – an industrial town of 23,000 inhabitants centred around an iron ore mine – but her world owes more to the remote past than the 21st century. The nearest human settlement is two weeks away by foot.

It is this very timelessness that paradoxically brings the modern world to her distant doorstep. A team of British female film-makers made the arduous journey in October, seeking to produce a deep and sensitive portrait of a woman who exemplifies the ancient connection of  humankind to the planet.

When director Rebecca E Marshall, based in Hastings, East Sussex, first heard of Agafia she had an immediate fascination for her story. “For two years I couldn’t stop thinking about Agafia surviving alone in the vast Siberian taiga,’ she says.

A cashmere classic from Russia: 10 facts about the Orenburg shawl

“Our film, The Forest in Me, is a meditation on the nature of individual human identity in this distant dreamscape, cut off from the world of mass communication.”

Marshall did not even allow the birth of her first child six months ago to derail her plans. Together with director of photography, Bristol-based Sarah Cunningham and Ukrainian-born assistant director Elena Andreicheva, she raised more than £14,000 in a crowdfunding campaign to get the project off the ground.

Another round of fundraising will be needed for post-production to complete the film ahead of its release late next year.

The Forest in Me approaches Agafia’s story with sensitivity to her intrinsic connection to the natural environment in which she lives. Born in the Sayan Mountains in 1945 in a remote area of southern Siberia close to the  Mongolian border, Agafia is the last member of a family of Old Believers (a Russian Orthodox sect that broke away from the main church 350 years ago).

After fleeing Stalinist religious persecution in 1936, the family made their way deep into the taiga – as the wild expanse of conifer and birch forest is known.

The family lived in utter isolation for decades, scraping a living from the thin soil, until a group of Soviet geologists, flying over the area on a mineral prospecting mission, discovered them in 1978. Contact with people heralded an end to their way of life: by 1988 when her father Karp died, Agafia was left to live alone in the wilderness, sometimes having to fend off bears with burning torches of birch bark.

A small woman, with face and forearms as dark as the cedar pine cones she collects from the forest floor for their nutritious nuts, Agafia’s religion and daily liturgical practices don’t prevent her extending warmth and welcome to her visitors.

Entirely at ease with the British film crew, Agafia answered searching questions with typically pragmatic responses. Marshall had long wondered how a woman who lives alone in such a vast wilderness copes with our western urban affliction of loneliness. Agafia’s response is simple. “A Christian can never be lonely,” she says. “Every Christian has their guardian angel, as well as Christ and the Apostles.

Test: Could YOU survive the Russian winter?

“I have an icon that has been blessed. I am never lonely as I always have Christ with me.”

Asked whether life is better now or was better before contact with the outside world, Agafia remarks: “Back then, we had not salt.”

A casual observer might dismiss this diminutive woman as a simple soul. But to spend time with Agafia, as the crew did during filming for The Forest in Me, is to discover certain depths and nuances that those who know her say are part of the reason she has attracted such strong support for continuing her unique way of life. This support comes from the highest levels in Russia, including Kemerovo Region governor Aman Tuleyev, Orthodox Church leaders and President Vladimir Putin.

The outside world is not one she feels she can live in, but those who come to visit her from that place are welcome.

“The world is going to ruin; I feel it is my duty to share my faith with those who come here,” she says.

Agafia enjoys company and will talk happily for hours in her soft, sing-song voice that mixes modern Russian with words long fallen out of use: “good”, is not khorosho but basko; “mushrooms” (gribi) are putiki.

While in splendid isolation, Agafia was always aware of another world not so far away. She recalls seeing a satellite for the first time on a summer’s night when she was 17:“Looking up into the stars I noticed one that was moving, and thought how strange that was.”

Remote as the Sayan Mountains are, they lie under the Baikonur Cosmodrome launch path and the area is littered with space debris; a large piece of a Russian Proton rocket – an air inlet and fan – is wedged into the roots of a fallen tree on the banks of the river a few minutes walk upstream from her homestead.

That the outside world should eventually encroach on her life was inevitable. But she remains adamant that she wishes to remain living in the land of her birth. Like the fish that she says, “see everything in the forest”, Agafia is part of the taiga.

Read more: ‘This is not a show, this is work’: Revelations of a Siberian shaman