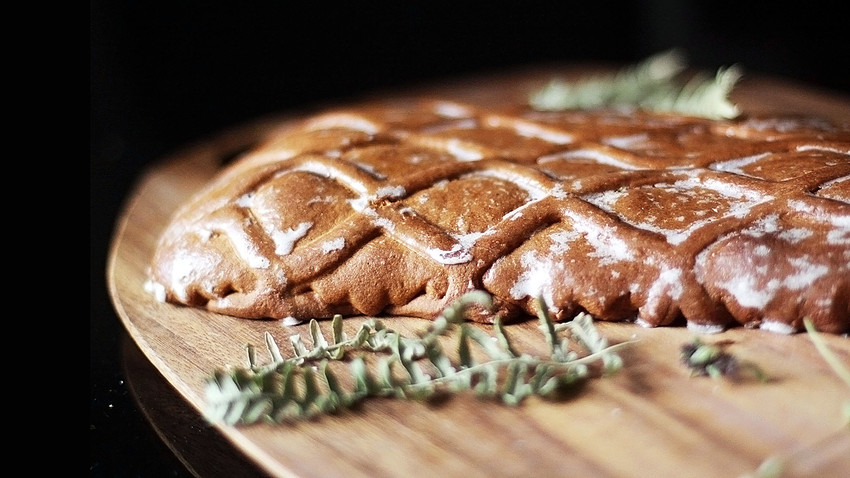 The easy-to-make traditional pryanik recipe has a truly authentic taste.

Victoria Drey
Pryanik, a type of flat honey cake, is a favorite traditional Russian delight. The city of Tula is considered to be its birthplace, first made in the 16th century, and 500 years later the Tula pryanik remains Russia’s gastronomic pride.

The first pryaniki are known since the time of medieval Rus, and were simply called, “honey bread,” which were made from berry juice, rye flour and honey. In the 12th-13th centuries, when Russia started importing different spices, pryaniki acquired their widely known appearance and taste. Henceforth, numerous Russian regions began experimenting with pryaniki recipes by adding different types of honey, spices and putting delights into various shapes. Tula culinary experts were the most successful, and they still try to keep the most popular pryaniki recipes secret. Today, however, you can learn some hidden facts at the largest pryanik museum in Tula. So, if you visit the ancient city don’t miss your chance to unravel the mysteries of the pryanik.

What distinguishes the Tula pryanik from other types is that it has two halves and a filling: jam, confiture or brewed sweet condensed milk, which is Russia’s version of dulce de leche. The Tula pryanik is a type of imprinted pryanik, and wooden handmade imprints may include different symbols, inscriptions and patterns. Probably the most famous Tula pryanik is the one made in 1896 to commemorate the coronation of Emperor Nicholas II. The imprint of this enormously huge pryanik included the monarch’s profile, and was used only once, which is rare for pryanik imprints. Usually, each wooden form is used for at least several decades. Actually, because of an imprint’s long manufacturing process the original pryanik’s cooking takes some years. A wooden form is manually carved from birch, pear or apple tree, and then allowed to dry for at least 5 years.

The Tula pryanik recipe that I came up with takes much less time, but the taste should amaze you. It’s one of my favorite recipes, especially in dreary autumn weather.

1. First of all, prepare a bain-marie. While the water begins to boil, whisk the eggs in a bowl.

Then add in butter, sugar, baking soda, all the spices and honey, and put the bowl on the bain-marie. I recommend using at least one tablespoon of buckwheat honey because it gives your pryaniki a more authentic brown color and rich taste. As your mixture gets warmer, gradually stir it until it becomes absolutely smooth. It should turn to a honey color, smell amazing and has some kind of white head on the surface. 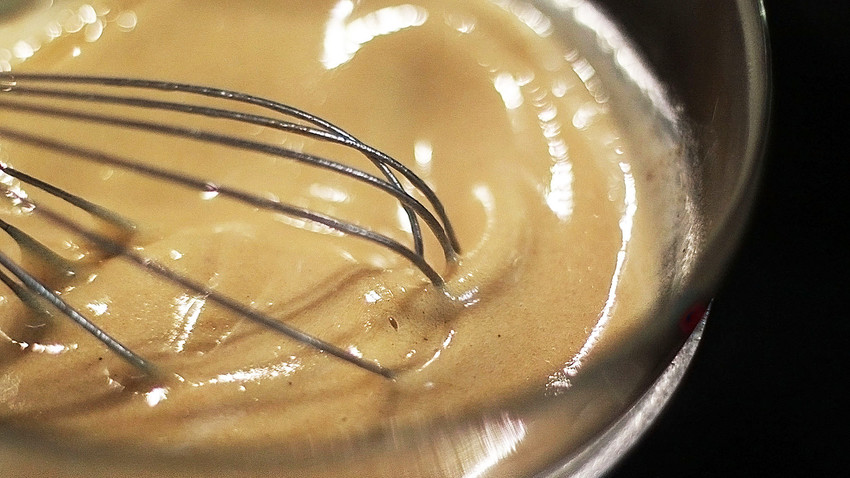 2. Then take the bowl away from the bain-marie and let cool. It is very important, because hot dough soaks much more flour and it can make pryaniki too firm. When the dough is not piping hot anymore, start adding flour in small portions into the bowl and mix properly. 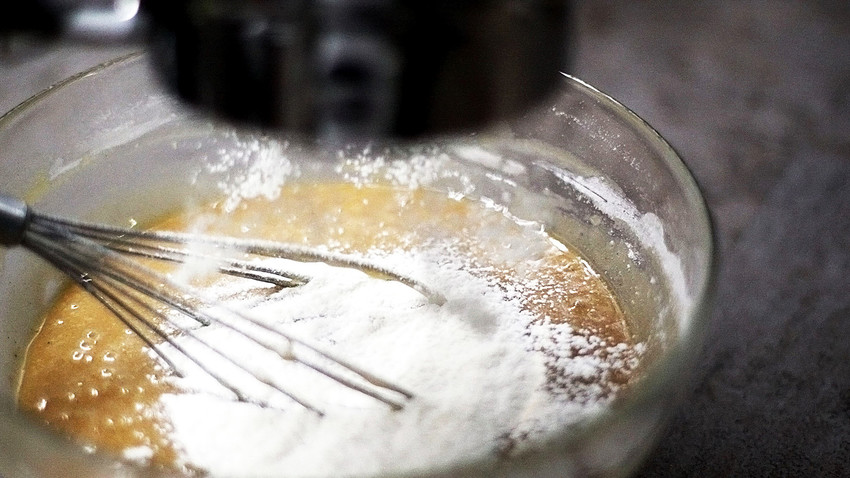 3. When the dough has a nice thick consistency and it is hard to mix with a whisk, put the dough out on your cooking surface and dust with a bit of flour.

Be careful with the flour; don’t put too much; when you feel the dough is dense enough and not sticky but still soft, stop adding flour. Then divide your dough into 2/4/6/8/10 pieces depending on how many pryaniki you’d like to cook. 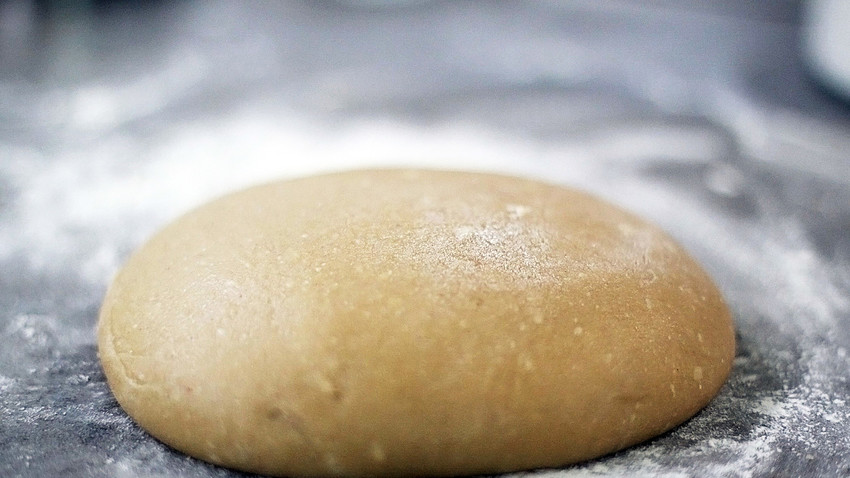 4. Roll one piece about 0.5-0.7 mm in width and cover with your favorite jam or dulce de leche.

Next, roll another and cover your first layer and filling with it. Now, all you have to do is to put the pryanik into the desired shape and decorate. As I have no wooden imprint I use my fantasy. 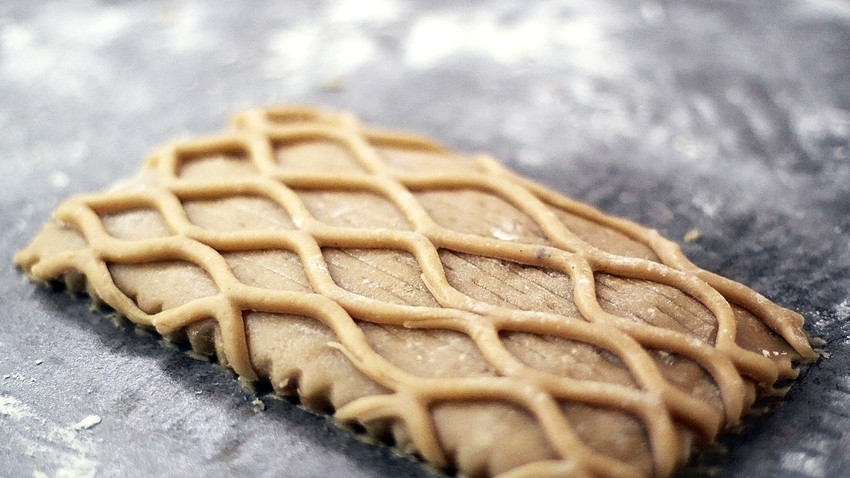 5. Bake pryaniki for about 20-25 min ( at 170 °C) until brown and fluffy. While pryaniki are in the oven, prepare the glaze. Properly mix 5 tablespoons of caster sugar with about 2 tablespoons hot water. Cover pryaniki with the glaze right after you take them out of the oven.

When the pryaniki cool, the glaze should turn white – just like the original Tula pryanik. 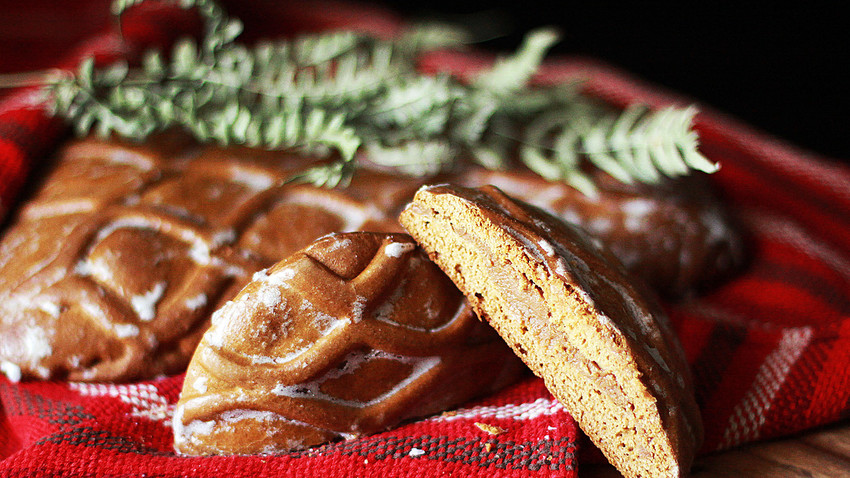