Why do Russians always drink tea (often with lemon)? 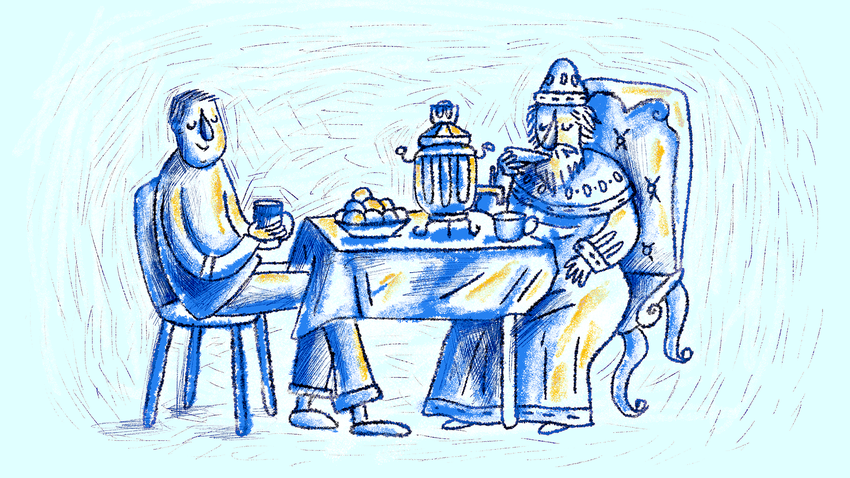 No matter if you are a tsar or just an ordinary Russian person - most certainly you drink tea.

“All Russians drink vodka, and if I’m invited to someone's home I’ll certainly try some,” a foreigner might think, relying on the usual stereotypes.

That’s a bit of an exaggeration, however. Not everyone in Russia drinks alcohol, let alone vodka – the strong taste is not for the faint-hearted. So, your chances to be offered a shot of vodka on the first visit are rather low. (Unless it’s a direct invitation: “Let’s go get drunk as f**k.”)

What you certainly WILL be offered is tea. You don’t even need to go to Russia – Russians order tea in a restaurant or café whatever the time or the country they are in.

“Tea is sacred for Russians,” you might think. Indeed, Russians love tea and always drink it. According to a 2014 poll, 94 percent of Russians drink tea.

Famous author Leo Tolstoy used to say: “I needed to drink much tea for I can’t work without it. Tea awakens those opportunities that dream deep inside my soul.” And no vodka at all.

Unlike Napoleon or Hitler, tea successfully ‘invaded’ Russia and conquered the country for good. As with most other countries, tea was originally imported from China, but when exactly? Historians still argue about that. The 19th-century scholar, Dmitry Prozorovsky, wrote that Russia’s envoy to China in 1654 had mentioned it as “a common thing,” adding that, “Tea is one of the main necessities for a modern-day person.” That's certainly a very Russian attitude.

“By the middle of the 19th century, all social strata, from nobles to the poorest peasants, were drinking tea,” historian Alexey Volynets wrote in an article for Russian Planet. Even Nicholas I, Russia’s severe tsar from 1825 to 1855, ordered to serve imprisoned revolutionaries “with tea,” because not doing so would be inhumane.

With tea quite cheap, everyone could afford it. But the tea that the aristocracy and rich merchants drank surely was different in terms of quality.

In short, drinking tea became a Russian tradition uniting people of all backgrounds. In 2016, research conducted by Euromonitor International showed that 78 percent of Russians chose tea in a binary “tea-or-coffee” contest. (In the U.S. the 'coffee party' won with 75 percent; no wonder the two countries often misunderstand each other).

All kinds of tea lovers

No matter who a Russian might be – a saint or a villain, a genius or a mediocrity – chances are great that he loves tea. Here are just a few examples, (and we already mentioned Tolstoy):

Alexander I, who reigned from to 1801 to 1825,  made tea affordable in restaurants and in city markets. He enjoyed the drink, with courtiers reporting that he always “starts his day with green tea and cream, with toast.”

Vladimir Lenin, the architect of the October Revolution in 1917, also enjoyed tea. Many memoirs by revolutionaries of that period begin with Lenin drinking tea with his comrades. “During his time in exile abroad, as well as after it, he drank beer or wine from time to time, but never was a fan,” Sovsekretno.ru wrote.

Joseph Stalin, the most controversial ruler in Russian history, also had some common human features – a love for tea, for example. Marshal Alexander Vasilevsky recalled: “Usually during his assistant brings him a glass of tea with lemon… Stalin squeezes the lemon into the tea, adds some cognac and drinks the tea sip by sip…”

What’s up with lemon?

Stalin wasn’t the only one to enjoy lemon in his tea, and this habit is specifically Russian.

"No one does that anywhere else,” Svetlana Ustyugova, an expert on Russian dessert, told AiF. “The tradition appeared at post stations (in the 18th – 19th centuries) when travelers were changing horses. Roads were poor, so they often had motion sickness. Something sour helps in this case, and so they were offered tea (to warm up) with lemon (to feel better).”

In addition, in a cold country such as Russia, it's important to have foods with vitamin C. Not all Russians, however, prefer tea with lemon. Some like it the English way, with milk; but many also drink plain tea. In the end, there’s no such thing as ‘bad tea’ for a Russian.

And here is an article on how to drink tea the true Russian style. Enjoy!