City loaf: A Soviet type of breakfast bread to bake at home (RECIPE) 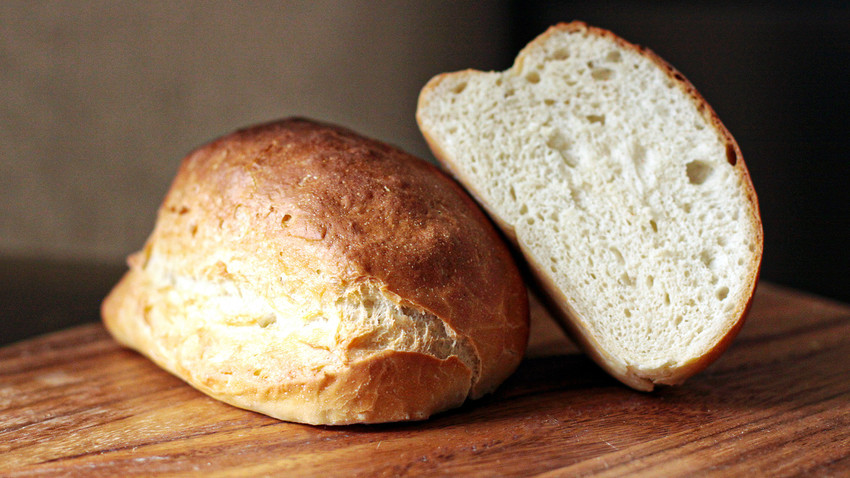 Victoria Drey
Crispy and golden outside, soft and airy in – despite its simplicity, these small loaves are the best white breads you’ll ever try.

It’s widely considered that the history of city loaf began in the USSR. However, it’s much more likely that this type of small bread was popular in Russia even in czarist times. Back then they were called “French loaves” and were baked according to a traditional French recipe. Apparently, later on, Soviet bread technologists slightly changed it, gave the bread a new name, “city loaf,” and developed a GOST – a state standard recipe that’s used by Russian bread makers up to the present day. What makes these two recipes different is that instead of a bread starter used in the French recipe, in the Soviet one they use instant yeast and traditional Russian pre-dough technique called “opara.” This makes the baking process easier and faster.

A slice of city loaf generously spread with butter and sprinkled with sugar was an essential part of my childhood breakfast routine. I still love city loaf. However, it’s not that easy to find it today, so the best way to try it is to bake some home-made ones.

Ingredients for the pre-dough: 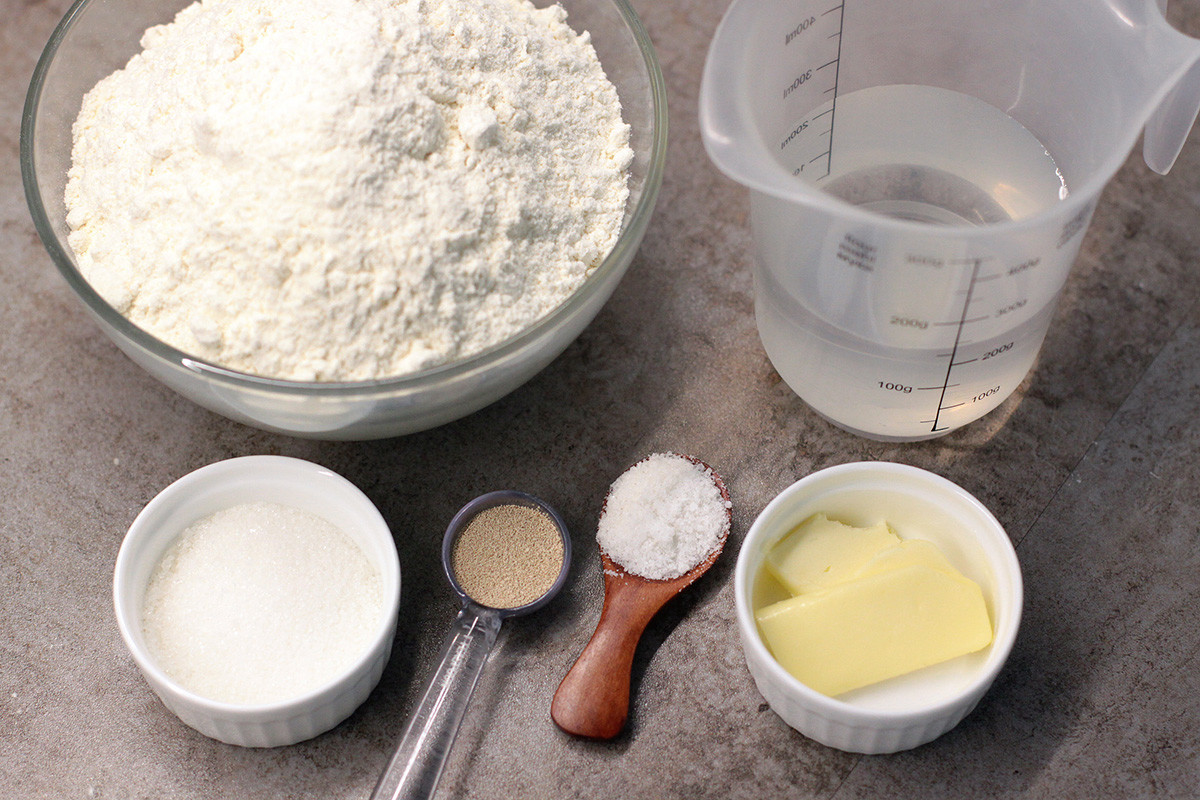 1. For your pre-dough, in a large bowl mix yeast with lukewarm water (around 30°С), add flour and knead for some minutes – the consistency should be quite thick but still elastic. 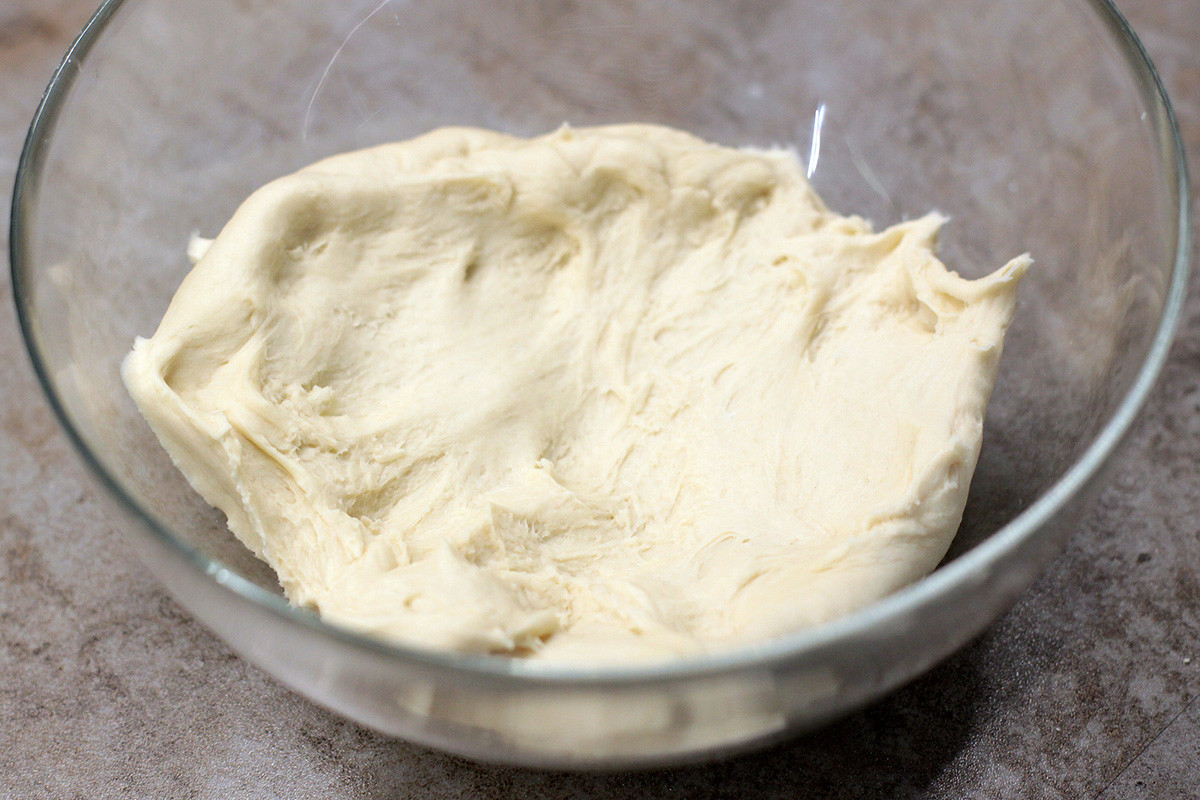 2. Spread the pre-dough over the bottom of the bowl, cover with cling wrap in a kitchen towel and leave in a warm corner for around 2 hours – the pre-dough is ready when it visibly increases in size and starts slightly going down. 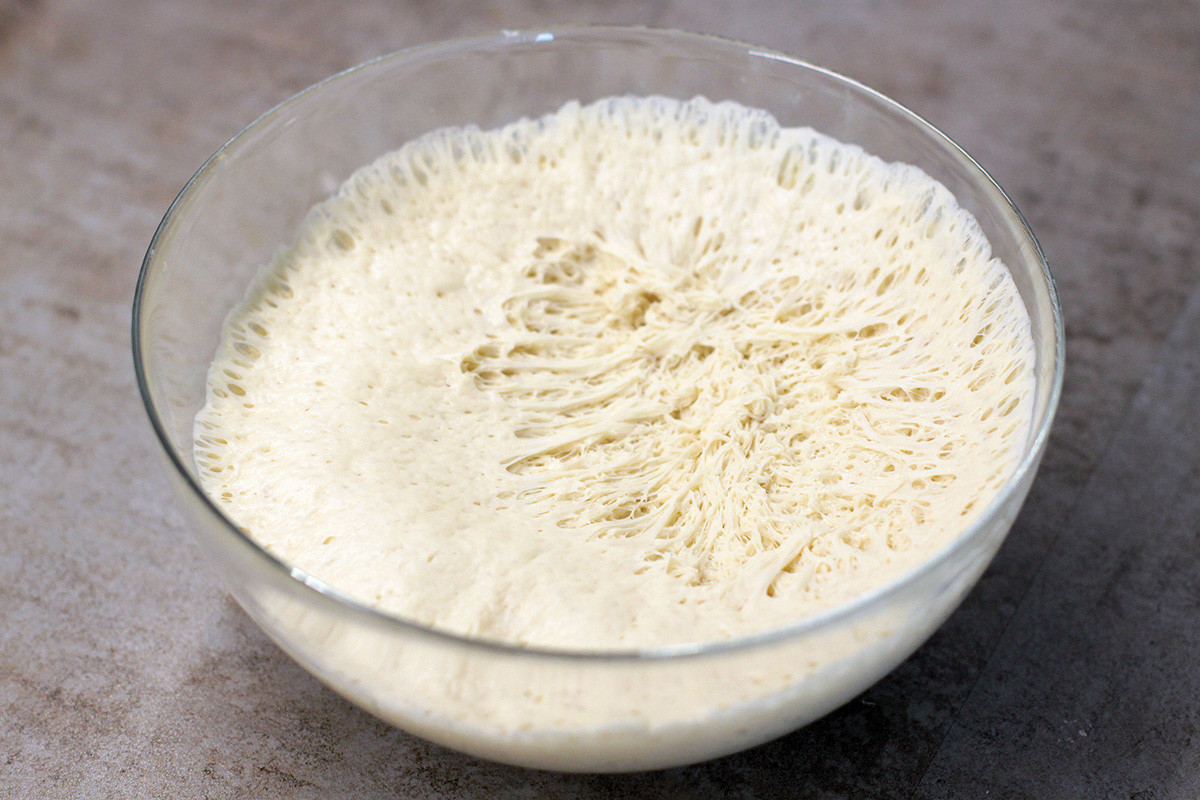 3. Now, let’s make the dough: dissolve sugar and salt in lukewarm water; then pour it in the pre-dough. Next, add flour and soft butter to the mixture and knead the dough for 7-10 minutes until it is elastic and does not stick to your hands at all. 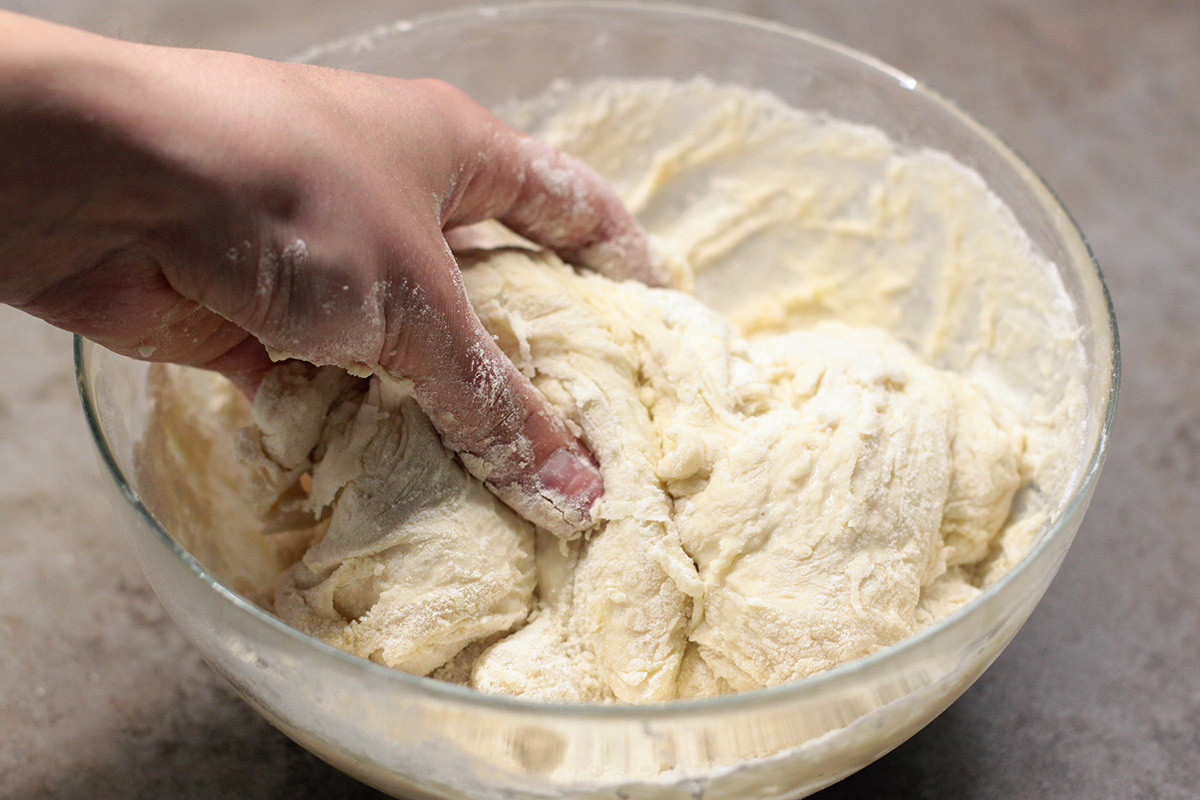 4. Round the dough into a ball and place in a clean bowl lightly greased with oil. 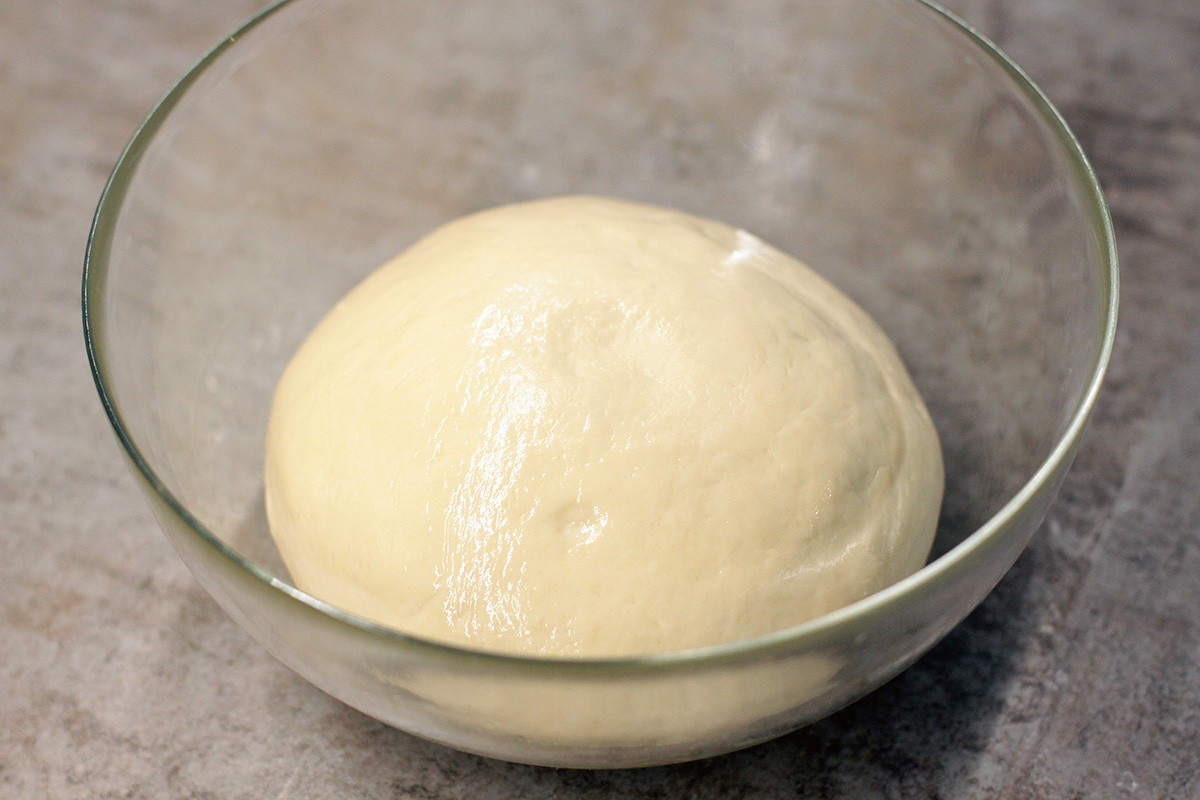 5. Cover with cling wrap, put in a towel again and leave to rise at room temperature for 1.5 hours. 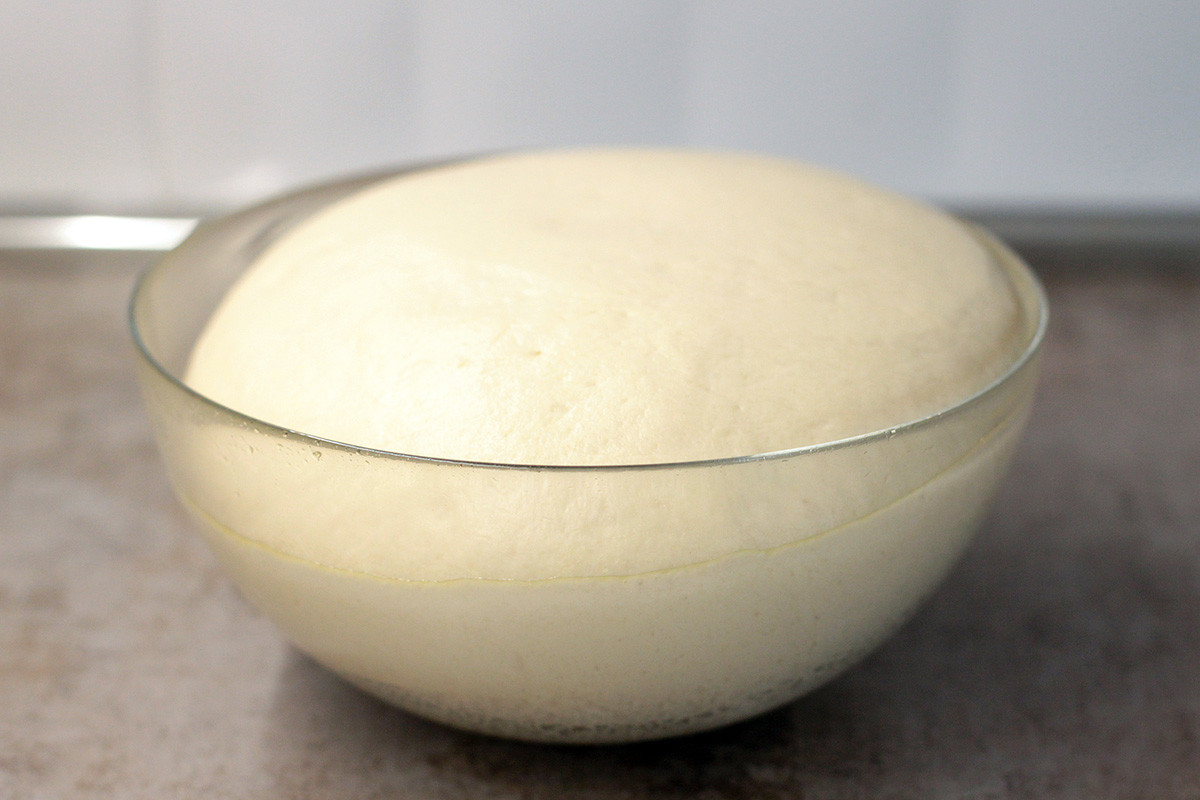 6. When the dough doubles in size, place on the cooking surface, slightly punch it down and divide in three pieces. Round each into a ball, cover with cling wrap and leave for 10 minutes. 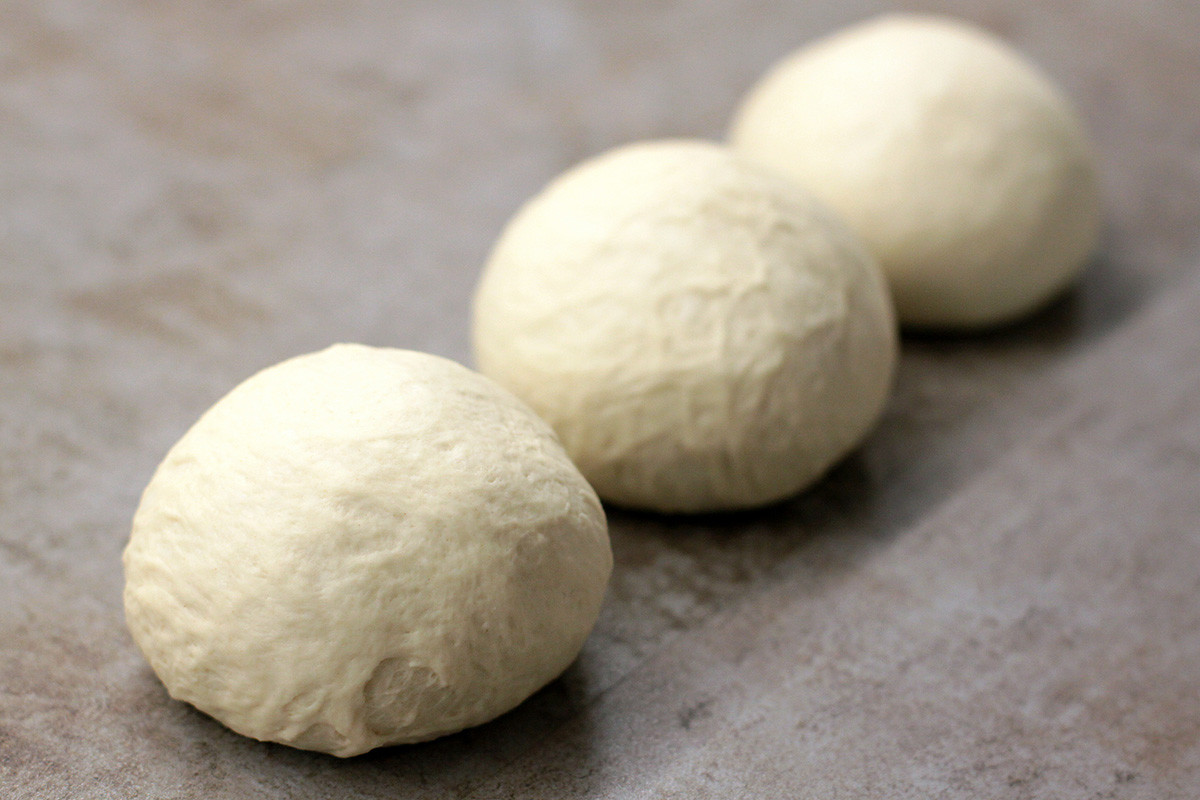 7. To form the iconic shape of city loaf, first slightly roll out a piece of dough that’s 1 cm thick layer. Then, layer it the way it’s shown on the picture. 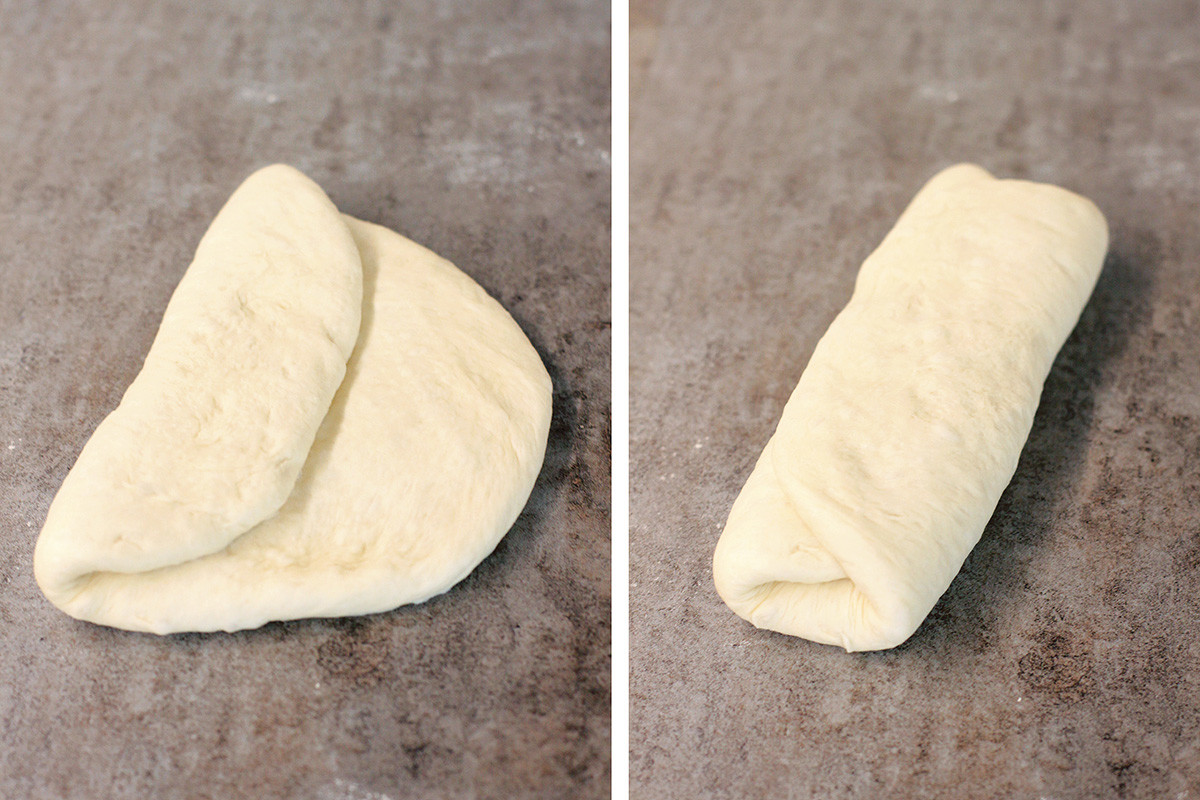 8. Fold the layered piece in half, and seal the seams. It only remains to form the dough into soft oval shape with slightly pointed edges. 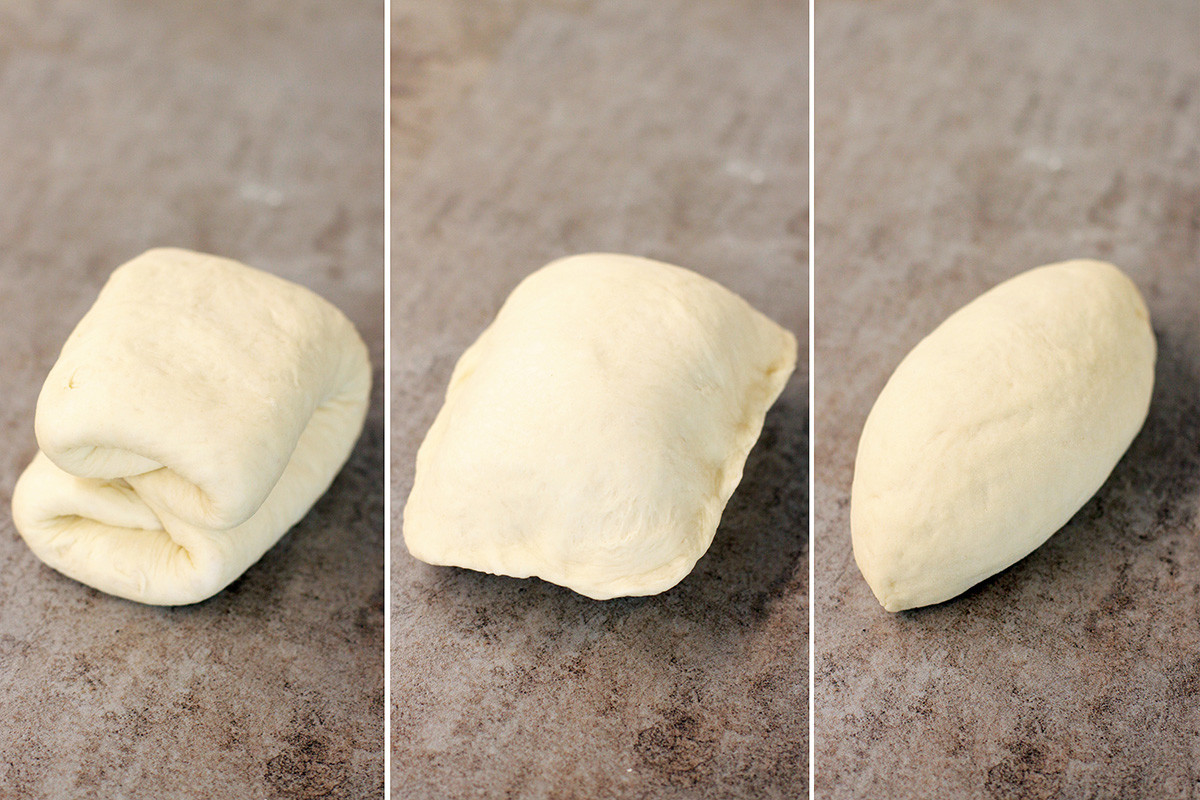 9. Repeat with all the dough pieces and transfer the loaves to a baking tray covered with a sheet of parchment, leaving enough space between to proof. Cover with cling wrap and leave for 45 minutes at room temperature. 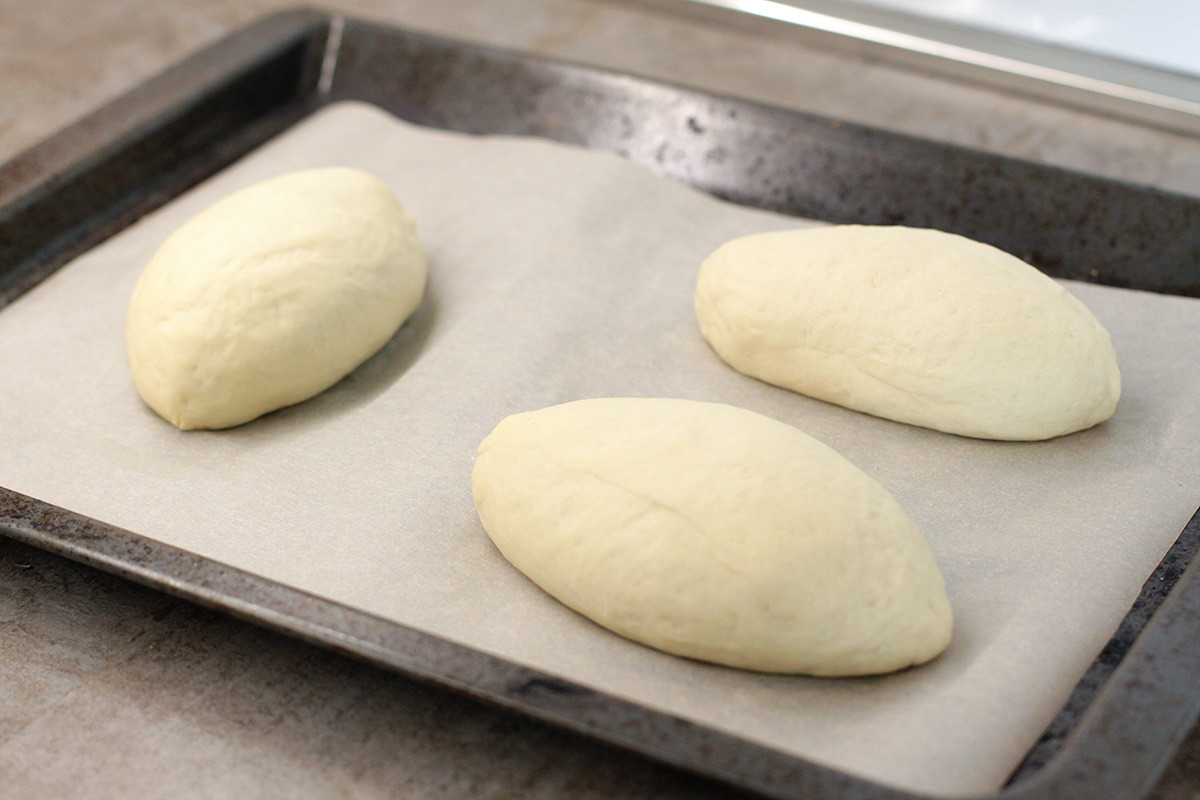 10. Next, make a lengthwise slash on one side of each loaf – use the sharpest knife or a special bread lame. 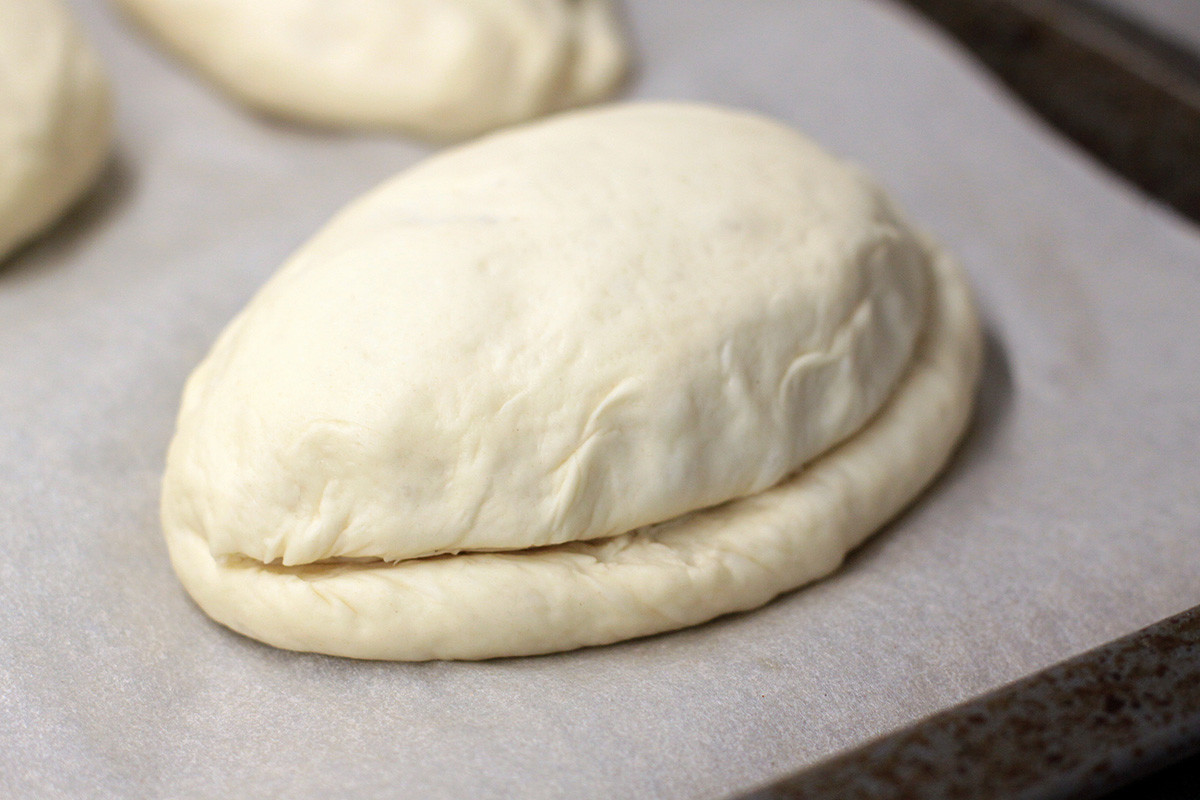 11. The loaves should be baked with some steam, so place an empty baking pan on the bottom rack of the oven and heat to 220°С. When it is heated, place the tray with loaves on the middle rack and carefully pour a cup of hot water in the bottom baking pan; immediately close the oven door. 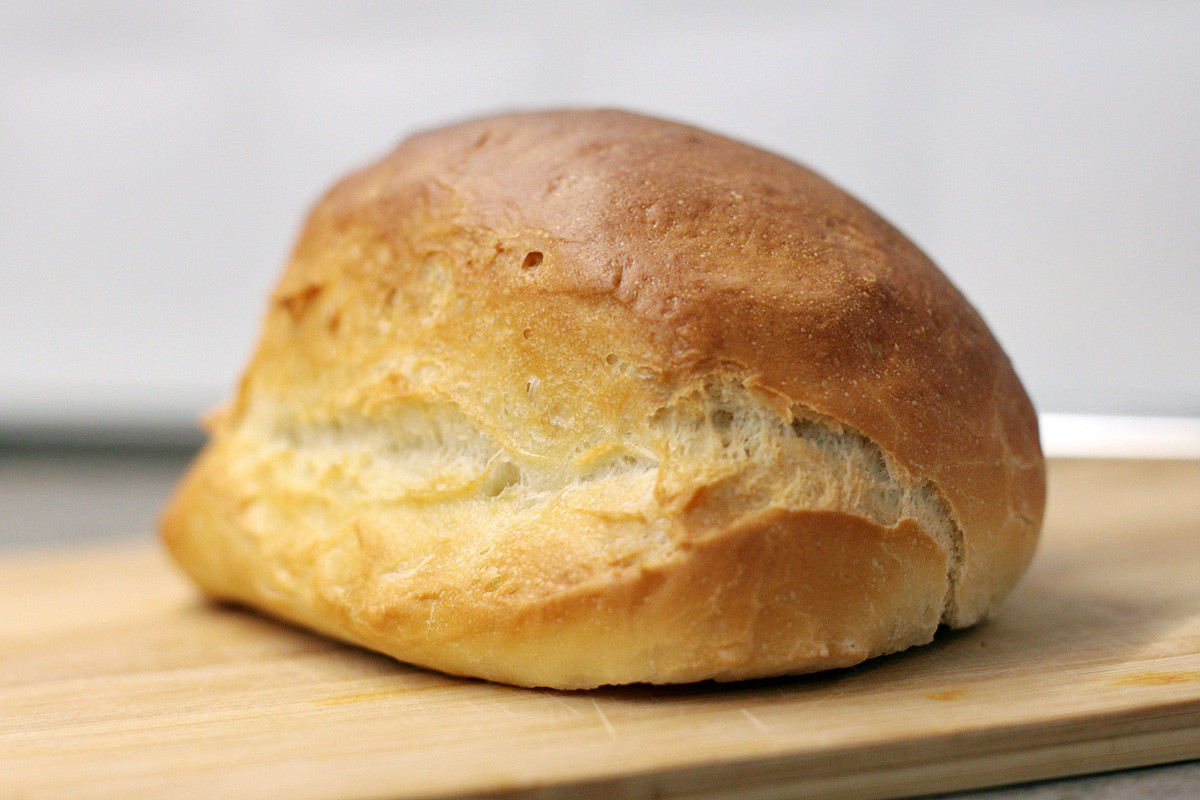 12. The baking time is around 15-20 minutes – depending on your oven. Cook until you see a golden top and it’s fully baked inside, and remove from the oven. Let the loaves completely cool before slicing. Priyatnogo appetita! 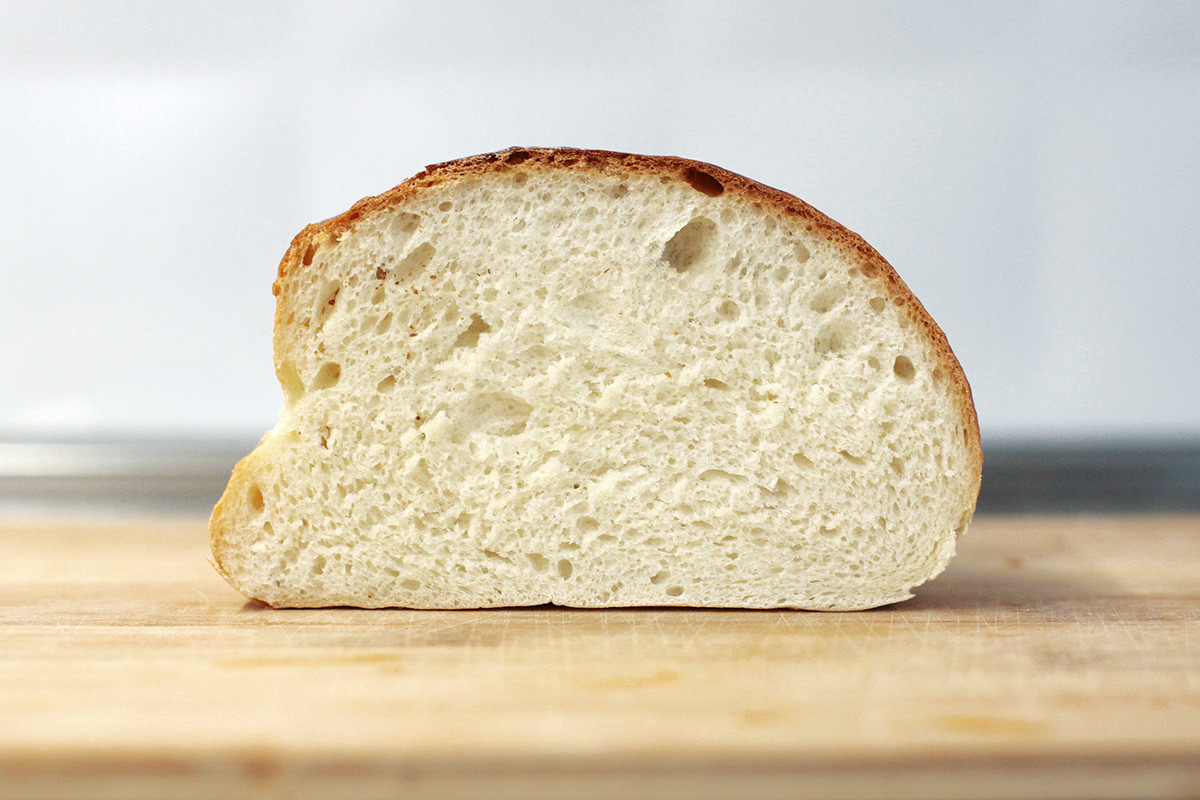